On Friday 30th September, those who joined London's monthly Critical Mass ride, found themselves being issued with letters from the Metropolitan Police, threatening arrests at future Critical Mass rides, unless the 'organisers' give notice of the route at least six days in advance, and warning that the police can impose restrictions on the rides once the advance notice has been given.The letter stated that the police are reviewing their 'policy' towards critcal mass

A callout has been issued to make October's London Critical Mass the biggest one yet. 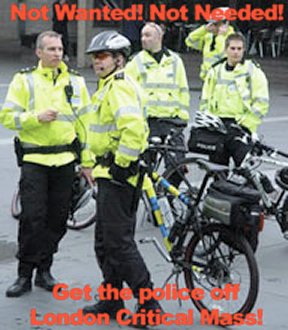 Londoners have held regular Critical Mass rides for the past eleven and a half years, and those who have been on them will know that rides are escorted by coppers on bikes and mootor cycles. It seems unlikely that the police do not understand that their demands are an attack on the very foundations of Critical Mass itself, which can best be described as an "unorganised coincidence". As the ride's website FAQ notes:

Nobody organises CM in the sense that they control the event - what happens at the ride is up to all the individuals. However, as with any project, some individuals are usually more involved than others, for example in printing and distributing leaflets and other publicity, or maintaining this website ;) . However, they only do the work, and don't have any authority over anybody else - their only power is to make suggestions.

Critical Mass rides are held in many cities across the globe, and if there is any one aim, it is a shared wish to see less car-dominated cities and more people cycling. The hallmark of the event is the bringing together of a wide spectrum of cyclists in an spontaneous 'disorganisation' which is not dominated by any political ideology,party, organisation or individual. Any attempt to meet the requirements of the letter would mean that the basic foundations of Critical Mass would be threatened. London Critical Mass however is not alone in facing challenges.

For some months now, cyclists on New York's Critical Mass rides, have been subject to mass arrests with police using tactics such as placing nets across the road and arresting everyone inside the nets.

New Yorkers have persisted with the rides in the face of the arrests and repression and many of those who have gone to court on the exonerated.

On a more positive note, Budapest has just experienced it's largest Critical Mass ever, with 30 000 cyclists joining the ride on September 22nd, 2005. The last year has seen a mushrooming participation in Critical Mass rides in the Hungarian capitol. The initial breakthrough came on World Carfree Day in 2004, when 4,000 riders participated. This was followed by an Earth Day Critical Mass ride on April 22 of this year with a staggering 10,000 people. The trend is still in progress. Bicycle messenger groups are in a large way to credit for organizing and publisizing this event. Otherwise organizations like the Hungarian Young Greens (Zöfi) and Clean Air Action Group have also helped in the organization.