On the 13th, 14th, 15th of February 2006 a court case against two Swiss police officers took place in Nyon, Switzerland. Michael Deiss and Claude Poget were charged with causing bodily harm through negligence. They were in court after nearly killing climbers Martin Shaw and Gesine Wenzel during the protests against the G8 in Evian. On Friday 17 February the verdict of this private prosecution came through with an acquittal of the two policemen [Read verdict press release by Martin and Gesine]. Following this verdict, the activists announced that they will appeal against this whitewash of police violence.

In June 2003, an affinity group blockaded the Aubonne Bridge with a climbing action in order to stop a G8 delegation from reaching the summit in Evian. The police cut the climbing rope. As a result both activists were seriously injured, specially Martin Shaw who spent one month in hospital and sustained irreversible injuries. See video and a Photo strory of the event.

Other recent newswire reports: Report of day 3 of the trial | Statement by the Aubonne Support Group on the court proceedings | Activists walk out of court after verdict | Activists appeal against whitewash of police violence. 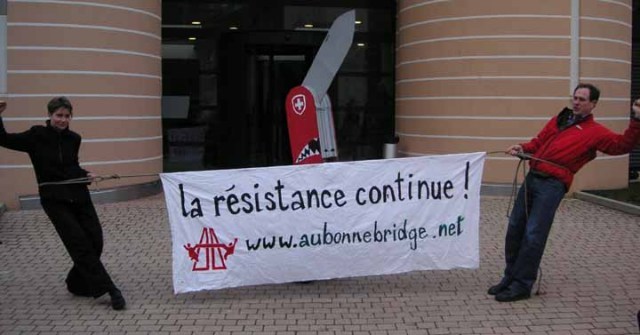 Martin and Gesine outside Nyon's court with a clear message.

Direct reaction of Martin and Gesine, announced after they had left the "hall of justice" in the middle of the verdict being read out:

"What we have seen here during the last three days is exactly the reason why we and thousands of other people like us all over the world think that direct action is the best way to overcome injustice. The entire judicial procedure from the time the rope was cut has been clear whitewash. The prosecution is supposed to defend the law but what they actually defend is the state – and its officers. This court case has been an elaborate, expensive and time-consuming piece of theatre to provide a platform to find excuses for inexcusable actions and to misguide the public by pretending to provide justice.
This verdict is a pure cover up of police brutality by the justice system and is just further proof of the almost complete police impunity in Switzerland." [Read full Press Release]

Unfortunatelly this was not the only case of police brutality during the mobilizations against the G8 Summit in Evian. In a separate incident, photographer Guy Smallman needed a two hour long operation after police fired a stun grendade at his leg. A legal case over this is still ongoing in Switzerland. [Report of the event | Photo sequence of the shooting | Video of Guy being shot]

Report from the Aubonne Support Group:

Activists walk out of court as Swiss Police found not guilty after nearly killing climbers at G8 Protests, 2003

Today, (17.2.2006) the facade of a trial against the police ended in a not guilty verdict with little chance of their victims ever receiving compensation. As the verdict was read out this lunchtime the activists walked out of court shouting that they had had enough of this bullshit. The whitewashed trial of two police officers in Switzerland, acquitted of the charges of causing severe bodily harm. The two victims narrowly escaped with their lives after a police officer cut a climbing rope during a protest action against the G8 in Evian, France in 2003. Despite clear video evidence that the police officers had cut the rope the judge supported police impunity by ruling that they had made mistakes but that these were understandable in the context of the stress they were under!

Only 3% of incidents involving police brutality are brought to trial in Switzerland, and even then there is only a 0.08 % conviction rate so the odds were always against us. We only got as far as we did because of the support and solidarity of many people and it has shown us the importance of this. It was seen as a monetous occasion to see the police in court at all, (its never ahppened in that part of Switzerland before!)

Verdicts like this clearly show that you can’t expect justice from the courts or protection from the police and show that we are right to have no faith in our so called justice system, (the reason why direct action was used to blockade the Aubonne Bridge in the first place!)

This is one small instance of repression and injustice, from the 29 police-officers currently standing trial for acts of appalling brutality at the G8 summit in Genoa, Italy in 2001, to the massive display of police and military force recently in Gleneagles, Scotland, the G8 is having to use enormous amounts of force to protect itself against the ever increasing amounts of people that challenge its legitimacy.

As part of the mobilisation against the G8 in June 2003, two climbers hung from a rope across the Aubonne Bridge in order to stop a G8 delegation from reaching the summit in Evian, France. The police cut the climbing rope and nearly killed two activists. Martin fell 25 m and broke his back, his pelvis and shattered his foot. Despite five operations, he will never make a complete recovery. Gesine, was saved when members of her affinity group grabbed her rope seconds before she fell. She has suffered from severe post-traumatic stress disorder and has had to undergo intensive treatment. [Photos of the action 1 | 2 | 3 | 4]

Many solidarity actions and campaigning took place after the incident and again around the court case AGAINST the activists in May 2004. At the trial in 2004 the activists were found guilty of blocking the road and endangering the lives of the drivers. Shortly afterwards the investigating judge decided to effectively drop the case against the police. Only after an appeal and a great deal of public pressure did the high court overturn his decision and allow for the case to go ahead.

The Trial against the police.

The court case against the police had the same judge who gave the activists suspended prison sentences so there was not much hope of a fair trial. The lack any genuine defence was illustrated by the fact that one of the main arguments used in favour of the police was simply that the climbers would not have been cut down if they had not been hanging there in the first place. BRILLIANT. They made out that despite many months of preparation and training they were completely unprepared for the possibility that people might blockade the motorway, despite the fact that they other security forces were stationed as lookouts on other bridges nearby.

Even if the charges against the police had been proven, there would have only be minor penalties, like fines or short sentences on probation. The Aubonne Bridge campaign from the very beginning has demanded the suspension of the two police officers involved, an independent investigation into the repression that took place during the G8 and compensation for those who were seriously injured. It is likely that the Canton de Vaud will now never pay a penny.

Protesters and press journalists gathered outside the court in Lausanne Switzerland, to hear the verdict of the case against the two policemen. Several wore big cardboard Swiss army knives on their backs to demonstrate that the Swiss police are killing people and that the justice system afterwards stabs them in the back. Other protesters were dressed as cleaners and started helping the court in their whitewash, cleaning the court with sponges and toothbrushes. Martin and Gesine, the two activists cut from the rope in over two years ago held a banner saying: “The justice system whitewashes police brutality”. The courtroom was filled with press and protesters as the judge read his 23 page judgement. As he began the judge, Pierre Bruttin, stated that in his court there is no police impunity, and that the court had considered the whole case with great caution and decided only on the basis of the facts and the law. It soon became clear that he was just repeating the arguments of the defense and the prosecution, contradicting all the arguments of the civil party and not considering the most critical points. He argued that the cutting of the rope was provoked by the temerity of the activists, and that while objectively the police has made mistakes, subjectively it had to be understood because they were under such great stress at the time. Video evidence shown in court, clearly shows that it was the actions of the police officers arriving on the scene that provoked the tension and the chaos not the other way around.

At this point Gesine and Martin decided that they had had enough. They stood up, unfurling a banner saying “Police partout, justice nul part”, (police everywhere, justice nowhere) and declared, - “we are going, we have heard enough bullshit, lies and excuses” – and left the courtroom followed by their supporters. Outside the climbers made a statement in front of the TV cameras saying that this was just further evidence of police impunity in Switzerland and that it was clear that the justice systems covers up police brutality. Shortly afterwards the rest of the public and lawyers came outside. Asked what he thought of the acquittal the lawyer said that, “It is a judicial scandal that such behaviour can be excused by stress and impulsiveness.”

The climbers read out this declaration in front of the court:

“What we have seen here during the last three days is exactly the reason why we and thousands of other people like us all over the world think that direct action is the best way to overcome injustice. The entire judicial procedure from the time the rope was cut has been clear whitewash. The prosecution is supposed to defend the law but what they actually defend is the state – and its officers. This court case has been an elaborate, expensive and time-consuming piece of theatre to provide a platform to find excuses for inexcusable actions and to misguide the public by pretending to provide justice. This verdict is a pure cover up of police brutality by the justice system and is just further proof of the almost complete police impunity in Switzerland.”