A number of Palestine Solidarity activists blocaded the UK headquarters of Israeli company Carmel-Agrexco for over 11 hours on 30 August, 2006, to gain ruling on the legality of trading with Israeli settlements [see report]. The purpose of the protest was to expose an Israeli company that is engaging in continuous unlawful and brutal activity by importing fresh produce originating from illegal Israeli settlements in the Occupied Palestinian Territories. Carmel-Agrexco, however, chose to withstand the disruption and not have the blockaders charged with 'aggravated trespass'. At the end of the day only one activist was arrested and subsequently de-arrested.

The method of protest was to construct two large metal triangular cages at each entrance. Protestors secured their necks to the cages by using bicycle D-Locks, with several supporters close at hand. One cage served to totally shut down the exit, and the other caused major disruption at the entrance.

Read: Text of letter to Carmel-Agrexco | Press release from previous trial | Report on Carmel's involvement in the Jordan Valley | War on Want's report: Profiting from the Occupation | previous actions: 1 | 2 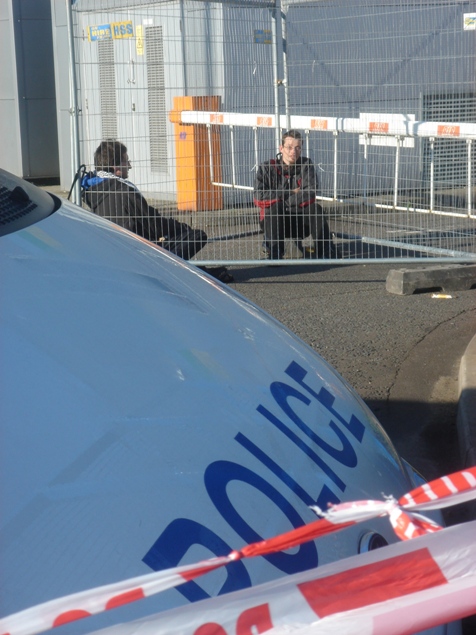