On Wednesday around 50 protesters including the rhythms of resistance samba band turned out to 'greet' Mike Baunton, the Vice President of Caterpillar, who was due to speak at the Institute of Mechanical Engineers' Annual Dinner. The function was held in the ballroom of the Grosvenor House Hotel.Caterpillar hold the sole contract for the supply of military D9 bulldozers to the Israeli army. Caterpillar machines are used to destroy Palestinian homes in acts of collective punishment, build checkpoints and roadblocks to restrict civilian movement, build illegal Israeli colonies on Palestinian lands, destroy Palestinian olive trees and agricultural land, build the illegal annexation wall and murder civilians. 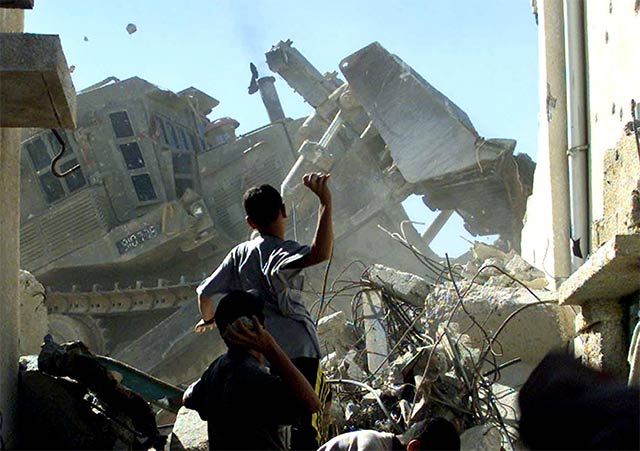 Since 2003 a campaign, triggered by the murder of ISM activist Rachel Corrie, has been building to force Caterpillar to end all contracts with Israel. People have taken action in the UK, the US and all over Europe.

Due to pressure from campaigners and rebuke from the U.N., Caterpillar have been forced to make public statements about the use of the D9 by the Israeli army. Caterpillar’s position is that they no longer supply D9’s to Israel but they will not say whether they supply parts to maintain the Israeli army’s existing D9s.

Protesters originally gathered at the back and front entrances of Grosvenor House. The police issued a highly dubious Section 14 (Public Order Act 1984) order. Restricting protest to the front of the hotel. The main purpose of the order seemed to be to make things easier for the police to control the protest. However, the order was never fully enforced and there was a constant activist presence at the back of the hotel.

Participants included the Palestine Solidarity Campaign, Jewish Socialist Group, Jews For Justice for Palestinians, War on Want, Architect and planners for Justice in Palestine, Rhythms of Resistance, International Solidarity Movement a member of the Institute of Mechanical Engineers and an insurgent clown.

The police were petty and controlling throughout, corralling activists in a pen and threatening arrests for blocking the pavement. However, the event was a success with all delegates to the event hearing the message of protest against the decision to invite Michael Baunton.

Wednesday’s protest was part of a long running worldwide campaign against Caterkiller. As well as being the IDF’s weapon of choice in Palestine Caterpillar bulldozers have been used by Robert Mugabe to bulldoze the homes of 300 000 Zimbabwean slum dwellers, leaving thousands homeless, and by the Mexican stateto bulldoze the Oaxaca barricades after the recent rebellion.

Caterpillar use their easily recognizable trademark to sell clothing and footwear worldwide, operating through the Wolvine subsidiary. Campaigners against the company have tried to inform consumers about the companies’ human rights record in countless creative high street actions

UK campaigners have held a series of occupations and protest at Caterpillar HQs around the country [1|2|3|4]. Many protests have been focused on Caterpillar’s European financial Headquarters in Solihull [1|2|3] where activists have attempted to deliver a ‘Homewrecker of the Year Award’ to Caterpillar management.

Around this time Caterpillar employed the services of the Inkerman Group, an Ashford and Knightsbridge based ‘counter-terrorism’ group, to investigate activists campaigning against the company. Caterpillar are an arms company, making tank engines and other military equipment as well as military bulldozers. They are an exhibitor a DSEI, Europe’s biggest arms fair, held in London biannually.

Activists have tried to blacken Caterpillar’s brand wherever they try to promote themselves organizing protest at trade fairs around the UK,[1|2] Many councils and universities have sizable investments in Caterpillar, resulting in a number of campaigns for divestment.

Caterpillar has attracted criticism from the UN over its continued supply of weapon’s to Israel, and actions have taken place in Europe and the USA. The US AGM of the corporation this year was dominated by the companies record in the Middle East

All of this has led Caterpillar to announce that it will not continue selling D9s to Israel, but the company refuses to confirm whether it supplies spares to maintain existing D9s. Caterpillar machines continue to be used in Palestine and protestors continue to apply pressure on the comapny.

The campaign against Caterkiller is part of the worldwide campaign for Boycott, Divestment and Sanctions against Apartheid Israel. On 9 June, 2005, a coalition of Palestinian Civil Society Organisations issued a “call for boycott, divestment and sanctions against Israel until it complies with international law’ after the International Court of Justice in the Hague deemed Israel’s annexation wall illegal. The Palestinian boycott call urges activists to campaign against companies who profit from the Israeli occupation.

video - -should work this time 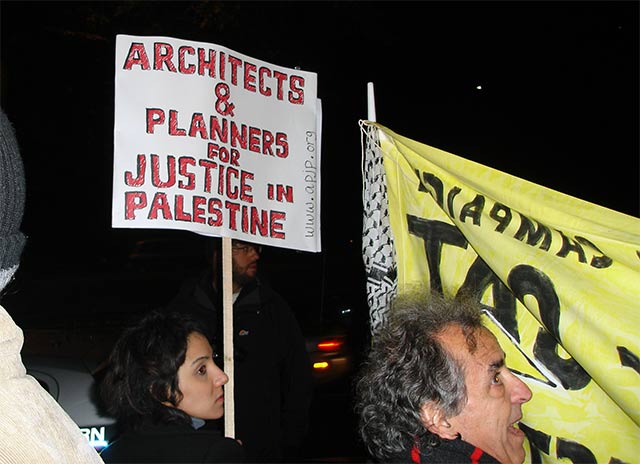 Architects and Planners for Justice in Palestine 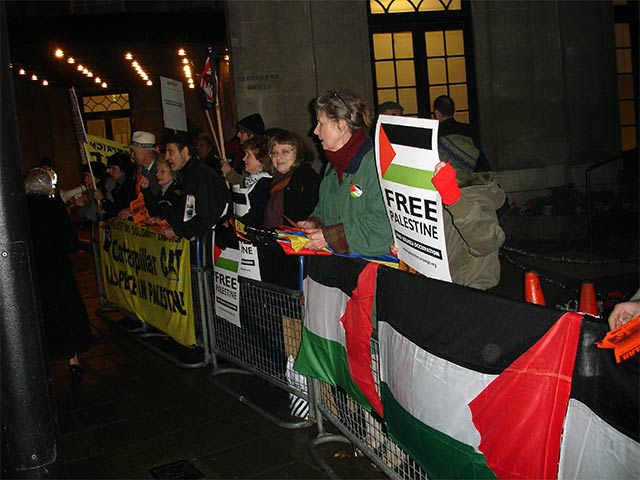 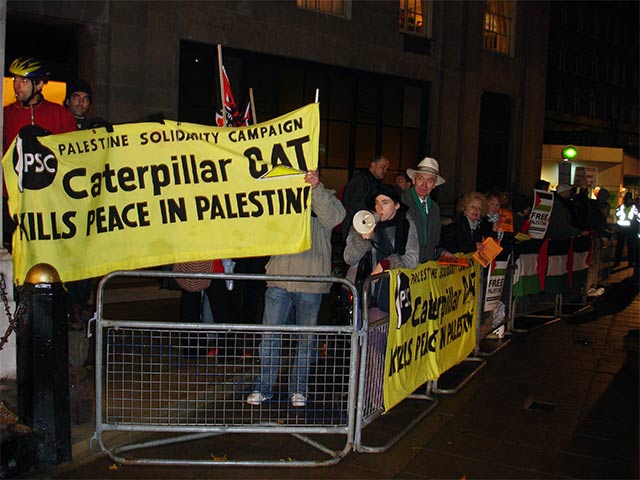 Caterpillar you are the weakest link