Campaign Iran has pointed out that the current media spin about Iran, some of which appears to originate from MI6, bears more than a passing resemblance to the WMD hype that preceded the ongoing slaughter of 650,000+ Iraqis. So are we on the verge of a massive escalation of the criminal US-UK imperial war?

There have been many warnings [ 1 | 2 | 3 | 4 | 5 ] about the possible use of US or Israeli nuclear weapons against Iran. Furthermore, Michel Chossudovsky of Global Research has warned that this is just one part of the US "military roadmap" for the Middle East [ text | video | audio ], while Nafeez Mosaddeq Ahmed wrote last summer that the war had already started.

Needless to say, a war on Iran would be illegal, and would only add to the long list of war crimes that Bush, Blair and their conspirators are guilty of. But then, what would legality matter if we became a planet of the nuclear dead?

On 9th Feburary 2007 Iranian refugees dropped a banner in Birmingham with the slogan "Support movement for democracy in Iran, No to criminal regime in Iran, No to imperialist war on Iran". 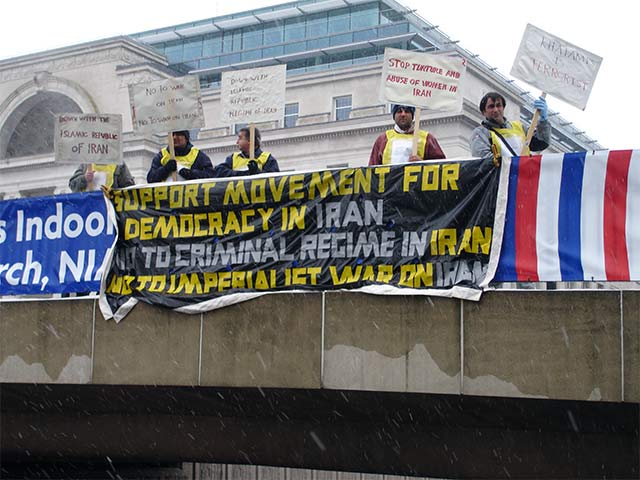 On 24 April, 2006, John Pilger wrote in the New Statesman: “We now know that the BBC and other British media were used by MI6, the secret intelligence service. In what was called ‘Operation Mass Appeal‘, MI6 agents planted stories about Saddam Hussein's weapons of mass destruction - such as weapons hidden in his palaces and in secret underground bunkers. All these stories were fake.”

In an almost exact repeat of those events in 2002 and 2003, the British mainstream media are now reflexively boosting the US claim that Iran presents a threat to the West. Even as the staggering catastrophe in Iraq continues to be played out, the BBC and other media are yet again preparing the public mind for more war. If the public can be convinced that this latest 'threat' is real, then politicians can again unleash their bombers with impunity (see these examples: BBC2's Newsnight | BBC’s support for US war propaganda on Iran | Is The Independent for or against a military attack on Iran?)

A report, put together by Campaign Iran and published at the end of 2006, revealed that Daily Telegraph's political editor Con Coughlin, the man who 'broke the story' of Iraq’s 45 minute WMD capacity, was behind 16 articles containing unsubstantiated allegations against Iran over the past 12 months. The Press Complaints Commission has launched its third investigation into Coughlin in as many months after a number of high level complaints about his latest article on Iran. The investigation is looking at an article by Coughlin on 24 January relying on an unnamed "European defence official" alleging that North Korea is helping Iran prepare a nuclear weapons test.

Back in 2000, the British Journalism Review remarked that "officers of MI6... had been supplying Coughlin with material for years." It is known that the MI6 has a shadowy programme called "I/Ops" (Information Operations), whose activities within Fleet Street have never before been so clearly exposed.

Following the publication of the "American dossier", which allegedly took 14 months to compile, the White House was challenged to retract accusations by senior US defence officials that the "highest levels" of the Iranian government were supplying sophisticated roadside bombs to Iraqi insurgents. The call came from a group of academics and Middle East experts, brought together by Campaign Iran, who described the latest allegations as "highly implausible and deeply misleading." (see also Neocon Iranian Mortar Ruse Fizzles | Neocon Flubs Keep On Rolling: Iran Does Not Manufacture 81MM Mortar Shells)

What is it really about?

Well, it's clearly not about Iran's nuclear plants that the US had sold to Iran in the first place. Nor is it about the alleged nuclear weapons development any more than the war against Iraq was about Iraq's never-found WMD. No substantive evidence has ever been found by the International Atomic Energy Agency (IAEA) suggesting that Iran has a covert nuclear weapons programme (see here for more details).

In December 2006, William Clark published a long article analysing the real reasons for a possible attack on Iran. Under the title "Hysteria Over Iran and a New Cold War with Russia: Peak Oil, Petrocurrencies and the Emerging Multi-Polar World", it touched on some issues that are not often publicly considered as key motivations for the imperial war, namely the Iranian Oil Bourse and the threat to the petrodollar.

Until Saddam Hussein made his decision in the autumn of 2000 to switch to a petroeuro arrangement, efforts by the US and UK to maintain the global petrodollar system were very successful, due in large part to the “special relationship” between Washington and the Saudi monarchy. [...] Following operation "Iraqi Freedom", the other Persian Gulf oil exporter threatening to undermine US supremacy is Iran.

I propose that, despite the ongoing subterfuge, the US and the UK establishment are far more concerned about Iran’s upcoming Internet-based oil exchange, or "oil bourse", which over time could undermine the global supremacy of the petrodollar.

This assertion is based on the fact that Washington is quietly but actively engaged in economic warfare against Tehran. The goal is to undermine the proposed oil bourse via “smart sanctions.” Should this strategy fail, it appears that a military option is under serious consideration by the Bush administration.

Campaign Iran was created in October, 2006, when Action Iran, Iran Solidarity and the Campaign Against Sanctions and Military Intervention in Iran (CASMII UK) merged to form a single organisation. Some on the left, like Yassamine Mather, have been critical of Campaign Iran and its tactics of lobbying Downing Street.

"For Iranian socialists inside and outside the country," Mather wrote, "neither the three components nor the new merged organisation address the essential issues concerning the plight of the Iranian people at a time when the threat of some form of imperialist intervention must be taken seriously. The accusation of appeasing a reactionary regime is echoed by many left activists in Iran."

Yassamine Mather and others have set up another campaign called Hands Off the People of Iran.

Stop the War Before It Starts

The 'godfather' of Neocons, Zbigniew Brzezinski, recently warned that the war could be started with "some provocation in Iraq or a terrorist act in the US blamed on Iran". This is very similar to the 'plan' that Michel Chossudovsky wrote about back in August 2006: "Vice President Dick Cheney is reported to have instructed USSTRATCOM to draw up a contingency plan," which "used the pretext of a 'second 9/11', which has not yet happened, to prepare for a major military operation against Iran."

Yet, as John Pilger wrote, "privileged journalists, scholars and artists, writers and thespians, who sometimes speak about 'freedom of speech', are as silent as a dark West End theatre. What are they waiting for? The declaration of another thousand year Reich, or a mushroom cloud in the Middle East, or both?"

Does this count as MI6 disinformation ?

If so, here is the poster.

Someone seems to agree with me.