Day of Local Action against 'The Oil and Gas Bank'

On 15th October, local groups which formed to mobilise for this year's Camp for Climate Action, took action against the Royal Bank of Scotland, a major backer of the aviation industry and the world's self-described ‘Oil and Gas Bank’. Over 25 protests and actions took place, with Headquaters being targetted, local branches occupied, and many banners displayed letting the public know about the banks role in Climate crimes [Actions round up]

A Sheffield based group wrote; "RBS is helping force open the carbon frontier, financing controversial projects in Nigeria, the Caucasus and Wales. Its involvement in Angolan and Nigerian oil fields encourages corruption and conflict, while gas projects from the Arabian Gulf to the Gulf of Mexico threaten environmental destruction. The thirty oil and gas finance deals RBS signed between 2001 and 2006 locked us all into 655 million tonnes of emissions over the next 15 years, more than the UK’s entire annual emissions."

Report (pdf): 'The Oil and Gas Bank: RBS and the financing of climate change'
Video: Fight the Pipe about the Wales gas pipeline part financed by RBS. 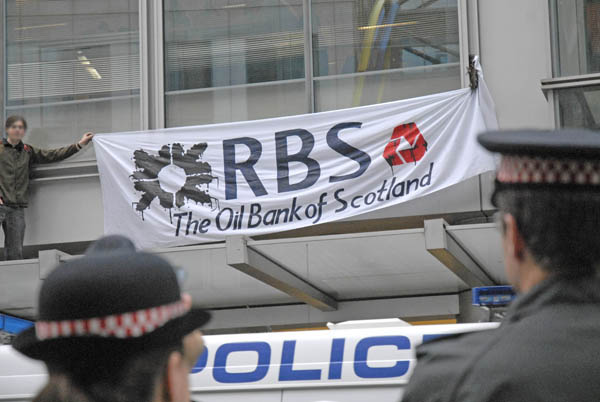 How did he get up there?

RBS provides oil companies with the cash to build and operate drilling rigs, pipelines and oil tankers. And through Aviation Capital, RBS helps airlines to launch ever more planes – and carbon emissions – into the skies. From the Niger Delta to the Arctic, from the North Sea to the Middle East, RBS loans play a key role in forcing open the new carbon frontier, which contributes to environmental destruction, disruption of indigenous peoples and increased conflict across the planet.

RBS is the second-largest bank in Europe and has global assets of over $1120 billion, including UK brands NatWest, Direct Line and Churchill Insurance. Despite creating a heavily greenwashed public image through sponsorship of sports and the arts, RBS activities have major destructive impacts on the environment and society. The thirty oil and gas finance deals RBS signed between 2001 and 2006 locked us all into 655 million tonnes of emissions over the next 15 years, more than the UK’s entire annual emissions.

The financial institutions funnelling cash into fossil fuel projects have stood in the shadows for far too long. They may be many miles removed from oil rigs and runways, safely ensconced in shiny glass towers, but if the profit motive is at the heart of the climate crisis, the banks are as culpable as the oil and airline industries.

More protests, pranks and propagandising have been reported since Monday:

A group held a musical demo outside the RBS branch in Plymouth, a travelling bard treated passengers and staff on the RBS-sponsored Heathrow Express train from Paddington to a song and a gentle rant, Reading Rising Tide held a demo at the Reading RBS branch, a group of 5 held a demo in Leamington, cash-points were stickered with anti-RBS stickers in Leicester and leaflets were stuck on lampposts in Altrincham!

Plus here's the text of the press release that was sent out on Monday:

Today, over 100 climate change activists targeted Royal Bank of Scotland branches, offices and headquarters around the country in protest at the company’s massive investment in the oil and gas industries.

Demonstrations took place at the RBS headquarters in Edinburgh, London and Manchester, and at branches in Norwich, Sheffield and Truro.

Branches were locked shut overnight in Norwich and Edinburgh, delaying the start of the business day. Signs reading ‘This Company is Out of Order’ were placed on fifteen cash machines in central London.

The demonstrations were part of a national day of action called by the UK Rising Tide network (1), as a follow-up to August’s Camp for Climate Action at Heathrow (2).

‘Today’s protests have been hugely successful. Together, we have shown RBS that their role in financing climate change is now in the public spotlight. In cities and towns around the country, we have made sure that RBS customers, staff and the public know that RBS, more than any other bank, is providing the financial fuel driving climate change’, said Nathan Lewis, an activist from Sheffield.

RBS calls itself the ‘Oil and Gas Bank’, and is the primary UK funder of fossil fuel extraction. The thirty oil and gas finance deals RBS signed between 2001 and 2006 will create 655 million tonnes of carbon emissions over the next 15 years, which is more than the UK’s entire annual emissions. (3)

‘Banks like RBS who profit handsomely from climate-destroying projects have stood in the shadows for too long, but they are as guilty as the oil companies. If carbon dioxide molecules had corporate tags of responsibility, the atmosphere would be full of RBS logos mingling with those of BP, Exxon and Shell’, said Rebecca Keith, from Norwich.

Reports are still coming in of protests taking place around the country, and more demonstrations are expected later in the day. Please call or email for the latest updates.

1. Rising Tide is a grassroots network that takes creative direct action against the root causes of climate change. www.risingtide.org.uk

2. The Camp for Climate Action took place from 14-12 August 2007 near Heathrow Airport. www.climatecamp.org.uk