A clash between the crew of the Sea Shepherd vessel Steve Irwin, who is in the Southern Ocean to fight the ongoing Japanese whaling slaughter near the Antarctic, turned violent when the Japanese Coast Guard began to throw flash grenades at its crew. Captain Paul Watson of the Sea Shepherd ship was struck by a bullet in the chest. Fortunately, the bullet was stopped by his Kevlar vest.

Other injuries were sustained by crewmembers Australian Ashley Dunn and Ralph Lowe. Dunn suffered a hip injury as he tried to get out of the way of the exploding grenades. Lowe received bruises to his back when one of the flash grenades exploded behind him. Japan is denying that any bullets have been fired, saying "warning devices" were thrown after their ship was attacked. According to the Japanese foreign ministry their coastguard on board on of the whaling ships had thrown a "baseball-sized device, which exploded near the activists' ship emitting a loud noise". However, the Sea Shepherd Conservation Society has posted a video on their website, clearly showing devices being thrown from the whaling ship exploding and a bullet being recovered from Paul Watson's jacket. One UK activist (from Nottingham) is also onboard the ship, but it has not been reported he suffered any injuries.

Video: Of the incident, made by the Sea Shepherd 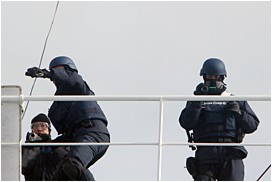 The Steve Irwin has been in hot persuit of the Japanese whaling fleet since December. After being forced to return back to Melbourne early February to refuel, the ship has been out again and managed to re-locate the whaling fleet on 23 February and has been chasing it across the Southern Ocean ever since. On 27 February the Sea Shepherd received a message from the Australian Government outlining that; "As the Australian Government has previously outlined, now that the monitoring mission of the Oceanic Viking [Australian costums ship] has been completed, neither protest nor whaling vessels can in any way assume that the Australian Government will be in a position to respond immediately in the event of any serious incident." The response of the Sea Shepherd's Captain Paul Watson was; "Last month it was the Japanese who requested that the Oceanic Viking remove two of my crew and return them to the Steve Irwin. I made no such request but I was willing to cooperate with both the Japanese Captain and the Captain of the Oceanic Viking to have the men transferred back to my ship. I do not expect to and I will not request Australia to intervene in the event any of my crew are once again held hostage by the Japanese. I would find it interesting to see how Australia would react to having an Australian citizen seized in the territorial waters of Australia by illegal Japanese whalers and taken against their will to Japan."

Japan has made it clear that any of the Sea Shepherd's crewmembers seized by their crews will be returned to Japan for prosecution for interfering with their whaling operations. In a response to this, Captain Paul Watson wrote; "It will be interesting to see what the Australian government will or will not do if Japanese whale poachers seize Australian citizens in Australian waters for protecting whales in support of an Australian Federal Court order prohibiting the killing of whales by Japan in these same waters. Australia will effectively become a vassal state to Japan having already ceded armed control of the territorial waters to the Japanese Coast Guard. What a disgrace that will be to see Australian whale defenders put on trial in Japan, by poachers specifically prohibited from whaling BY Australian law, for upholding the law in Australian territory."

Four of the Australian crew members onboard the Steve Irwin have made it clear that they will be willing to be taken back to Japan as captives. On of them, Jeff Hansen, 34, of Fremantle said; "I am an educated citizen who knows that the Australian government will not end whaling in Australian waters by Japan unless they act to uphold the law and the concerns of the Australian people who want this annual slaughter to be ended. This is an Australian Whale Sanctuary and I am risking my life to protect it and I am prepared to be taken prisoner by the Japanese whalers and hauled off to court in Tokyo if that is what it takes to end this on-going crime against the whales, against Australia and the world. If this effort requires me to make a personal sacrifice than that is what I am prepared to do. This issue is the Gallipoli of our generation and we must resist this invasion by Japanese poachers." The Sea Shepherd Conservation Society has said it has retained a lawyer in Tokyo and is prepared to cover the legal costs of defending our crew in Japan if need be.

On the 2 March the Steve Irwin had reportedly shaken off one of the ship from the whaling ship which had tailed them for over 1000 miles across the oceans. The Sea Shepherd ship then managed to locate the main factory/processing ship of the whaling fleet, the Nisshin Maru and engaged in a confrontation with it. The Nisshin Maru could not outrun the Steve Irwin and after a 12 hour chase the Sea Shepherd ship finally closed the gap and passed alongside the Nisshin Maru. The crew deployed over two dozen bottles of rotten butter sending a stench throughout the whale killing ship that will remain for days. The crew also threw packets of a slippery chemical onto the deck of the Nisshin Maru. This is supposed to make it very difficult to cut up whales. The substance becomes even more slippery with water so it will be difficult to wash it off the decks.

The Sea Shepherd crew state very clearly why they are targetting the Japanese. The whalers are in violation of international conservation law by targeting endangered species in an established whale sanctuary and in violation of a global moratorium on commercial whaling. Australia have also just passed a court ruling barring Japanese whalers from the Australian Antarctic Economic Exclusion Zone.