A Nottingham resident who joined the Sea Shepherd Conservation Society as part of their crew on the vessel Steve Irwin has returned home. Dan, who has volunteered with Sea Shepherd previously, rejoined in the middle of this year's anti-whaling mission against the continued Japanese whale hunting activities in the Southern Ocean. Named Operation Migaloo, after the only known albino humpback in the world, this was Sea Shepherd's fourth expedition to the remote southern waters off the coast of Antarctica and has been typically eventful.

In January, two Sea Shepherd volunteers were taken hostage by Japanese whalers. Then in March, several of the crew were injured when the Japanese military threw grenades onto the ship and opened fire on them. The Sea Shepherd ship Steve Irwin covered a total of 20,090 nautical miles (37,205 kilometers) during Opertaion Migaloo and made 3 return trips from Melbourne, Australia to the coast of Antarctica in 3½ months. In total, the ship was at sea for 83 days between December 5, 2007 and March 15, 2008. It is estimated that due to continued harrasment by the Sea Shepherd, the Japanese have not managed to get even half their whale quota this hunting season.

Interviews with Dan: Back in Nottingham (audio) | On board the ship (text) 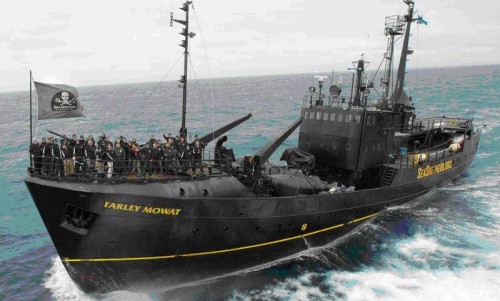 The incident in January, which took place prior to Dan joining the crew, occured on January 15 after the activists Benjamin Potts and Giles Lane boarded the Yushin Marun No. 2 to deliver a letter to the vessel's captain. This stated that the whalers were violating international conservation law by targeting endangered species in an established whale sanctuary and in violation of a global moratorium on commercial whaling. The hostages were released on January 17 and transferred to the Australian Customs vessel Oceanic Viking before returning to the Steve Irwin. Both men reported that although they were roughed up when they first boarded the whaling ship, that they were treated well during their time onboard. The only injury was a bruised wrist suffered by Lane.

The more recent violence took place after the Steve Irwin had managed to catch up with and confront the main factory/processing ship of the Japanese whaling fleet, the Nisshin Maru. The subsequent attack by Japanese coastguard involved the use of flash grenades. The Captain of the Sea Shepherd ship, Paul Watson, was struck by a bullet in the chest, but fortunately this was stopped by his kevlar vest. Other injuries were sustained by Australian crewmembers Ashley Dunn and Ralph Lowe. Dunn suffered a hip injury as he tried to get out of the way of the exploding grenades while Lowe received bruises to his back when one of the flash grenades exploded behind him. While Dan was onboard during this incident, it has not been reported that he was injured.

Sea Shepherd was founded in 1977 by Paul Watson who had earlier been one of the three instigators of Greenpeace. Watson had come to feel that the tactics employed by that organisation were inadequate. While Greenpeace have a policy of avoiding harm to whaling vessels, Sea Shepherd have a deliberate policy of sinking or sabotaging vessels engaged in illegal whaling.

This confrontational approach has been controversial. Greenpeace refuse to work with them and the FBI dub them "eco-terrorists". Nevertheless, their uncompromising position has found them many supporters, including several high-profile figures. In 2007 the MV Robert Hunter (named after Canadian Robert Hunter, co-founder of the Greenpeace Foundation) was renamed Steve Irwin after the TV naturalist. Irwin had considered joining the vessel on an upcoming voyage to Antarctica shortly before his untimely death, and the decision to rename the vessel was endorsed by his widow Terri.

Although it is most famous for its work defending whales, Sea Shepherd's remit is much broader, incorporating campaigns against poaching, longline fishing, shark finning, seal clubbing, unlawful habitat destruction and climate change. Their confrontation with shark poachers in Guatemala is a key element of the film Sharkwater, recently released in cinemas in the UK and shown at Nottingham's Showcase Cinema.