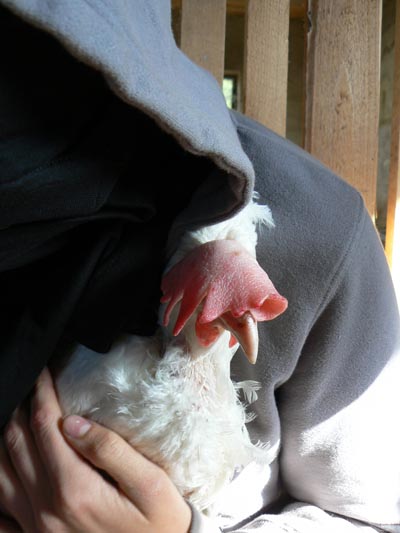 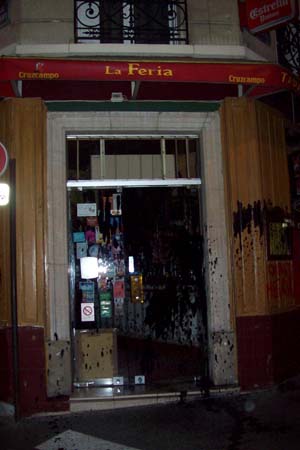 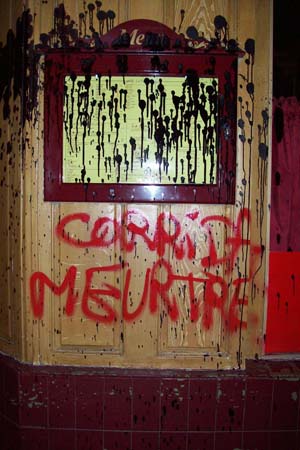 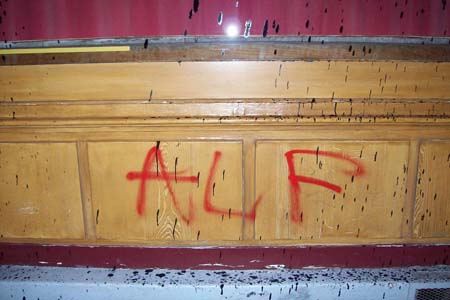 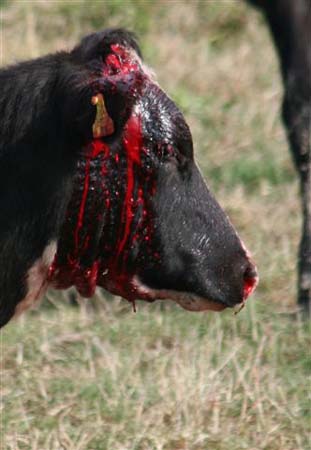 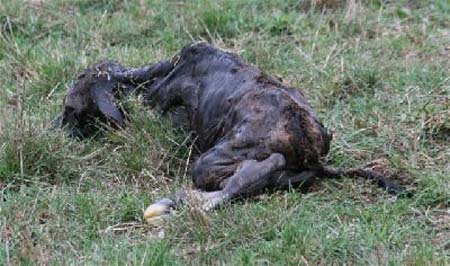 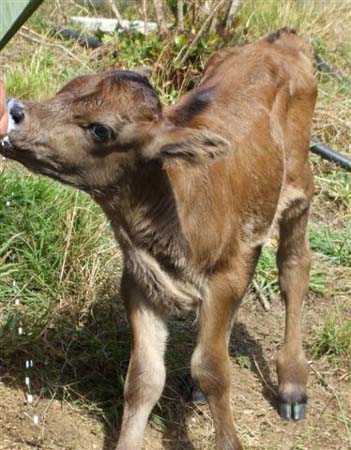 "Four weeks ago while in the Waikato, animal rights activists stumbled across a paddock of recently dehorned ‘dairy’ cattle. The faces of these adult cows were covered in blood as were their tails, the grass, fence posts and water trough. The practice of de-horning ‘dairy’ cattle is very common because slaughter houses commonly will not take cattle whose horns are longer than their ears. Horns can cause damage to the hide and bruising which ‘downgrades’ their flesh and thus are undesirable for economic reasons. Dehorning commonly involves the amputation of the whole horn with guillotine shears, a butcher’s saw, embryotomy wire or scoop dehorners (interlocking semicircular blades).

The Animal Welfare (painful husbandry procedures) Code of Welfare 2005 minimum standards require that all cows dehorned over the age of 9 months are to be administered pain relief. That said all cows under 9 months can have their horns (which have nerves and blood vessels in them) removed without pain relief. The code also recommends that wound dressing or medication should be applied to the cut horns to prevent infection and excessive blood loss. In this case excessive blood loss appears to have occurred. Many of the cows had blood dripping into their eyes and both sides of their faces were soaked.

The activists returned to the paddock the following day to obtain video footage but found that the cows had been moved. Instead they found a mother cow who had recently given birth to what appeared to be a happy and healthy calf who was drinking from her. It was not until a few minutes had passed that the activists noticed another seemingly abandoned calf in the paddock. His mother had not cleaned him off nor got him to his feet. He was covering in mucous and trying to get up but with no luck. With his mother down the other end of the paddock with her other calf she seemed to have no interest in this boy. Sensing that the little calf was very unlikely to survive and knowing that even if he did he would soon be sent to slaughter the little calf was bundled up into a blanket and onto the back seat of the car.

The little calf, who turns out to be a male Murray Grey, was whisked off to a vegetarian landowner who had him wrapped up in blankets and hot water bottles. He was given some homemade colostrum and thankfully made it through the night.. Colostrum is necessary for calf health, growth and protection from disease. The newborn calf is particularly vulnerable to disease - in particular, pneumonia and diarrhoea (scour). The colostrum contains extra nutrients and antibodies to help protect the calf at this time.

A few weeks on this little guy is doing well and has made good friends with the three dogs that he lives with. He sleeps inside and has a little coat to keep him warm during the winter weather. In recent days he has been put on to a nursing cow and is starting to put on weight. He will likely always be a little smaller and weaker than other bulls because his mother did not give him her colostrum as soon as he was born but things look promising for him. He will live out the many years ahead of him as a much loved member of his new family. Sadly his little bother, who was left on the farm, will have already been sent to slaughter, butchered, plastic wrapped and cooked for someone’s dinner.

Milk is not intended for human consumption any more than human breast milk is intended for cows. Milk is intended for a cows calf and she will not produce milk unless she has been pregnant and given birth, much like human womyn. The dairy industry therefore needs cows to give birth from time to time to keep the milk, and thus the profits, flowing. The calves are the unwanted by-product of pregnancy’s on a dairy farm. Within 2 days of giving birth, the calves are taken from the cow and either sent to slaughter, sold or a small number of females are kept as replacement dairy cows. In New Zealand there are approximately one and a half million calves slaughtered yearly in abattoirs, this does not include calves killed on farms 'homekill' or calves aborted and killed on the farm. Can you imagine taking a crying baby from it's mother at 2 days old, at 4 days old herding it scared and unsteadily onto a truck, sending it to be stunned and have its throat cut? This is the reality of dairy farming in New Zealand, both on organic and non-organic farms. The bobby calf meat industry relies on the dairy industry to supply it with calves for slaughter. Without dairy cows giving birth every year, there would be few calves to kill.

The restaurant 'La Feria' 25 rue Montgallet Paris XIIè. This restaurant serves to his customers animal corpses and supports the bullfight. In the restaurant there are bullfight posters and toreros pictures and... the top: a trophy of a bull's head. Locks of entrance doors glued, windows, walls and pavement of the store were painted. We threw permanent black paint on the walls, windows and doors. We threw 2 big stones that left impacts on the windows. A good idea easy to manage and pretty safe, you must buy a pot of paint, put it into a little plastic bottle and throw the liquid at the highest of the murderers windows.

ALF keeps its promises. ALF will be back and will hit stronger. ALF is alive in France!"

"Following the recent sentencing and imprisonment of fighters for animal liberation (Eric McDavid, Rod Coronado and the unjust arrest of Sean Kirtley), activists united in the Frente de Liberación Animal (FLA) of Mexico could not remain unarmed and without demonstrating our total rejection of the system of 'security' of the major world powers (in this case England and the United States) who are accomplices in murderous speciesism, both executioners and true genocidal murderers of our mother earth and our animal brothers and sisters.

That is why the FLA has carried out a direct action against the dirty fur business in Mexico State. In the evening of May 19, red paint was spilled on the doors of such a business, its walls, curtains and windows were redecorated as well with paint-filled bulbs, thus demonstrating our small and sincere yet at the same time strong support to our fellow prisoners, to those who not only have dreamed of animal liberation but have carried it out, to those who risked their lives to liberate and to avenge the lives of others, to those who left fear behind and decided to take to the street and not to join those vegans who only avoid consuming animal products and do not see the real struggle moving forward from there.

As a cell of the FLA we are enraged to know that the capitalist system burdens us by creating aberrant behaviors and sicknesses (like speciesism, machismo and racism) which surround all those who want it to change, it hurts us but we push forward in the struggle for animal liberation when we hear that another compañero is in the dungeons of the bourgeoisie, from Mexico we send a warm embrace of solidarity and our most sincere support for these three who are condemned. Forward! Not one step back!

They may be able to censor our words and our deeds, but never our ideas!

The day will come when the cages will be opened and finally they will see a new freedom.

Give up on this struggle-- NEVER!"

80 HENS AND ONE ROOSTER LIBERATED (Sweden)

"On May 19th activists from the Djurens Befrielsefront made a visit to Åkersdals Jordbruks battery hen farm in Bara. On the farm thousands of hens are kept in bad conditions. Feathers, faeces and dirt covered everything inside the building including the cages and the animals kept in them. The first thing the activists saw was two chickens squeezed to death between the cages.
- They had fallen out and just left to die there trapped under the conveyor belt. The owners had presumably not been at the farm house in a long time since everything was run automatically, says one of the activists.
The animals were in poor condition and very stressed. They had during their lives in the tiny cages developed stereotypical behaviour and picked each other severely. Tonight 81 hens were liberated, one who turned out to be a rooster. Usualy the rooster chickens are sorted out after they have been hatched and killed as they are of no value in the egg industry.
- These birds will never again see the insides of a cage, and will live out their lives in new homes where they will be treated with love and respect. To let the owners know that we had been there we sprayed 'House of animal abuse' on the outside of the building, easy to spot from the nearby road."