The 11th June Sheffield Guantánamo protest highlighted the case of Binyam Mohamed who, after years of torture is facing the threat of the death penalty. On 31 May over 100 people attended a public meeting concerning his plight and Reprieve organised a protest in Trafalgar Square which took place on Sunday 15th June to highlight the suffering of Binyam Mohamed. The London Guantánamo Campaign are asking for urgent action to be taken for Binyam Mohamed. 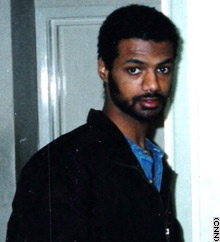 Binyam Mohamed a refugee from Ethiopia, who was granted indefinite leave to remain in the UK, was seized in Pakistan and rendered to Morocco where he was held for 18 months and subjected to horrendous torture, which, included, but was not limited to having his penis cut with a razor on a regular basis. After Morocco, Binyam was transferred to Afghanistan, where he endured further torture at the CIA run “Dark Prison”, from there he was moved to Bagram airbase and then finally put on a plane to Guantánamo in September 2004, two and a half years after his ordeal began.

Last December it was reported that Binyam Mohamed was close to suicide and in May he wrote to Gordon Brown and pointed out that "my Moroccan torturers were using information supplied by British intelligence" and he also sued the British government for refusing to provide evidence that may assist in his defence at Guantánamo. This month Reprieve, issued a detailed and devastating report, Human Cargo: Binyam Mohamed and the Rendition Frequent Flier Programme (PDF), which presents compelling evidence of his rendition and torture. Last week the Pentagon officially filed charges against Binyam Mohamed, who will face a trial by Military Commission for “conspiracy” and “providing material support for terrorism”, and a UK court approved his request for judicial review, requiring the British government to reveal whatever evidence it holds regarding the British security services’ knowledge of his rendition from Pakistan to Morocco for torture, and details of whatever information was also provided to his Moroccan torturers about his life in Britain.