Human rights activists shut down the Carmel-Agrexco depot in Hayes, Middlesex, for 12 hours on 28 September, 2008, as part of a week of action called by the Boycott Israeli Goods campaign. Both gates to the depot were blocked, with four protesters locking themselves inside a cage blocking one gate, while another was D-locked to the other. At least 14 trucks were prevented from entering the premises during the day. One protester was arrested for 'obstruction of the highway'.

The day before, at about 3:30am, activists with tipper trucks had dumped builders rubble across both gates of the depot. Protests against the sale of Israeli produce from occupied Palestinian land also took place outside supermarkets around the country, which account for 60% of Carmel-Agrexco's total exports.

Further reading: Text of letter to Carmel-Agrexco | Report on Carmel's involvement in the Jordan Valley | War on Want's report: Profiting from the Occupation 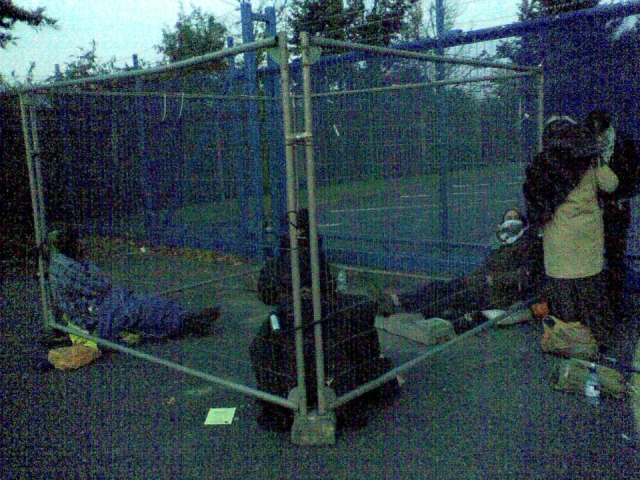 the blockade this morning

The Israeli government has a 50% stake in Agrexco Agricultural Export Company Ltd, whose exports include flowers, avocados and herbs grown in illegal Israeli settlements on occupied Palestinian land. Earlier this month, an Israeli ministerial committee decided that the company will be privatised.

Carmel-Agrexco, Agrexco's biggest fresh agricultural produce brand, had disclosed that the company exports fresh produce from several illegal Israeli settlements in the Jordan Valley in the West Bank, Palestine. The Mehola settlement in the central Jordan Valley is one of them.

Protesters argue that Agrexco's harvesting and sale of goods from illegal settlements built in the Palestinian Occupied Territories have only been enabled by eviction, murder and theft of resources, which are considered "war crimes" under the International Criminal Courts Act 2001. As such, Agrexco's business of importing fresh produce into the UK is "unlawful business".

At least three Agrexco trucks have been prevented from entering the depot and are all parked outside. Two are big trucks, one from Amsterdam and the other from France, while the third is a small local truck.

Police have come round and said if protesters did not leave soon they will have to use "reasonable force" to remove them. The atmosphere is cheerful and relaxed as the sun has come up and it's a bit warmer now.

Protestors inside the cage have managed to switch around with support team outside. The blockade will continue!

Police have been talking loudly of cutting protestors D-locks but so far no serious action has taken place in this vein. The activists have challenged the legality of cutting off protestors who the police have stated "are committing no crime".

Carmel is at Swallowfield way, Hayes, near Heathrow airport. Pay them a visit.

The activists have decided to end the callout for solidarity.
One man has been unlawfully arrested for "obstruction" despite moving when asked.

will post more updates when there is more news

17:30 : The blockade ended after 12 hours. At least 14 trucks were prevented from entering Carmel Agrexco's premises during the day. One arrest for 'obstruction of the highway'.