On Tuesday 25th November, the British state began its rollout of biometric ID cards by imposing them first on migrants. From this date foreign spouses and nationals from outside Fortress Europe who apply for, or renew, study visas will be required to attend a UK Border Agency Centre for interrogation and fingerprinting. They will then be issued with cards which will hold their name, photograph, nationality and immigration status, along with a biometric chip that will hold their finderprints and digital image. The details will be held indefintely on the UK Identity Service database. Over the next three years, other groups of non-EU nationals will be forced to undergo the process.

On Monday evening, NO2ID activists in Leeds expressed their resistance to the scheme with a public burning of a mock ID card. A Liverpool action followed on Tuesday, with a picket, leafletting and a samba band. A No Borders banner drop on one of Newcastle's busiest inner motorways on Tuesday morning alerted commuters to the rollout, whilst Lunar house in Croydon was picketed by No Borders London. Meanwhile in Birmingham a picket of the UK Border Agency in Solihull was met by a disproportionate police presence and in Cardiff there was a picket of over 60 people. Noborders Manchester joined forces with Merseyside activists to protest outside Reliance House in Liverpool. 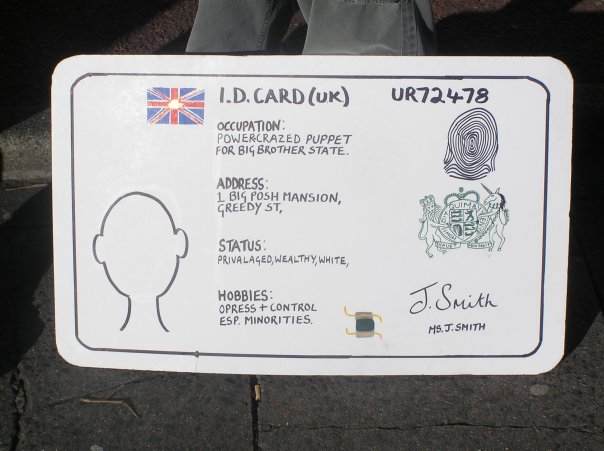 Further details of the scheme emerged over the course of the week, including the fact that ID cards will cost £30 initially and that the cost is expected to rise after 2010. It also became apparent that cardholders would face £1000 fines if they failed to update the state on out of date data.

NO2ID claimed that the introduction of hostile visa regulations for foreign nationals in the USA led to a 15% reduction in applications, and noted that British universtities would suffer if fee income from overseas students dropped. On Indymedia concerns were expressed about NO2ID's affiliates and rhetoric.

As the cards began their rollout in the UK, reports emerged that USA border guards are now able to read ID cards remotely, with the aid of the integral biometric chips. The cards and associated databases could easily be misused to oppress and control some or all of us, and it is that potential which fuels the resistance which manifest itself this week.As No Borders noted: "Under a cloud of anti-immigration hysteria the government is increasing it’s social control and attempting to usher in unprecedented powers of surveillance over the whole population."

There's a report from the Cardiff demo, including a video here:

The Cardiff office of the UK Border Agency doesn't start registering people until Wednesday 10th December, so we'll be having another demo at noon that day. Come along if you can.

Article with compiled reports of anti-ID actions and political commentary

Countrywide protests in opposition to ID cards - By resisting the repression of migrants, we defend the freedom of everyone!

one of No Borders Nottingham