Two environmentalists, arrested following a blockade of E.On's Nottingham offices, had the case against them dismissed on Wednesday. The case collapsed after it emerged that the prosecution had offered no evidence to support the charge of aggravated trespass. The Crown Prosecution Service (CPS) were found to have been negligent in their administration of the case and were ordered to pay the defence's costs.

The two joined around 30 protesters from Eastside Climate Action in an action against the energy giant, as part of a 'Fossil Fools' protest on 1st April, 2008. They locked themselves to the doors of the offices. The police made a verbal promise to allow them to leave without charges if they agreed to removed the blockade by 10am. They unlocked and were immediately arrested.

In a statement on the day of the action, Eastside Climate Action said: "We are here to tell E-on that ... the only real solution to climate change is to keep fossil fuels in the ground. Coal is the dirtiest Fossil Fool and to build new coal power stations in the face of climate change is collective suicide." 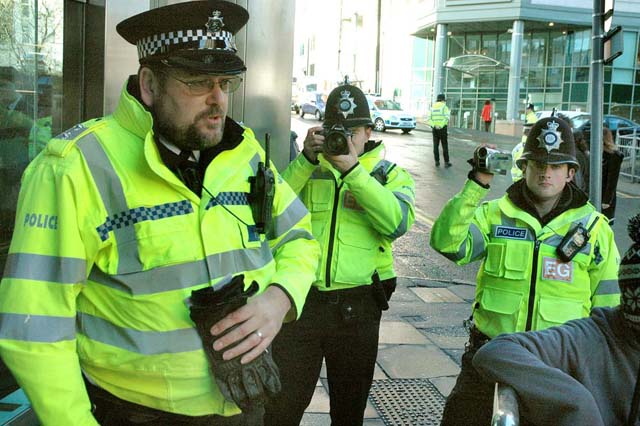 The E.On offices have since been targetted by Nottingham students as part of the '48 hours against E.On.

Tash reported from the courtroom:
Today, Wednesday 14 January 2009, in Nottingham Magistrates Court, the Crown Prosecution Service offered no evidence in the trial of George Walker and Katy Fowler. Magistrates thus dismissed the charges.

On Tuesday 1st April 2008 in the morning, 30 people blockaded the entrances to E-on's offices on Mount St, Nottingham City Centre. People were covered in green paint to represent E-on's greenwash, a couple locked-on to the front entrance to E-on's office while others stood in front of other entrances preventing E-on workers from getting to work. The climate activists were from Eastside Climate Action and blockaded E-on workers as part of International Fossil Fools Day.

At 09.56am, two were then arrested for aggravated trespass : contrary to Section 69 of the Criminal Justice and Public Order Act 1994.

Earlier, in a statement on the day, they said: “We are here today because despite E-on publicly claiming green credentials, it is trying to build a new generation of coal fired power stations. It is trying to build the first new coal fired power station in the UK in 50 years, at Kingsnorth in Kent, and wishes to continue its expansion with a new power station at High Marnham in Nottinghamshire. We are here to tell E-on that they will not succeed and the only real solution to climate change is to keep fossil fuels in the ground. Coal is the dirtiest Fossil Fool and to build new coal power stations in the face of climate change is collective suicide.”

The Fossil Fools Day, had been called by the international Rising Tide network and its allies, and saw over one hundred actions take place around the world. Protests had focused on the companies responsible for runaway carbon dioxide emissions, as well as complicit governments and those promoting false solutions.

So, with this background, people met bright and early on April Fools day. Arriving at the Mount Street offices, some went to the doors at the back of the building, while others, 'locked-on' to the front doors. The action meant that staff arriving for work, couldn't get access to the building. A few became agitated, but most gathered on the other side of the street watching in mild amusement, and enjoying their time off work. The security initially present, blew a gasket.

After about 30mins, police arrived and monitored the situation. Shortly after, officers from the now famous, Forward Intelligence Team, of the Metropolitan Police, arrived and started to photograph all present. George and Katie were locked-on to the front doors for a couple of hours. A team from Leicestershire Police had been requested who were experience in using equipment in removing people under these circumstances. Their vehicle parked round the corner, ready for action.

At about 9.15am Inspector Will Chell of Nottinghamshire Police arrived at the entrance and read a CJA warning. That he "believed that peoples action were intimidating and disrupt an person engaged in a lawful activity. That if people did not leave this land immediately, in this case 10.00am, you will be arrested for failing to leave the land on which you are trespassing, this being contrary to Section 69 of the Criminal Justice and Public Order Act 1994".

Folks believed that implicit in that statement was that if you all go away by 10am, no one would be arrested. I understand that there was never an intention to remain there all day. People feeling that they had made their point, started to fold up banners and generally tidy up. At about 9.56am, George and Katy were unlocked and then promptly arrested for aggravated trespass, and taken away in chains. On arrival at Bridewell police station, the charge was substituted to Section 5 of the Public Order Act 1986. This is about causing alarm and distress! This was a peaceful demonstration, and you will never meet two people less alarming or distressing!!

They were bailed to appear to magistrates on 2nd May 2008, where both pleaded not guilty. A trial date was then set for September, This date had to be vacated because Katy would be having a baby at about this time. [Welcome Maisy Grace :-)]

At sometime more recently, the charge then got substituted for a third time to "disorderly behaviour".

Now after all this, police and witnesses X6 turned up today, all ready for a two day trial. But, there was an initially delay, while Miss Hodgekins, contracted by the Crown Prosecution Service, went to view the police DVD of video material from their evidence gatherers. Amazingly, this had not previously been entered in evidence, and was news to her. It appeared that this showed the same sequence of events as the photographs and audio recording the defence had submitted. Thus, when she returned to court, she said that in the interests of justice, they would offer no evidence. It was not in the public interest to proceed. The magistrates thus formally dismissed the case. The witnesses were all called together and the court apologised to them for the waste of time. Both defendants were thus free to go.

Splendid news!! But this course of action, could have been possible any time since last April.

Mr Kevin Tomlinson for the defence then asked the bench to consider if the CPS had been negligent in administering the case. The DVD of the evidence gatherers work had been with the CPS all that time. None of the facts of the case had changed, and thus why were the defendants and witness put through the stress of waiting for today court date? Before ruling on this, the bench suddenly twigged that the case was actually about E-on power. It then transpired that the chairman of the bench received a pension from the company and thus had to disqualify themselves from the hearing. We all adjourned for lunch.

On returning, a new bench of magistrates had been found. Mr Tomlinson then had to summary outline all that had been said during the mornings hearing again. Miss Hodgekins outlined some of the significant volume of correspondence between the CPS and the police. The police had offered a bindover, which was declined. The CPS sent a number of notes to the police, advising discontinuing the case because the facts didn't support continuing with the case. The police wanted to proceed. Volume of paper seemed to still be increasing and again the case was reviewed by a senior lawyer at the CPS in September, again suggesting discontinuance. It appeared although there was much 'reviewing' going on, as late as 23 September, CPS say they were still waiting on replies from the police.

You would have thought that it was the CPS's responsibility in directing the case. It's what they're for, they are the ultimate authority on if a case should proceed.

The bench were thus asked to consider if the Crown Prosecution Service had been "negligent, involved in unreasonable behaviour or if the crown had engaged in improper conduct". The bench retired.

While we we're waiting, there was then some legal discussion if an order should be placed on me in not reporting the proceeding that might, it appears, be embarrassing to the CPS, possibly using Section 4 of the Contempt of Court Act. In general principle, a report can be written about anything that is said in open court. Advice was taken but in the end, no order was asked for!

The bench returned and did in fact find the CPS negligent in their administration of the case. The CPS directed to pay defence costs of £625 + VAT and the defendants tram fare of £7.50

In regard to police promises and integrity.

Now, there are plenty of people out there that will have said, "Well, I could have told you that!!"

Other forces like the MET have been famous for their lack of morality in dealing with protest and actions over years. Here in Nottinghamshire, when dealing with police, during negotiations, officers will frequently be heard to distinguish themselves and very separate from other forces. We are the nice ones!

The facts of this case are obvious.

Activist lock on to entrance doors of a building. The object of locking on, obviously to prevent their removal without a great deal of trouble. It is an uncomfortable procedure and takes some commitment.

The two people and their supporters were read a notice from Section 69 of the Criminal Justice and Public Order Act 1994 by Inspector Will Chell:

"....... That if people did not leave this land immediately, in this case 10.00am, you will be arrested for failing to leave the land on which you are trespassing."

People having been there a while, and feeling that they had made their point, pack and tidied up. George and Katy were unlocked at 9.56 and were promptly arrested at 9.57am. It is of course, probable that Inspector Chell received other orders from his superiors after making his initial notice.

OBVIOUSLY they would not have been unlocked if they knew this was to happen. They might just as well have remained there, caused hours more disruption while they were cut free, and then got arrested. Their arrest was contrary to the notice given.

The police have taken a major step back in relations by this action. In any future action, and I guess there will be many people involved in direct action will know about this case, the value of police promises and will continue to act accordingly.