A damaging report into the 'culture and leadership' at Nottingham City Council has so far been kept hidden in a locked cabinet at the Council House. Classed as 'confidential', the city council has systematically tried every effort to keep the report out of the public domain. In February, Stephanie Pearson, the information governance officer of Nottingham City Council, refused to provide the information requested by a councilor and the Evening Post under the Freedom of Information Act. The Council argue that the information disclosed in the report is 'not in the public interest'. It is also claimed that those seeking exposure of the controversial documents have not demonstrated a 'need to know' of its contents.

We believe that it is not for the City Council to judge whether information concerning their activity is in the public interest or not. Council officers should remember that they are in their positions to serve the people of Nottingham. To ensure full transparency of the activities of our City Council and in the interest of accountability we have decided to publish a direct download link of the full report. 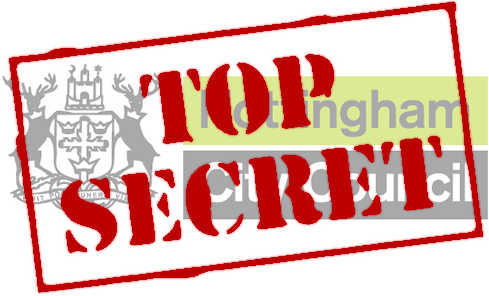 The document, which was commissioned by the former deputy chief executive Adrienne Roberts in June 2006 and written by Hardmoor Associates cost tax payers almost £30,000. The report which is highly damaging for the already weakened Council management, was after having been read by Adrienne Roberts and head of the Council Jon Collins, never publicized.

Both the Evening Post and Liberal Democrat councilor Tony Sutton filed requests for the document to be released under the Freedom of Information Act. Stephanie Pearson, the information governance officer of Nottingham City Council, refused to provide the information. In a response she argued that the disclosure of the report is 'not in the public interest'.

On January 6th another council official wrote: "The information is highly sensitive and goes to the core of the management of the authority." In appeal the disclosure of the report was turned down again, though some details, including a letter concerning the commissioning of the report and legal fees, were released.

The damning report opens with the statement "Put simply, the Council is dysfunctional" (p.2) and concludes by comparing the Council to "the insides of a clock where all of the cogs are turning but are not engaging, the hands are not going round and time stands still." (p.28) It contains a number of quotes from anonymous council members and officers that reveal the lack of vision and clarity within the organisation: "We start with panic, mayhem and a lack of clarity" (p.11). One such quote produces an alternative label to the Council's own slogans: "We're busy, expensive and inefficient" (p.12).