As attacks by the national army in Sri Lanka have intensified, so do the protests around the world. After the news of thousands of civilian deaths in Sri Lanka at the weekend, which the UN has described as ‘a bloodbath’, British Tamils began a civil disobedience protest on Monday (11.05.09) in the hope that the British government might put genuine and decisive pressure on Sri Lanka to stop the atrocities it is currently committing. Five hundred began the protest at Parliament Square early in the morning. Thousands more joined them, at which point they moved onto Westminster Bridge and closed it off to traffic. Police officers were taken by surprise. The blockade lasted until mid-afternoon, at which time police resorted to physical attacks on people in an effort to clear the bridge.

More than 300,000 Tamils are currently under siege by the Sri Lankan forces. Aerial bombardments and shelling of civilians are continuing. Children and elderly are dying as a direct result of the aerial bombardment. There has been increased violence in Sri Lanka following the capture of Tamil territory. It is estimated more than 75,000 people have already died in the conflict. 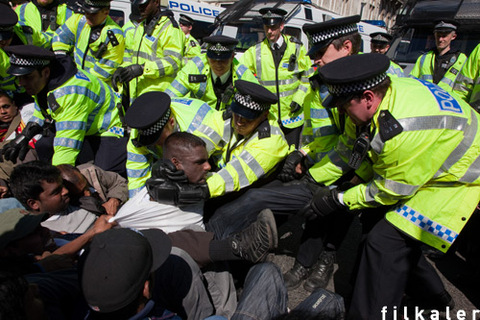 The British Tamils Forum have appealed to the British government to do all they can to stop the massacre of Tamil civilians in Sri Lanka, the fatal and final stage of the genocide of Tamils. The organisation says they have received reports from the ‘safe zone’ in Northern Sri Lanka which confirm that over 3,200 civilians have been killed and thousands more have been injured in the 'past twenty four hours alone'. (11.05.09) Rescue workers fear that the critical shortage of medicine and lack medical facilities will add to this death toll. Sources further confirm that the Sri Lankan forces continue to bombard the ‘safe zone’ with K-fir jets, multi-barrel rocket launchers, cannons and cluster bombs.

Meanwhile at the homefront Metropolitan Police continue to be criticized for their heavy handed approach in dealing with the protesters. "It wasn’t until 3 o'clock in the afternoon that the police began to seriously challenge the blockade. Women with children in pushchairs had placed themselves at the front of the crowd, in the hope that this would deter the police from attacking them. Eyewitnesses report that the police responded by taking the children out of the pushchairs by force and removing them to nearby police vans, which succeeded in forcing the parents to leave the blockade so as to reclaim their children. Women and youngsters of around ten and eleven were still at the front of the protest, and the police then began attacking them. An eyewitness reported that the police were pushing women’s breasts and striking out at children with their fists. It is said that representatives of the Tamil media outlet GTV were also targeted by the police and attacked physically." Taken from report by Daniel.