Spontaneous protests have erupted in London as a result of the ongoing state violence in Sri Lanka. On Monday, over 300 Tamil youths blockaded Westminster Bridge, which remained closed overnight. On Tuesday and Wednesday large numbers gathered outside parliament and had reached at its peak up to 3000 to call on Gordon Brown to 'open his eyes' and work towards securing an immediate ceasefire in Sri Lanka. Under the banner 'Stop the genocide of Tamils in Sri Lanka' over 150.000 people marched in Central London on Saturday 11th April. Further demonstrations happened in Oslo, Paris and Copenhagen. Reports: [1] [2] [photos 1] [photos 2] [video]

Earlier on in the week police tactics were violent, with unprovoked attacks on demonstrators. On Wednesday morning Tamil flags were being confiscated under the Terrorism act. Demonstrators reported that police used truncheons and dragged protesters across the ground. A three-year-old's leg was reportedly broken in the process. Seven people have been arrested, two under the terrorism act on suspicion of carrying articles supporting proscribed literature. Two people started a hunger strike earlier in the week, of which one was still fasting on Saturday 11th April.

More than 300,000 Tamils are currently under siege by the Sri Lankan forces. Aerial bombardments and shelling of civilians are continuing. Children and elderly are dying as a direct result of the aerial bombardment. There has been increased violence in Sri Lanka following the capture of Tamil territory. It is estimated more than 70,000 people have already died in the conflict. 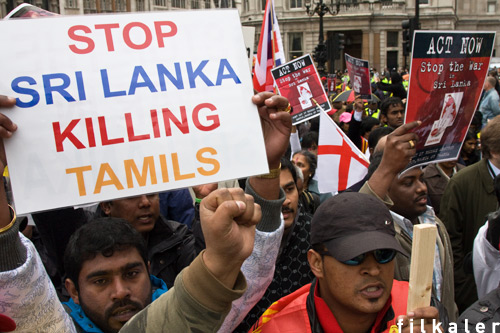 It has been a turbulent few days outside parliament with many hundreds of Tamils gathering and unwilling to move until their demands are heard. On Monday, about 300 Tamil's (many carrying Tamil flags) blockaded Westminster Bridge for many hours. The protest was loud but peaceful. TSG arrived and the protest was kettled in for a few hours in the early evening. About half of the demonstrators were youngsters on their school holidays. Although police have tried to clear the area outside parliament, Tamils have remained in place throughout Monday night, Tuesday, Tuesday night en Wednesday. On Wednesday evening the numbers had reportedly reached up to 3000. The protests were instigated by Tamil youth groups acting independently of the more established British Tamils Forum. The latter is organizing a demonstration at Embankment at 1pm on Saturday 11th April.

Two Tamil people are on hunger strike in Parliament Square 'until the last breath', with no food and no water since Tuesday.

The young Tamils are fed up with empty words by politicians and their fruitless talks with their elderly and community leaders, and want concrete action by the UK government and the international community to put pressure on the Sri Lankan government and end the genocide. The genocide is carried out under the guise of war on terrorism, to wipe out the Tamil Tiger, but up to 3000 civilians including many children have been butchered in the last 6 months and the situation is precipitating: the Sri Lankan armed forces are closing on the Vanni region, that has been sealed off so nobody can enter and no humanitarian aid is allowed. Several aid workers and journalists have been murdered.
Demands from the protesters include permanent ceasefire and access to the war zone by aid workers, journalists and human rights observers.

A boat carring humanitarian aid (sponsored by Tamil charities) is on its way:
www.vannimission.org

Amnesty International on the humanitarian catastrophe:

I haven't been able to trace any mention of 1500 people dying in a gas attack, as heard from some Tamil activists. Can any one trace news about the gas attack on websites, news agencies and the likes? Just shows how very difficult is to report in such conditions... however the media black out (until the latest protests) has no excuse!

Note to IMC-UK:
Can you update the petition link from the feature itself to the above url?
It would make more sense as the downing street petition might be slow to bring a solution to the immediate issues. The DIY Mercy Ship has already understood to have pressured the government of Sri Lanka to allow 1000 mt tons of food delivered through the ICRC. The ship is now focussed taking the urgent medical supplies.

While Subramaniam Parameswaran will continue his hunger strike while Sivatharsan Sivakumar has called off his hunger strike at midnight. This was following a request by a member of parliament __on behalf of the UK government__ who visited the scene of fast [MP's name to be updated] to see that the fast was stopped by Sivatharsan so he could attend the session of the UN Human Rights Council.
It has also been announced that a three (03) member parliamentary group is to be appointed to take immediate action to solve the ethnic conflict in Sri Lanka ] __and it has been requested that the British Tamil Youth work with this group of MPs__

Following a request by the government the Tamil National hoisted on the parliament square have been lowered.
This is following all the necessary arrangements have been made to carry the flag at the huge march planned for today [Sat 11 Apr 1 pm Embankment to 4 pm Hyde Park; Organisers: BTF, www.tamilsforum.com] where a set of demands will be handed over to the UK government.
Reference:

PLEASE ATTEND THIS DEMO WITH RESPECT FOR THE TAMIL STRUGGLE THAT IS GOING ON FOR MORE THAN 30 YEARS AND PLEASE DO NOT BE DIVERTED.
The health officials in the Vanni region under the heaviest military thrust at present reported yesterday that 69 percent of the children are malnourished. No baby milk available for a month or so -- if available very expensive.

---
Some background (to the connections with the UK and why this conflict is not simply '5000 miles away'):
Sri Lanka was Ceylon until 1972 as it was officially known until it was forcibly made a republic disenfranchising the Tamils further. UK still maintains a lot of connections with Sri Lanka stemming from the colonial days most notably the Ceylon Army did not severe the scholarships and contacts with the Royal Military Colleges. Some of the trained in the UK 'generals' conducted the most barbaric acts during the systematic Genocide of Tamils. The current president's son famously attended the Royal Naval college during the Blair years.
The established arms trade route through the UK the flourishes though the UK government is not known to have given any arms this year.
Blair met President Mahinda Rajapakse in his private residence in 2006 with a crucial witness(only to parts of the meeting as some parts were held in total secrecy) then foreign minister of Sri Lanka, who now lives in fear of his life as many of his colleagues and supporters have been assassinated or dissapeared. The current phse of hostilities accelerated soon after this meeting.
Gotabhaya Rajapakse, a US citizen, brother of Mahinda and the much feared [by foreign aid workers and media leave alone the locals] defence secretary used to traverse the UK a lot before he changed his arms dealer focus to China in recent years. Nevertheless british industry 'leaders' like Sir Stuart Rose, who was instrumental in breaking the economic pressure imposed by the EU in the form 'no more GSP+ concessions' visited the defence secretary as a matter of routine as he was running wild setting up 'sweat shops' under an environmentally friendly banner.

http://www.theclimategroup.org/news_and_events/stuart_rose/
Sri Lanka, designated a child prostitution 'paradise' by UNICEF has become the cheap destination of choice for the non ethical end of the tourism market. notably Gary Glitter still maintains his property in Sri Lanka.
Then there is cricket. It still dominates the UK newswires more than the conflict.

Last night / this morning (around 2 AM) Simon Hughes MP (Lib Dem) was on the megaphone near the hunger strike , while most of those who were 'going strong' in continuing the demonstrations in parliament square from Monday last week were unaware of his announcements!
While praising the protestors he offered that 50 people continue the protests, probably implying a bigger number was not allowed.
Following the fencing in of the common / green as the massive demonstration of
Sat 11 Apr was underway (when most on the square were attending the demo) the communications within the crowd gathered in the heavily restricted strips of space seems limited.

Meanwhile it is reported that there has been yet another (probably the second violation of its own announcement) attack into the civilian concentration this morning (GMT +5.30) where upto 40 deaths have been reported while scores more were reported injured.
As the district health official for the only functioning hospital has recently let the world know, even minor injuries result in death due to the lack medicine. Many of those who have been taken for medical treatment in Trincomalee in many of the 'mid sea transfer into the ICRC ship' drama have also died over the past few occasions.
It is also reported that many of the Tamils who come into government control are dissapearing with the men and women being separated. This is a new disturbing development distinct from the much reported 'concentration camps' that have bvecome operational to hold Tamil people for upto 3 years.