Activists from Free Gaza.org and the International Solidarity Movement, determined to break the Israeli blockade on Gaza, gathered in Cyprus and set sail for Gaza on the ‘Spirit of Humanity’ on June 29th. The following morning, over 20 miles off the coast of Gaza, the boat was surrounded by Israeli Naval vessels who threatened to fire on the boat unless it turned around. The boat continued towards Gaza, and was then boarded by Israeli soldiers, who took control of the boat, and took all 20 passengers and the captain hostage, along with aid including building materials, medical supplies and childrens art supplies. By attacking the vessel in International Waters, and by preventing it from sailing into Gaza, Israel once again showed that it has scant regard for International Law, and confirmed that it is the de facto occupier of Gaza.

The majority of the prisoners were taken first to Ashdod, and then to Ramle Prison, accused of trying to enter Israel illegally. In fact the boat at no point entered Israeli Territorial waters, and nor did it intend to do so. Whilst in prison, the passengers were able to give a number of interviews, but the mainstream reporting of the incident has been patchy. Several of them have commented on the plight of the asylum seekers trapped in Israel’s immigration detention centres, some with no way apparent way out. The majority of the passengers have now been deported, and the charge that they attempted to enter Israel illegally has been dropped.[Interview with deportee] The boat remains in the hands of the Israelis. The Free Gaza movement is already fundraising in order to be able to undertake another journey as soon as possible.

Two activists who entered Gaza on a previous successful Free Gaza voyage, have been stranded at the Rafah Crossing since June 10th, despite having permission to exit from the Egyptian Ministry of Foreign Affairs. On the other side of the border, 100 US activists with $1m of medical supplies are trying to get in. 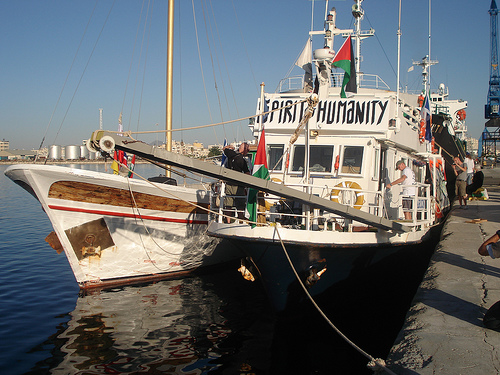 At the end of 2008, the world watched as the might of the Israeli Military Complex was unleashed on the people of Gaza. 1 300 lives were lost, many thousands were injured and housing and infrastructure was destroyed. News coverage led to massive street protests as people expressed their outrage at the brutality of the invasion.

Six months later, Gaza remains in a desperate state, it’s borders closed much of the time, and very few goods getting through to allow reconstruction to begin. Whilst the people of Gaza remain trapped in despair, the mainstream media has moved its focus away, and Gazans once again are suffering out of sight of the rest of the world.