Two weeks into Israels latest war of aggression against the people of Palestine over 800 people are dead, over 257 of which are children. Around the world there have been militant protests and this weekend saw the second UK national demonstration since the invasion took place in London. Between 50,000 and 100,000 people took part in the march which went from London's Hyde Park to the Israeli embassy. Other demonstrations and actions took place across the country over the whole weekend.

See the whole timeline of events 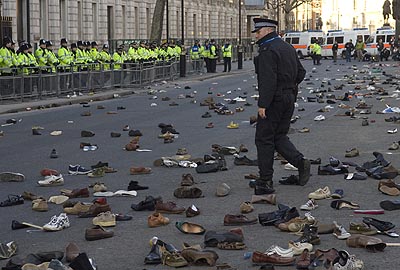 19.15 Some protestors are suffering from the effects of minus temperatures, so it was decided to provide personal information to the police. Protestors are being escorted away from the kettle by riot police in different directions, presumably to prevent the protestors regrouping later. One protestor has said it "reminds her of an Israeli checkpoint". The police horses are leaving now, but there are still hundreds of police vans lining the streets.

19.10 The police are releasing protestors from the kettle one at a time, taking their names, addresses, and photographs through a tunnel of cops. The police have announced that all 1000-2000 protestors in the kettle are suspected of criminal damage. This practice is of dubious legality and protestors are discussing whether to refuse providing personal information.

18.50 Up to 2000 people still reported kettled outside of the Israeli Embassy, a long wait is expected. There are still many people outside of the kettle too.

17.55 The protest is currently split in two halves, with thousands on Kensington High Street where there is a stand-off, and many people still in Hyde Park.

17.40 About between 1000 and 2000 people reported kettled outside of the Israeli embassy. Police on horseback were moving down Kensington Road towards Hyde Park forcing people back.

16.57 Eye-witness saw a Muslim woman with head injuries being stretchered off, and children as young as 10 years old being crushed against barricades after a panic was caused by a charge from the riot police.

16.55 Riot police on foot reported to have fanned out near the Israeli embassy and charged the crowd, forcing them over metal barriers where they were enclosed. People had no where to go and there were many injuries. Two protestors have been spotted being stretchered off in neck braces with what looks like head injuries.

16.52 The police have completely closed off Hyde Park.

16.50 Lines of police horses are now forming. Protestors are forming barricades in front of the horses, whilst a clothing shop has been covered in red paint and about six windows have been broken.

16.45 Starbucks on Kensington High Street has had it's windows smashed using a police barrier. The shop has now been trashed. Starbucks is owned by Howard Schultz who is a staunch Zionist and supporter of the occupation of Palestine. The police attempted to charge the crowd and managed to partially force their way through to the shop resulting in many injuries. Two unconscious police officers were witnessed being stretchered out of the crowds.

16.44 Outside the Israeli embassy there is a stand-off between protestors and police. Protestors have removed some of the barriers again, and a few missiles have been thrown at the police. Three of four lines of riot cops have walked out from near the Royal Garden Hotel into Kensington High Street. They are letting protestors leave but not towards the Israeli embassy. They may soon attempt to kettle the crowd.

16.25 Activists have carried out a direct action against an occupation supporting beauty products shop in London. Ahava sell Dead Sea beauty products which are produced in illegal West Bank settlements. The shop has been blockaded since 11.00am and is still closed. Three activists locked on with a triangular arm lock, whilst leaflets were handed out and locals and members of the public were engaged regarding the crimes of this enterprise. There has been widespread corporate media interest from Sky News, London Tonight, and Associated Press. The three activists have been arrested on unknown charges, and the cutting team arrived a few minutes ago.

16.10 Hyde Park is surrounded by riot police. There are a large number of police horses and riot vans in the park. This presence has made it difficult to traverse the park causing problems for people attempting to find their coaches.

16.00 LEEDS In Leeds a demo involving around 600 people marched around the city centre. There were two or three arrests for so called 'public order' offences. One police officer was threatening people with 'Section 3 of the Criminal Act' which does not exist. At one point a car pulled up with people waving an Israeli flag and taunting the demonstrators. Protestors blocked the car before police moved in.

15.55 The Israeli embassy is now closed off to the public and is lined with riot police in full riot gear and shields. There are unconfirmed reports that some protestors have attempted to access the Israeli embassy from the rear.

15.45 On Kensington High Street the police have put barriers between protestors on the road and the pavement which has caused a crush. The crowd were shouting "shame on you!" at the police who are now wearing riot gear. A man has climbed a lamp post to avoid the crush, and the police are pre-occupied with trying to get him down. Also a smoke bomb was ignited. There are many riot police situated on the side streets of Kensington High Street.

15.30 People throwing shoes and burning placards near Russian embassy, which is close to the Israeli embassy. Cops tried to intervene but had missiles thrown at them by part of the crowd. Riot police turn up later and start beating people who had nothing to do with the earlier shoe throwing, about 7 people were injured including a photographer.

15.20 Confirmed - The crowd outside the embassy pulled apart some of the barriers. They have now been put back again by police, who are now wearing their helmets.

15.10 Near Holland Street, W8, 5 riot vans spotted with another 6 rental vans around the corner. Police are putting on their riot helmets. The crowd is good natured.

13.10 People have been arriving in Hyde Park for a few hours. There have been some speeches, and there are various stalls for Palestinian liberation groups. There is an anarchist bloc with red and black flags. People are preparing to move off.

15:20 A little earlier parts of the crowd outside the embassy pulled apart some of the barriers. They have now been put back again by police, who are now wearing their helmets.

Thought you'd like to know, a BBC reporter outside the Embassy has just said that the police estimate of 12,000 is woefully low and that he'd been watching the march going past the Embassy and puts the figure in the tens of thousands, perhaps up towards 50,000.

'The Metropolitan Police says 12,000 people marched but the BBC estimates the figure could be as high as 50,000'

Demo in Leeds today, a fair estimate would be 600 people marched round the city centre, many others presumably having gone to London, two/three arrests for so called 'public order' offences. One police officer was threatening people with 'section 3 of the Criminal act', I think he had just made it up as he got angry when people asked him what this new law meant. At one point a car pulled up withh people waving an Israeli flag and taunting the demonstrators, charming.
The Police estimate there were 4 people and a cat (probaby).

in the thick of it.

Four shops in total had their windows put through, two starbucks, one v. posh optitions and for good measure a v. posh clothes shop called top gun (wall to wall fur coats) so was good day for everyone.
the police where extremely violent and willingly pushed large crouds of protesters into and over rows of upturned barrier, this is when many injuries occurd. at least four police helmets, 3 riot shields and some other filth apparel was conviscated by the protesters who used it to defend themselves against the pressing riot cops. fireworks where thrown at police and the bastards in uniform where made to dance as they went off. just an onlooker myself, but one with alot of hatred for the police and respect for the actions of the day. as long as people remember to be selective when choosing targets and protect each others backs may the fun continue.

The children getting crushed next to me were younger than 10. People were shouting "Stop" and trying to tell the police that young kids were being crushed, but it seems that with their riot helmets on they didn't hear. If anyone saw the kids getting crushed and wass reminded of the much worse things happening to kids in Gaza (50% of the population of Gaza being kids or teenagers) it wouldn't surprise me if they lost their temper.

There must have been loads of injuries as things were getting quite intense, but it was difficult to see what was going on in different parts of the protest. I was down some of the side streets acting as a medic some of the time, reluctant to get kettled. Unfortunately, the mass of people down these streets were baton charged many times, and chased by mounted coppers. I had to treat a couple of people with head wounds; one woman appeared to be having a fit (and was taken off by police medics); and I saw two young women being carried away from the chaos looking very distressed - their friends say they'd been trampled on by police horses.

Meanwhile, I know of a number of riot vans which got partially trashed - tyres were slashed, sidemirrors ripped off. Barriers for our protest pens where dragged apart and used to create barricades and loads of stuff was lobbed at the cops in retaliation.
It was incredible to see that people were angry enough to fight back after being clobbered, and wonderful to listen to 'Free Palestine!' and anti-filth slogans echoing down the side streets...