An estimated 1,500 English Defence League (EDL) supporters gathered in the pubs of Stoke-on-Trent on Saturday. Their stated aim was to rally against Islamic extremism, although the crowd heckled the EDL's own non-white speakers, fought with police and rampaged through a predominantly Asian area samshing windows and damaging cars. There was also a fight between rival football firms in the Wetherspoon's pub in which the EDL had gathered.

Once again, racist chants and Nazi salutes were witnessed indicating the presence of a significant contingent of racists and fascists. The EDL were opposed by a rally of around 300 anti-fascists, including some from Nottingham, on the other side of the city centre. Seventeen EDL were arrested and they injured four police officers.

Many supporters were disappointed by the behaviour of the EDL. One forum poster wrote "Stoke today was a disaster. We rioted. We throw bottles. We attacked police. Some people were racist." The EDL's next rally in England will be in Dudley on 4th April.

Newswire: The Anarchist / Indymedia reaction to the EDL is not working | EDL Riot In Stoke by ‘Malatesta’ | EDL Stoke | Hardcore Nazis of the EDL | The EDL In Stoke | “F*** the p***s” – meet the EDL’s anti-racist poster boy | Stop the EDL in Stoke - 23rd January 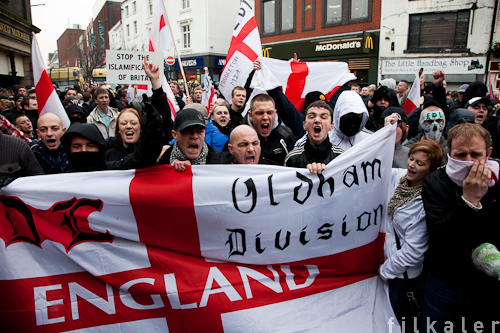 In the run up to the Stoke rally, the EDL announced that there would be two speakers, one local Sikh EDL member and one black member, in a bid to show that they were not a racist organisation. However, further investigation of Sikh member, Amit Singh, revealed that he had posted multiple, virulently anti-Muslim jokes and statements on his Facebook page, including "fuck the p***s… i just think we shud burn the cunts now!!", "ive just come off the road and hit a muslim!! It took me 10 minutes, 2 fields and a golf course, but I got the fucker!!" and "ure all a bunch of pedos, piss off back to pakistan!!".

According to one member of the EDL forum, these non-white EDL speakers were not respected, anyway, and s/he lamented the lack of discipline within the organisation: "Speeches not being respected. People not shutting up during a 1 minute silence. The occasional Nazi salute."

Whilst the EDL have hardly shown themselves to be an inclusive and non-racist organisation, the anti-fascist response to them has been criticised for its ineffectiveness by some commentators. According to 'Malatesta' "Having the cops protecting anti-fascists gathered in such small numbers is not good." Durruti02 claimed that "the analysis [that the EDL are simply fascists] is incorrect and the tactics are not working."

The EDL and SDL will now building for upcoming demos in Edinburgh on 20th Feb and Dudley on 4th April.