The English Defence League (EDL) are a small fascist organisation which has been demonstrating against "Islamic extremism" in towns across the UK in recent months. Anti-fascist organisations say the group is anti-Muslim and fascist.

On Saturday 300-400 EDL members descended on Nottingham where most were held in a police pen near the castle all day. Their presence was opposed by a number of organisations including Nottinghamshire Stop the BNP and Unite Against Fascism (UAF) who rallied in Market Square and then marched down Friar Lane. A large number of autonomous anti-fascists and local youths managed to avoid being kettled by the police.

The EDL demonstration repeatedly attacked police lines on Castle Boulevard but failed to escape their escorts. Fighting also broke out several times outside pubs in which EDL members were drinking, and photographs have been published showing EDL demonstrators urinating against the walls of Nottingham Castle.

On the newswire: Running Rings Round the EDL | Piss-Poor EDL Defending England's Heritage | Saturday and the EDL: Whose Streets? Our Streets! | The EDL & The Far Right | EDL Violence In Nottingham | Can Police or BBC Count? | EDL: soldiers of the state? | EDL Nottingham - Photos | report from anarchists in nottingham who fought fash today.... | Wetherspoons (and the Police) Allow Drunken Nazis Onto Roof | Confronting the EDL - our historic duty! | Weatherspoons warned not to host EDL | Why do the police accept the EDL/CU line? | Weatherspoons Advised dont hold EDL demo in Notts! | We WILL be in Market Square! | Police tell UAF to change anti EDL demo | Saturday's Events and The Stop the War Coalition | Join us and stop the EDL in Nottingham, Sat 5th Dec | Nottingham Stop the EDL march: Useful info and tactics | EDL in Nottingham: Information for Action 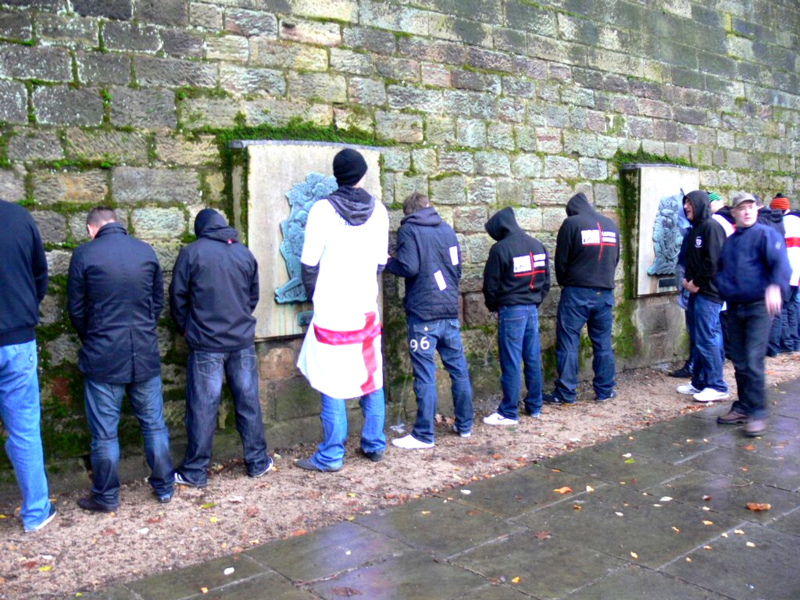 Unsurprisingly, the police drafted in officers from surrounding counties and spent an estimated £1m on policing the day's events. Roads were closed and trams into town did not go beyond the Royal Centre, while the statue of Robin Hood was boarded up for protection.

The EDL emerged in the aftermath of protests against British troops held by Islamic groups in Luton. They continue to claim that they are neither racist nor fascist. Seig heiling supporters at EDL demos and death threats to journalists who report their protests critically, tell a different story.

Anti-fascists are claiming the day as a victory saying that "the EDL were hassled and flanked everywhere they went."

I think the bottom of second para should read autonomous antifascists NOT autonomous fascists (but an amusing oxymoron anyway!)
Good feature otherwise

Is there any way of protesting against Islamic Extremitism without incurring the wrath of the left?

Good question. I would like to know as the implications increasingly seem to be that it's something that should be left alone, who knows why. There needs to be an alternative to oppose both the EDL and ANY religious fundamentalists, whichever brand they might be.

Reaction is cattle feed to these EDL bovine!

Leave them alone and it wont be long till they drag their divisions before them!

"Is there any way of protesting against Islamic Extremitism without incurring the wrath of the left?"

Demonstrate against all religious extremism regardless, don't make Seig Heil salutes, don't attack anyone who doesn't have a darker skin than yours. Don't chant racist songs.
Do work with moderate Muslim communities, do drop the nationalist bullshit.

Easy when you've got more than a few braincells knocking about.


I Hate The Fash

When I first heard about the EDF, all I heard was they were protesting. Not illegal.

I went online, and decided to look at their website. Just like I did to see for myself whether the BNP seemed to be racist (the BNP showed themselves to be racist).

On the EDF website, there was an apparently unedited video (all one long shot), showing the EDF doing nothing more than protesting against Muslims extremists - people who want to cause carnage.

I e-mailed the UAF (United Against Fascism), which I was a member of, to ask for counter-evidence showing the EDF to be racist (or against religion). No reply, so I e-mailed again. They removed me from their list in response (the removal e-mail said that it could be because I hadn't been receiving e-mails, but I'd been receiving plenty of UAF e-mails, so their removing me was obviously in response to my asking questions). They are just as fascist as those they claim to be against, and I have STILL to see evidence of the EDF, as a whole, being racist.

There appeared to be a small undercurrent of racism in a small section of the crowd in the video that I saw, but in general the EDF protestors made it clear they were only against Muslim extremists, and were happy to accept people of any colour or religion, INCLUDING MUSLIMS into their party.

So does ANYONE have any video evidence to the contrary?

Follow all the links from these posts, and then tell us that you don't think the EDL manifests as racist, whenever it takes to the streets.

Also, is it ok to work with a pro-Palestinian group if a 'small section' of it membership are anti-semitic nazis?

We'll know how serious you are about anti-fascism after that, won't we?