A mass hunger strike by migrant women detained at Yarl's Wood immigration prison in Bedfordshire has been ongoing since 5th February, 2010. The hunger strike, which involved some 84 women at the start, was sparked by detainees demanding that "the frustration and humiliation of all foreign nationals [in detention] ends now" (see demands below).

On 8th February, a violent attempt by Serco security guards to break up the protest saw 70 women being locked in a corridor for up to 8 hours without access to food, water, toilet or medical care. Many collapsed and about 20, who climbed out of a window, were beaten up and taken into isolation cells [detainee's account]. Four of the women, singled out as 'ringleaders', were taken to Bedford police station and subsequently transferred to HMP Holloway prison in London, without being charged with any offence or brought before a judge.

A similar mass hunger strike in Yarl's Wood in June last year was met with violent assaults on detainees by Serco security guards. Again, a solidarity protest was held at the company's offices in London, where protesters sneaked a look at its 'protest response plan'. 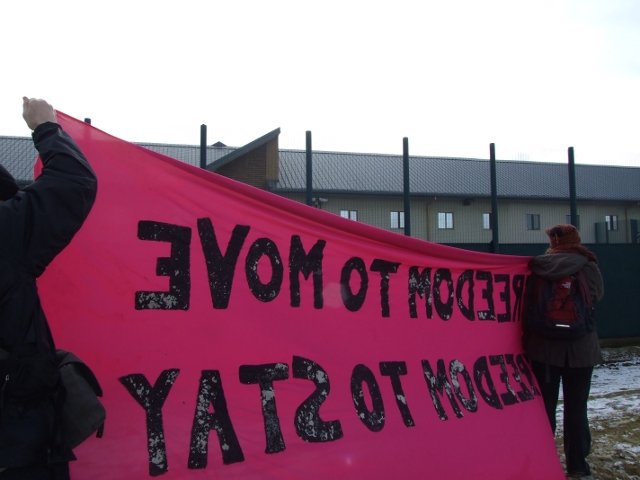 - End the frustrations, physical and mental torture at the centre.

- Allow enough time and make resources available to residents who need to fully present their cases.

- To end all false allegations and misrepresentations by the UKBA regarding detainees in order to refuse bail or temporary admissions.

- Access to appropriate medical treatment and care as in the community, access to edible and well cooked food, phones with good mobile connections, with camera and recording facilities to back up cases.

- To stop the forceful removal and degrading system of deportation of detainees.

- To put law into practise, European rules governing standard of conditions of detention for migrants and asylum seekers and the length of time in detention.

- The abolition of detention for asylum seeker and torture victims.

- Detention should be by a standard procedure prescribed by law, authorised by judicial authority and be subjected to periodic judicial reviews.

- To end the separation of children from their mothers being detained whether in detention or destitution.

- To end the detention of women detention after serving time in prison.

- To end the repeat detention of women granted temporary admission while reporting or signing after a short period out of detention.

- To a set period of time allowed to detain women, which should be no longer than 1 month, while waiting decision either from UKBA or court proceedings.

- Finally, instead of detention of foreign nationals, there are alternatives to detention stated by the Parliamentary Assembly of the Council of Europe (PACE), The detention of asylum seekers and irregular migrants in Europe, adopted on 28th January, 2010, extracts below.

9.1.1. detention of asylum seekers and irregular migrants shall be exceptional and only used after first reviewing all other alternatives and finding that there is no effective alternative;

9.3.4.5. handover of travel and other documents, release combined with appointment of a special worker.