Since the notorious Great British Circus pitched up in Nottingham last Tuesday, there have been daily demonstrations by animal rights protesters outside. The protesters are angry that the circus uses animals for the "medieval" entertainment of punters with scant regard for their welfare. The circus uses tigers, zebras, camels and horses kept in "woefully small" cages for most of their lives.

Forcing animals to perform in travelling circuses, which is condemned by the RSPCA as "very harmful", may soon become illegal. Animal circuses are already banned on most council land across the country because of the cruelty and a recent Bristol university study into circus animal welfare came to damning conclusions.

On Sunday, 30 activists came to the demonstration at the circus' current venue, the Japanese Water Gardens in Toton, and other successful demonstrations were held last week. The activists are calling for concerned people to demonstrate the circus at its next venue in Leicester, when it arrives on Tue 27th.

Update: Following news of the ban on wild animals in circuses, Nottingham Animal Rights will be celebrating with cake and champagne at the Japanese Water Gardens, 2pm on Sunday. 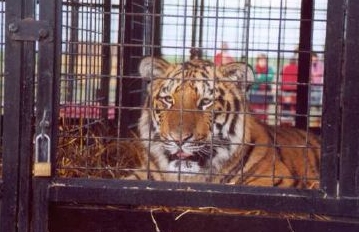 Caged tiger at the circus

In the eerie Toton twilight, Nottingham animal rights activists are currently holding daily protests against the notorious Great British Circus pitched at the Japanese Water Gardens (which already has moral black marks against it for the condition of its fish tanks and its exotic pet shop).

There were no problems with the police and the response from the public was generally positive. One customer came out appalled by the visible signs of beatings she had seen on a tiger.

Forcing animals to perform in travelling circuses which is condemned by the RSPCA as "very harmful", may soon become illegal especially after the damning conclusions of a Bristol university study into circus animal welfare which is the most respected scientific analysis of the topic to date. Animal circuses are already banned on most council land across the country because of the cruelty.

In the woefully small cages of the Great British Circus, tigers, camels, zebras and horses must spend most of their lives, the little exercise they get being "broken in" and trained to perform their unnatural repertoire for gullible punters most of whom will never see the fear and suffering they are causing by patronising such medieval forms of entertainment.

To get involved with Nottingham Animal Right's efforts to stop all animal cruelty, see:
www.veggies.org.uk/nar
www.myspace.com/nottinghamanimalrights