Don't buy the lie: Say No to nuclear energy before it's too late

Call-out
"The time to act is now. We only have this summer to build a massive public backlash against the new nuclear programme. By the Autumn, the government will have given the green light to at least ten new reactors and it will be a lot harder to fight the momentum." Kick Nuclear campaigns against the UK's addiction to nuclear energy. 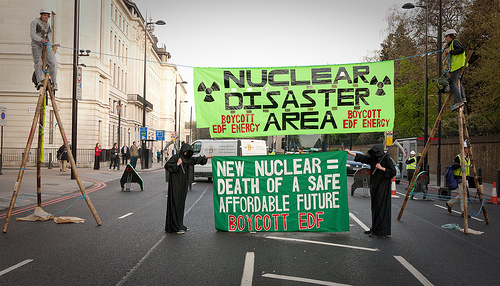 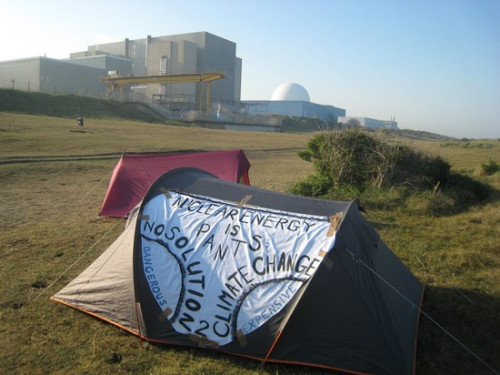 On 11 April this year, anti-nuclear activists set up a roadblock on a major central London artery outside the headquarters of EDF Energy. Using 14ft tripods and some carefully planned traffic diversions, a 200 metre section of road was sealed off and declared a ‘Nuclear disaster area’. Two activists dressed as grim reapers then walked solemnly to EDF’s front door carrying a banner with the words: Nuclear energy: the death of a safe, affordable future’. Links: Press release | Videos on YouTube: highlights | footage shot by passing cyclist.

The Grim Reapers’ statement was no exaggeration. The government has been carefully trying to con the public into thinking that building ten new nuclear reactors around the UK is the only way to stop climate change. Nothing could be further from the truth. Many organisations have produced viable proposals for a future without nuclear, including Greenpeace, which has proposed a Combined Heat and Power (CHP)-led revolution in decentralising our energy provision and creating the change in mindset that would re-democratise the process of powering the UK. Greenpeace’s research found that the CHP-led solution is both cheaper and greener than the nuclear option. Links: Summary | Full Report.

During the EDF blockade, one of the tripod-sitters was interviewed by LBC radio and asked why they had to go to the extreme of seizing up London’s traffic. The simple reply was: "We’ve written press releases, we’ve lobbied MPs, we’ve done the democracy thing but no-one is listening. This is the only way to get our message across."

The issue of future energy provision should be one of the key debates of our time but the mainsteam media is completely failing in its duty to take the politicians to task over the different options available. The inertia is tangible on the newsdesks of the national press and in the corridors of power. Time and time again, we hear the same response: "Nuclear power will keep the lights on. End of. Next issue." Nobody is asking the killer question: "But at what price?"

At the end of 2009, anti-nuclear activists from all over the country joined together to provide an alternative to this apathy. Since then, the Stop Nuclear Power Network has been actively challenging the government at every turn as it prepares the legal framework for a future that could be almost entirely powered by nuclear reactors.

Most of the activity has been focussed on EDF Energy - the company that is spearheading the push for a ‘nuclear renaissance’. EDF is gearing up to build two mega-reactors at Hinkley Point nuclear power station in Somerset and another two whoppers at Sizewell in Suffolk.

As the months go by, the wave of anti-nuclear activity is growing. Events around the country have included an ongoing legal challenge to nuclear power stations; debates such as this one in Bristol with Helen Caldicott; stalls including these in Wrexham and Chester; radio discussions: Helen Caldicott | What you don't know can kill you | Japan's nuclear crisis 1 | 2; plus a torrent of press releases including these two from Kick Nuclear: the Japan earthquake and Fukushima fuels wave of resistance, just in case someone on a newsdesk somewhere bothers to pick up on what’s going on – particularly after the horrifying events at Fukushima in Japan.

On the direct action side, as well as the EDF blockade in London, there have been blockades outside the entrances to the existing reactors at Hinkley and Sizewell, as well as a weekend-long protest camp on the beach in front of Sizewell and a demo in London to mark the 25th anniversary of Chernobyl.

The critical point is that the time to act is now. We only have this summer to build a massive public backlash against the new nuclear programme. By the Autumn, the government will have given the green light to at least ten new reactors and it will be a lot harder to fight the momentum.

The nuclear solution is, at best, like putting a contaminated sticking plaster over a gaping wound. At worst, it could lead to widescale death and destruction and poison the land forever. We need a future not a nightmare.

What you can do

Boycott EDF: if you are a customer of EDF, please make your opposition to new nuclear clear by changing energy provider and hitting EDF where it hurts most – in its profit margin. Step by step details on how to do this can be found at Boycott EDF.

Write to your MP: Boring, yes, but the more people voice their concerns, the more seriously the issue will be taken.

Support the Stop Nuclear Power Network. Find your local group and get involved.

If you are based in London, Kick Nuclear has regular meetings at King’s Cross. More details can be found at Boycott EDF.