WikiLeaks founder Julian Assange took his appeal against extradition to Sweden for alleged sexual offences to the High Court in London on 12 and 13 July. Assange has been electronically tagged and required to sign on daily at a police station for over six months since being released from Wandsworth prison in December 2010 prior to the extradition hearing which took place in February this year. The manner in which the allegations against him have been pursued has led many to conclude that the extradition is being sought neither for the benefit of the two women involved nor in the interests of protecting other women, but rather to secure Assange's extradition to Sweden with a view to onward extradition to the US where he would face the full wrath of the Empire, an Empire comprehensively exposed by WikiLeaks revelations. Assange has received many death threats from the US; there have been calls for him to face the Death Penalty over the WikiLeaks disclosures, as well as calls from prominent politicians and media personalities for him to be 'hunted down' and assassinated.

In the two weeks leading up to this appeal hearing, solidarity actions and events took place in London. Anti-war supporters of Assange and others maintained a presence outside the Royal Courts of Justice from 9am on Tuesday 12 July and throughout the two day appeal hearing. At the end of the hearing, judgment was reserved and is expected within the next few weeks.

On the newswires (re. current hearing): Report from the court Wed 13 July | Tues 12 July | Call-out for support at extradition appeal | Call-out for solidarity protest in Dublin | Assange Subterranean Homesick Blues | 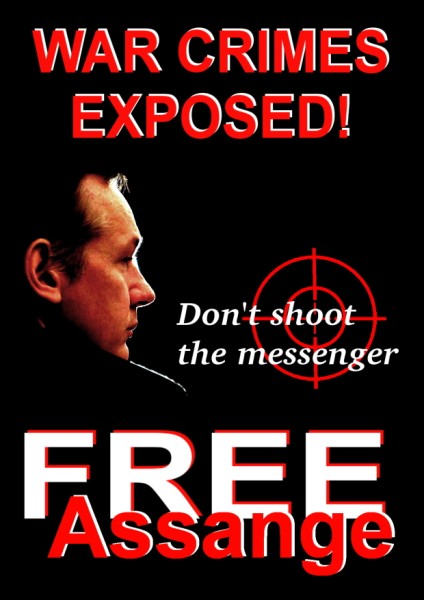 Sr. Susan Clarkson of Oxford Catholic Worker has held four vigils outside the High Court over the past two weeks, accompanied by supporters from the Catholic Worker, WISE Up for Bradley Manning and UK Friends of Bradley Manning. Leaflets and postcards were handed out and activists put up a large banner and displayed placards to alert as many passers-by as possible to the coming court hearing. A re-make and adaptation of Bob Dylan's early music video 'Subterranean Homesick Blues' is also getting the message out about the court hearing and the need for solidarity and support for Assange.

This postcard calling for support at court as well as advertising a public meeting with Peter Tatchell on 9 July has been distributed via the internet, at tube stations, outside the High Court during vigils, outside Parliament, in shops and cafes and through house-to-house leafleting. A flyer about the treatment of whistle-blowers and calling for support for Bradley Manning and Julian Assange has also been widely distributed.

The public meeting on Saturday 9 July, organised by London Catholic Worker, featured speeches from human rights campaigner Peter Tatchell, Iraq veteran and war refuser Ben Griffin and former prisoner of the US and anti-war activist Ciaron O'Reilly, with music from Joe Black and others.