The legality of the eviction notices served by Basildon Council on Dale Farm residents was challenged by the Travellers in the High Court on Friday. Once the arguments had been heard, including an application by Basildon Council for the scaffolding at the entrance to the site to be removed, the Judge Mr Justice Edwards-Stuart said that there would not be a ruling before Monday 26 September (now extended to Tuesday 4 October). Late in the day it was reported that the injunction to restrain bailiffs from starting any clearance or eviction of the site would stand in its current form until at least 4pm Monday. A later report indicated that the judge may further extend the injunction into the middle of next week or beyond if necessary. In the meantime, applications are being prepared for judicial review of the eviction, which could lead to further delay of a final decision. Basildon Council has already set aside £18 million to evict the Dale Farm residents. However, with the current stalemate reported to be costing the council over £1 million per day, the total cost is likely to have increased by some £8 million by Monday and will continue to rise during any further delay. With a bit of luck they'll run out of money before the eviction is allowed to go ahead.

Supporters are needed both at the High Court now and at Dale Farm now and for the duration. Contact savedalefarm@gmail.com for more information or see Save Dale Farm. 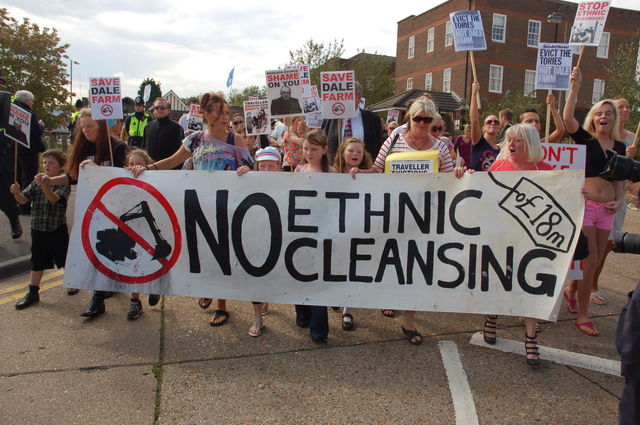 Basildon Council has also been ordered to pay one third of the costs of the case to Dale Farm residents. Mr Justice Edwards Stuart added that it is important that the dignity of all concerned is respected in the event of an eviction.

All of the fences, walls, and walkways along with certain caravans, buildings and concrete, cannot legally be removed in the eviction – either because the structures pre-date the families’ purchase of Dale Farm, or because they were not covered by the Council’s enforcement notices. This includes a number of plots which could still be used residentially.

If the Dale Farm residents’ application for a judicial review into the legality of the entire eviction fails, Basildon Council must then decide whether to spend £22 million on a partial eviction.

Mr Justice Ouseley, who is currently hearing the Dale Farm application for a judicial review in the High Court, ordered the eviction of the Hovefields Traveller site, also in Basildon, in September 2010 on the basis that it was greenbelt land. The site has since become a rubbish dump.

Cheap, peaceful solutions still remain for Basildon Council to resolve the situation. It was revealed in court last week that they have been offered free land and funding to provide alternative Traveller pitches to resettle Dale Farm residents, who have said all along they would gladly move as long as they had somewhere to go.

Dale Farm supporter, Lily Walker, said “Today’s outcome nullifies the greenbelt argument the council have been using – it is now clear that if the eviction goes ahead, Dale Farm will return to its former state as a scrapyard. We are calling on the Council to abandon an eviction which will come at great financial and human cost and instead engage the Dale Farm community in negotiations.”

Today was another intense day in court for Dale Farm residents. Upon entering the courts, one of the residents expressed how stressful the process was- how she could not sleep because of the uncertainty of whether she would have a home to go to at the end of the day.

At the court, the Judge heard evidence about whether the decision to evict Dale Farm was proportional and whether it should go ahead. This argument was based on the fact that the operation will not and cannot be a full-scale site clearance which would result in the site being restored to greenfield. Because Basildon Council botched the eviction notices in their overenthusiasm to chase Travellers out of Basildon, the operation will at most be a partial site clearance where people will be allowed to remain but fences, walls and some caravans will be able to stay. This means that the Court’s decision will essentially decide whether Basildon Council should spend £18 million on “restoring” Dale Farm to its original state- a scrapyard.

Another major focus of the court case was the fact that Basildon Council did not fulfil its responsibility to find suitable alternative sites prior to going ahead with eviction. Despite the Homes and Communities Agency offering free land (who turns free land down?!) to be developed in the Basildon area into a Traveller site, Tony Ball and Basildon Council pulled out of negotiations and decided to pursue eviction.

Today, Labour Leader Ed Miliband came out against the eviction of Dale Farm prior to finding alternative sites. This is a significant improvement over his previous unqualified support for the right of Basildon Council to evict, and although we reckon the eviction is just plain wrong, we’re glad Miliband has at least enough sense to say that alternative sites ought to be found.

Meanwhile, the anxiety felt by families at Dale Farm has been increased by Tony Ball’s refusal to commit to giving adequate advance warning in the case of an eviction. His lawyer said that if the court case had gone in favour of Basildon Council, bulldozers would have gone in right away- possibly even before news about the Court’s decision would have reached residents. Outside the court, Tony Ball refused to answer the question of whether he would give residents any warning before sending bulldozers in.

Arguments will continue in court Friday, and a ruling is not expected until Tuesday. The injunction remains in place until Tuesday under its current conditions.

Today, the High Court will be considering whether three Judicial Reviews which challenge the legality of Basildon Council’s eviction plans have merit and should proceed. If a hearing is granted, it could stop the £18 million eviction in its tracks. If the ruling goes against Dale Farm residents, they could face imminent eviction and homelessness.

Some of the arguments which will be made in the Judicial Reviews are:
* Basildon Council should have used other methods to resolve the issue including negotiating with the residents for a new site. For example, documents filed in court will show they even went so far as to refuse an offer of free land for alternative sites from the Homes and Communities Agency [1].
* The enforcement is disproportionate – neighbours of Dale Farm have been granted retrospective planning permission for homes built as illegal developments [2].
* Basildon Council disregarded the requirement to provide 62 pitches [3].
* The Council’s attempted eviction failed to consider that Dale Farm was a former scrapyard. Now, they are being forced to backtrack on many of their enforcement plans, meaning that the £18 million eviction will be partial. The Council’s disproportionate action will shatter the Dale Farm community yet fail to restore the greenbelt.

We may need you to come down Monday night if the injunction is lifted – please be ready.

On Friday in court, barristers for Dale Farm residents backed up by the Gypsy Council, did a fantastic job before the Judge. It now looks like the ground in parts of the former scrapyard cannot be dug up, so at least this part will be saved from being turned into a rubbish dump: Sky News report

At 4pm on Monday September 26, we'll receive a decision from the judge about the other arguments that were put forward, and we'll know if some other plots at Dale Farm can be saved. The judge has also indicated that he is open to a judicial review of the eviction, and we'll find out if this goes forward. If it doesn't go forward, then the eviction could happen on Tuesday morning, so please be ready to come down Monday night to Dale Farm. If there is a judicial review, then the eviction will be delayed by several more days.

We also learned a few more things: The judge said that Camp Constant and our property cannot be removed by the Bailiffs, including the two back observation towers. However, Basildon Council keeps pressuring the judge to give them powers to remove the front observation tower and scaffolding gate. Tony Ball also admitted that he was continuing to pay for the rental of heavy machinery, because their contract doesn't allow them to return it. It is believed that the bungled operation is costing £1million/day.

We don’t cost a million a day, but we do need some money. Just a fiver would help - please respond to our emergency funding appeal. Buy Dale Farm a pint!

Solidarity action - we need you! Please spread the word: organise an event to raise some money or keep attention, including media attention, on to what is going on at Dale Farm. If you are running an event, please send details to: savedalefarm@gmail.com and we will help spread the word. Also, link to the website and the facebook page and get people to sign up to the call out.

And sign the petition calling for a motion of No Confidence in Tony Balls, belligerent Head of Basildon Council.

We’ll be sending out tweets, updating the website and facebook and sending more bulletins on Monday as the court case continues, keep your ears to the ground.

Injunction preventing the eviction will continue until at least Thursday.

The current court proceedings are mainly focusing on technicalities, but they are technicalities which make the eviction much harder and more complicated for the Council than the complete site clearance they were hoping for. For example, since the current enforcement notices don't mention removal of fences, it might be decided that the Council do not have the right to remove them, which makes it much harder for them to dig up the hardstanding etc.

Meanwhile a new Judicial Review has been filed, but is still at an early stage and may simply be dismissed..

This may only be a temporary reprieve. We still need to be ready to stand alongside Dale Farm to resist any eviction attempt.

Here's a pdf of the court judgement issued on Monday 26th:

http://t.co/l2syLMe1
..which has all the intricate details of the current state of play.