More than 300 people, mostly from the south-west but with representation from across the country and as far afield as Belgium and Germany, successfully sealed off the main entrance to Hinkley Point nuclear power station in Somerset on the morning of Monday 3 October in opposition to EDF Energy's plans to build two new mega-reactors on the site. Over 200 of those taking part also spent the weekend at a temporary protest camp set at nearby Nether Stowey.

Blockaders were joined at the EDF gates by a theatrical troupe who enacted a nuclear disaster scenario, while Seize the Day provided a musical backdrop to the event. 206 helium balloons were released to represent the number of days since the Fukushima meltdown. The balloons will be tracked, to show which areas of the West Country would be worst affected by a nuclear disaster at Hinkley (and hopefully to prevent wildlife from suffering the harm which can be caused by deflated balloons).

The blockade remained in place for a total of nine hours, with participants reporting a 'great festival feel... Dancing, singing and chanting.'. There was one arrest, of a protester found in possession of a craft knife while walking along a footpath. He was later released without charge. 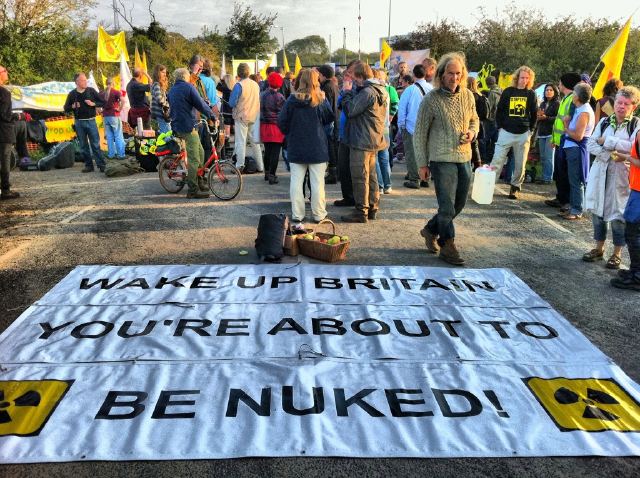 Following the blockade, Stop New Nuclear spokesperson, Andreas Speck, said "This blockade shows that people who understand the true dangers of nuclear power are prepared to use civil disobedience to get their voice heard. The government has hoodwinked the public into believing that we need nuclear power to keep the lights on. But this is totally untrue."

Angie Zelter hit out EDF’s claims that Hinkley Point is sustainable. She said: "Over its lifetime, Hinkley will consume more energy than it produces - if you take into account the energy used to extract uranium and the power needed to store radioactive waste for hundreds of years. It doesn’t add up."

Some press reports noted that the car park and toilets for the event had been provided by EDF. Members of the organising group said that they had been keen to avoid unnecessary expenditure and had asked the police to provide toilets for them as well as parking space given the narrow lanes in the area and the large number of vehicles expected. The cops had apparently dealt with this request by passing it on to EDF which had been more than happy to oblige and advertise the fact. One protester said of the toilets: "Don't worry - we pissed all over them." Only as the last person was leaving, we hope.

The blockade comes just a few weeks after an explosion at a waste processing plant in France. A French anti-nuclear camp is planned for November.

Protesters are urging ministers to look to Germany where the government has pledged to phase out nuclear power within ten years. ‘The German government has just published a blueprint for a sustainable, nuclear-free future,’ said Camilla Berens from campaign group, Kick Nuclear. The key focus is energy reduction and a bridging technology called combined heat and power (CHP). The burning question is, if Germany can do it, why can’t we?’

On 1 October, two days before the Hinkley blockade, more than 150 people converged opposite EDF Energy's regional HQ in Bridgwater before marching through the town centre. Two protesters were dressed as the grim reaper, while a choir from Wales sang songs opposing the new reactor proposed for Wylfa nuclear power station on Anglesey. At a rally in Cornhill, the crowd heard that radioactive waste from the new EPR reactors earmarked for Hinkley will be so toxic that it will have to be stored at the site for more than 100 years.

A Stop New Nuclear protest camp was set up from Friday near Nether Stowey, Somerset to accommodate blockaders in advance of Monday's action. Around 200 people spent the weekend there, taking part in workshops, hearing horror stories from Greenpeace France about nuclear developments there and forming affinity groups ready for Monday's action.

There was a brief incursion onto the site by a police surveillance vehicle after the blockade on Monday, contrary to the agreement between the camp organisers and the police. No surprises there, then.