As the Occupations go Global, Nine are Ongoing in the UK

On 15th October 2011 the Occupy Wall Street protests went global with over 1,000 protests around the planet. In the UK a number of towns and cities saw occupy actions which are ongoing. Birmingham protestors met at Victoria Square, [ 1 | 2 ] and started their on-going occupation. A small protest took place in Sheffield and Cardiff. Several thousand attended a rally in London, where despite a show of force by the Met, a General Assembly was held and tents pitched in front of St. Paul's Cathedral. In Scotland, tents were pitched in Glasgow's George Square and Edinburgh's St. Andrew's Square. Ongoing occupations also started in, Norwich, Nottingham, Newcastle and Bristol [ 1 | 2 ]. These occupations joined Manchester which had already been in Occupation since October 3rd, when a camp was started in Albert Square, which later moved to the Peace Gardens after negotiations with the council and police. Future occupations are being discussed in many other places. 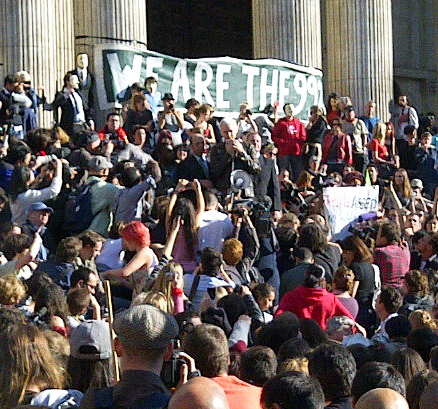 The occupy protests have attracted increasing media attention and have also seen concerted efforts to try and bring together people to unite in a struggle for a better world. They have attracted many new people who have not been involved in protests before, and having focussed initially on the failures of the banking system, and against the growing inequality in our societies, they are attempting to start addressing wider issues as their workshops and General Assemblies begin to explore new ways of working with each other, and of organising the camps and in some cases taking Direct Action. In the case of Occupy Wall Street, working groups worked to build links with unions and with communities as they seek to unite people under a banner of "We are the 99%", in the face of the growth of the wealth of the 1%.

Occupy Liverpool since the 26th November.

Twitter is an amazing tool for social organisation and marketing ideas. The only way we can achieve real change is democratically, and twitter is an amazing tool for democratic discourse and helping the movement grow. Tweet #OccypyLSX #OWS and all the rest! Solidarity to all involved. Maybe this is finally the moment where a real grassroots political dialogue will begin en masse!

Cycled past where Occupy Manchester was today, and it's all gone.

No idea what happened; it felt a bit marginal anyway. Oh well.

Try the current squat cafe - better by a long chalk -

The camp at Writer's Square, opposite St. Anne's Cathedral, has been established since 21 October

The Occupied Times of London, the independent newspaper of the Occupy London has launched its first edition. At the launch, held on the steps of St Paul’s, the first copy was handed over to the Museum of London who will frame and hold a copy in their collection.

Consisting of twelve A4 pages of comment, news and features alongside photos, cartoons and event listings, written largely by the camp’s occupants, there is an initial run of 2000 copies of its first newspaper. These are being distributed to protesters at the occupation, city workers and members of the public. The paper was founded by Steven Maclean, editor-in-chief, and has been created in just a week at the occupation in London.

Mircea Barbu, one of the editors of the paper, said; ”We hope that the Occupied Times of London reflects and records the movement, bringing together the wide range of voices of supporters as well as challenging the issues behind why we are all here. It’s the great thing about this occupation. You can come here and get involved immediately. You can even help us with the next issue which we’ve just started working on!”

After the launch, members of the team who created the paper answered questions about their motivations, the content of the first issue and what they hope to achieve through its production. There was also a debate looking at the statement “Are we anti-capitalists?”, which has been used to describe the occupation without necessarily understanding the complexities and the range of opinions that which make up the camp.

Some exclusive, pertinent videos of the Occupy London protests from the last week or so:

"Yes they gave us some sort of student paper, we threw it away as it is worthless to the museum"