Workfare: Enslave us and we'll shut you down!

Protests took place outside stores across Britain on 3rd March 2012 as campaigners stepped up their opposition to the ConDem workfare slavery scheme, (started under Labour,) by taking the online campaigns, which have resulted in many firms pulling out, onto the streets .

In Edinburgh two Tescos were 'invaded' and pickets were mounted outside a Poundland and British Heart Foundation store. The Edinburgh Coalition Against Poverty delivered a letter to the BHF store insisting “that BHF withdraws completely from the Work Programme and all workfare schemes”

Bristol cops arrested two protestors at a picket of a McDonalds, and a solidarity action was held outside Trinity Road cop-shop later in the day. In Birmingham about 50 campaigners stopped off at Sainsburies and Superdrug to congratulate them on pulling out the scheme, whilst pickets were held at Poundland and McDonalds. In Sheffield campaigners who were chucked out of a Tesco on West Street, continued their tour with visits to stores which included Marks and Spencers, McDonalds and Primark. Nottingham campaigners picketed Wilkinsons before moving on to other stores

In Lewisham, McDonalds, Boots, Greggs, BHS and Primark werre targeted by a group of about 30, whilst Oxford Street saw a few dozen campaigners target outlets including McDonalds, Pizza Hut and Holiday Inn in a game of cat and mouse awith the police. On Friday Ian Duncan-Smith was challenged by protestors as he arrived at a conference in Tottenham. He insisted that "workfare is a brilliant scheme". 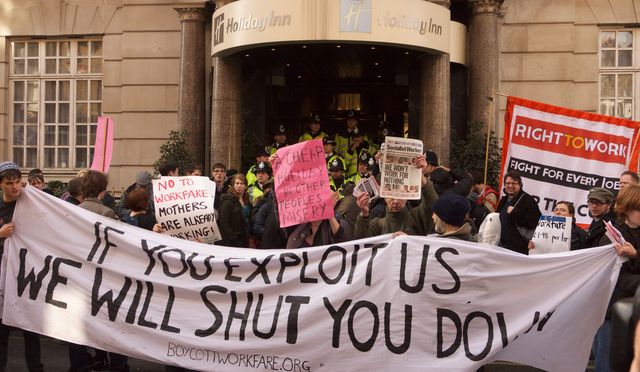 Back in 2008 when workfare was proposed under the Labour government, SWAN said that the proposed "reforms seem to be about cheap labour, reducing costs, a Victorian notion of the ‘undeserving poor’ and creating a new market off the the backs of some of the most vulnerable in the UK", and they have been proven right as corporations have jumped at the chance to to replace paid workers with the "voluntary" free labour that the unemployed are forced to undertake to retain their benefits.Compulsory work for benefits came into law on 12th November 2009, under Labour.

The Boycott Workfare campaign had it's first public protest in June 2011 when the “Making Work Pay” conference was cancelled due to pressure from campaigners. Two months later, riotact wrote, "Workfare, the government’s forced labour scheme, could be the latest policy to unravel as encouraging momentum builds against the proposed reform of the welfare system". In September 2011 Corporate Watch exposed major retailers taking part in the scheme. In November 2011 legal action against workfare was launched. In Feburary 2012 Tescos was exposed for using workfare labour.

Corporations have happily used the free labour scheme to do things like staff ASDA over Christmas, but the on-line campaigns and protests have now resulted in many companies pulling out, however there are still over 90 involved, the ones who have withdrawn are, TK Maxx, Sainsbury’s, Waterstones, Shelter, Marie Curie, 99p stores, Maplin, Oxfam, Mind and Disability Works UK group (this includes eight major charities), BHS, Burger King (although they have only mentioned one of the five workfare schemes), HMV and Boots.

What the law says

Article 4: Prohibition of slavery and forced labour
1. No one shall be held in slavery or servitude.

2. No one shall be required to perform forced or compulsory labour.

3. For the purpose of this Article the term "forced or compulsory labour" shall not include:

a) any work required to be done in the ordinary course of detention imposed according to the provisions of Article 5 of this Convention or during conditional release from such detention;

b) any service of a military character or, in case of conscientious
objectors in countries where they are recognised, service exacted instead of compulsory military service;

c) any service exacted in case of an emergency or calamity threatening the life or well-being of the community;

d) any work or service which forms part of normal civic obligations.

Here's what the Equality and Human Rights Commission says about the restrictions.

Your right to be protected against slavery and servitude is absolute. It can never be restricted.

The law relating to forced labour is also absolute. But it does not apply to work that you have to do as part of a prison sentence or a community sentence. Nor does it apply to work the government requires you to do in a state of emergency. Finally, it does not include normal civic obligations, such as maintaining a building if you are a landlord or deducting taxes from your employees’ wages if you are an employer.

So certainly bother these people with a call if you are a victim of this latest corporate-government abuse (or even if you're not ;o).

The Tories and the EHRC.

Human rights legislation came about in the wake of the abuses carried out during and leading up to WW2. Bizarrely the man that liked to put troops on the streets to quell South Wales miners, who approved of the use of chemical weapons against civilian populations and Tory, Winston Churchill, was a strong advocate of a supra national Human Rights justice system.

Clearly proposed 'blue-sky' tory policies on prison/crime/welfare reform would run foul of theses very basic human rights made concrete in the EHRC.
All the fuss about Abu Qatada and terrorist cats, is a smoke screen, an attempt by the British Government to associate Human Rights with terrorism in the mind of the tabloid reader, but the main purpose of the constant anti EHRC spin is to circumvent legal challenges to neo-liberal slavery policies like 'Work-Fare' which is in clear contravention of EHRC Article 4.

A quick search for something like "Cameron against EU human rights" brings a wealth of main stream media articles about this.

Many contain quotes from hideous tories and right wingers like this one from MP Amber Rudd.

“It has been well trailed in the press that the Prime Minister is going to share the growing dissatisfaction amongst MPs and their constituents regarding judgements by the European Court of Human Rights. It is not acceptable to have the decisions of our judges on issues such as immigration or welfare, overruled by an interpretation of a Convention that was set up to protect people against real violation of human rights, such as torture”.

This Tory arsehole thinks slavery is fine - a minor offence.

"... To hell with the 'human rights' of all these criminals, spongers and illegal immigrants and their 'right' to a 'family life' if they have fathered a child or have a 'cat', it's high time the 'human rights' of the law abiding residents of the UK were taken into account and given priority..... If the EU thinks that criminals, spondgers [sic] and illegal immigrants should have priority over their own citizens that's their choice, but in Britain the existing residents come first - whether they approve or not!"

Please get in touch - anyone doing research around the (il)legality of UK workfare - PRIMARILY, how it contravenes workers' rights to organise and collectively bargain; rather than direction of how it contravenes human rights legislation (which is not to say two don't overlap).

Prime Provider Ingeus UK Ltd received over 23% of the Work Programme money (£773,563,445) at least so we are told via the ‘Contracts’ which were actually ‘Tenders’.
CEO of Ingeus UK Ltd (Dean James) has a false identity.
How much of this is going on has yet to be discovered.
Although it may explain why the public do not get access to the Contracts, and why all the signatures and details within the Tenders have been redacted (deleted)

Where are the Work Programme contracts?

I'm wondering about any relationship with wife of ex-PM Kevin Rudd, Australia, and our Amber Rudd MP Con. She's right into all this nonsense [ex-banker, too!] Hastins East Sx UK.

Practical? Answer ? Nah the DWP would never go for it


Set up Workers Co-Operative of "Skills Providers" called Action 4 Enjoyment Co-Operative Ltd, You join your shareable skills are listed. Then share these skills with the "Workers Co-Operative" Action 4 Enjoyment workers share divis with the Workers - equitable and how its supposed to be - get the money off DWP (that's the hilarious part as if!) by hilariously bidding for million pound contracts! Protesting if they refuse for no good reason, when DWP pays Action 4 Enjoyment' to the train 'the Workers' (like as if!) the workers get paid their dividend outta the govt cash Instead of the money going to corporate tossers it goes into the community like it was supposed to when our ancestors set up these systems to try and ameliorate the boom dot bust of capitalism. So let's take em back they don't belong to the con-dems or mute newt Labur they was socialist things innit? Its a dimo cracy don't we love dim ocracy so much we have to sanction and bomb people to submission to accept it? And look at the birthplace of democracy Greece , or to France or even Bradford! er oh no its markets v democracy who'll win, well all the BIG money is with the markets but all the numbers are with democracy by definition, existential threat both ways, its one or the other, either/ or, for or against ... Some fuckers' setting up a DIALECTIC, humanity beware!.

I mean it is fucked isn't it?