Take the flour back

On 27th May at Rothamsted, Harpenden, Hertsfordshire, more than 400 growers, bakers and families from across England, Ireland, Scotland, Wales, France and Belgium marched against the return of open air GM field testing. Take the Flour Back linked arms with their European counterparts, notably France’s Volunteer Reapers and walked calmly towards the field of GM wheat before being stopped by police lines.

From the newswire: European activists link up to draw the line against GM| Final details| Take the Flour Back defend Direct Action on Newsnight| Open letter to Rothamsted| What is food sovereignty| Pull up the GM wheat, or we will, say growers| Meet-up point announced| Callout

From SchNEWS: If we stay there will be stubble|One man assault on GM crop trial in Hertfordshire|Flour to the people

Links: Take the flour back 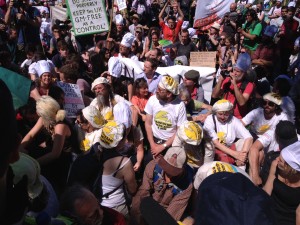 Kate Bell from Take the Flour Back stated that: “In the past, kids, grannies, and everyone in between has decontaminated GM trial sites together. Here at the beginning of a new resistance to this obsolete technology, we see GM hidden behind a fortress. We wanted to do the responsible thing and remove the threat of GM contamination, sadly it wasn’t possible to do that effectively today. However, we stand arm in arm with farmers and growers from around the world, who are prepared to risk their freedom to stop the imposition of GM crops.”

Gathuru Mburu, co-ordinator of the African Biodiversity Network, spoke on the global fight for control of our food supply. Mburu explained that: “Experimenting with staple crops is a serious threat to food security. Our resilience comes from diversity, not the monocultures of GM. Beneath the rhetoric that GM is the key to feeding a hungry world, there is a very different story – a story of control and profit. The fact is that we need a diversity of genetic traits in food crops in order to survive worsening climates. Above all, people need to have control over their seeds.”

Due to massive public opposition and resistance, GM crops have never been grown commercially in the UK. But field trials have started again, and once again we need to build a movement to defend our land and food.

take the flour back