The Conservative Party Conference came to Birmingham this week and was met with almost daily protests from angry plebs. But whilst the protests where going on outside, inside the class warfare was turned up a notch after it was announced that a further £10billion will be cut from welfare and that the government plan on scrapping workers rights in exchange for offering them "shares" by their employer. These rights such as protection from unlawful dismissal, flexible working time and maternity leave have been won by workers struggling hard over the past 100 years for a decent standard of living. To add salt to the wound, the announcement delivered by George Osborne came with the Orwellian Doublespeak "workers of the world unite". Well if that’s what he wants … 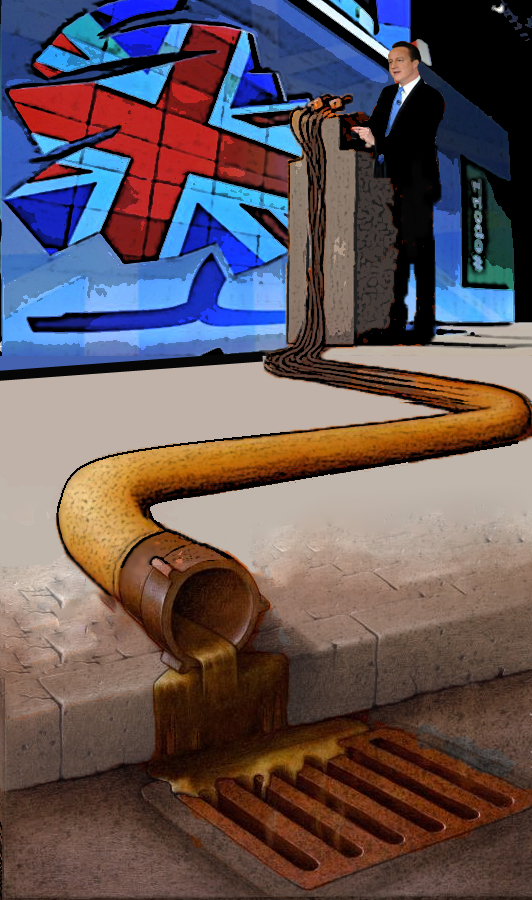 The conference opened on Sunday 6th where a 5000 strong crowd of protesters, Unions, students and unemployed marched through the streets of Birmingham. All of them angry at cuts to their local services and how the governments austerity measures are affecting them. The demonstration, organised by West Midlands TUC started in Victoria Square, marched around the city and then down Broad Street past the ICC where the conference was being held. The march was joined by an education feeder march organised by Birmingham NUT and Birmingham Against the Cuts. As in previous years many parts of the route were contained by 10ft solid steel police barriers.

Later on Sunday a demonstration organised by Hunt Saboteurs and Animal Rights activists was held outside the conference to protest the the Coalition Government's plans to tackle Bovine Tuberculosis (bTB) by attempting to cull up to 70% of the native badger population, despite strong opposition by countless animal welfare groups, scientists and activists. Police had tried to prevent people joining the protest by claiming the protest was "full", however activists simply joined the protest by finding other routes to it. Police had also attempted to kettle the demonstrators at the start of the protest by trying to direct people into a "pen" on the opposite side of the road from the conference. However, standing their ground the activists refused to move and sat down in a line in front of the Police to avoid being pushed away from the entrance. A group of Hunt Sabs then tried to gain access to building to occupy it but where prevented from doing so.

On Monday hundreds of people gathered outside Birmingham Town Hall to protest a Conference fringe event. The event organised by Coalition 4 Marriage (C4M) was aimed at persuading Tory’s to vote against Gay marriage and in favour of unequal marriage rights. The event had been officially advertised in the Conservative Party Conference fringe guide and was also promoted in the Daily Mail newspaper. The organisers C4M are know to advocate "Gay Cures". The protest labelled "Picket the Bigots" organised by LGBT campaign group West Midlands Love Music Hate Homophobia jeered and shouted loudly at Tory bigots as they entered the building. The fringe event was attended by many senior Tory bigots including Anne Widdecombe who also gave a speech at the event along with leading religious bigot former Archbishop of Canterbury Lord Carey who laughably compared himself being called a bigot to the persecution the Jews suffered during the second world war. Birmingham’s own councillor for Weoley ward Peter Douglas Osborn well know for his archaic and bigoted views was seen at the event and even came out to take a photo with a smug smile on his face.

Later on Monday a Vigil was held to remember those who were murdered in the Ballymurphy Massacre. The Ballymurphy 11 were murdered during the first three days of internment (Aug 71) in Belfast by the 2nd Battalion of the British Army’s Parachute Regiment. This same regiment went on, 5 months later, to murder 14 demonstrators on Bloody Sunday in Derry. The families are demanding an independent investigation, a full apology from the British Government and a statement that the victims were innocent.

On Wednesday Sacked Remploy workers demonstrated outside the Tory Party Conference over the closure of 36 Remploy factories with compulsory redundancy for 1,752 people of whom 1,518 of these are disabled. Remploy supports disabled people into work and one of the main things it does is provide workplaces where disabled people are fully supported. 36 out of 54 sites are closing, leaving 1,500 disabled people out of work. 85% of Remploy workers laid off in previous closures are still looking for work and with the economy in the state it’s in, this is likely to be repeated for any workers losing their jobs here. What awaits them is cuts in disability benefits and the ATOS assessment process which doctors say is driving people to commit suicide. With advice services looking to be "overwhelmed" by disability benefit casework, the future does not look bright for Remploy workers.

George Osborne wants the workers of the world to unite, apart from organising in the workplace the next big opportunity to do so is October 20th, several radical workers and anti-capitalist blocs have been announced.