Thursday 6 December: Bradley Manning's unlawful pretrial punishment hearing continued (day 8 of this hearing) with testimony from Chief Warrant Officer (CWO4)James Averhart, the Officer in Charge at Quantico Brig from August 2010 to January 2011 (see Tweets below and reports from Nathan Fuller and Kevin Gosztola).

For other court reports from this 'unlawful pretrial punishment' hearing, see: Bradley Manning's Testimony and these articles: 5 Dec, 1-2 Dec, 30 Nov and 27-29 Nov. 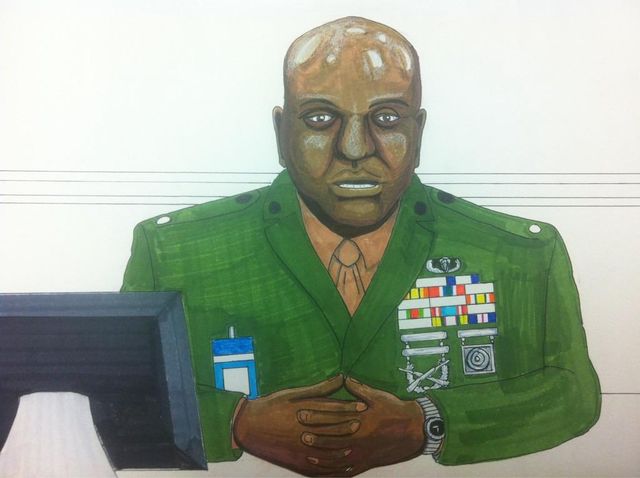 Clark Stoeckley: "CWO James Averhart claimed that he gave Manning razors so he could commit suicide when he misunderstood a question."

Tweets in roughly chronological order, earliest tweets first. The majority (those not preceded by initials) belong to Alexa O'Brien @carwinb. Others are marked as follows - NF: Nathan Fuller @nathanLfuller, KG: Kevin Gosztola @kgosztola, JR: Jesselyn Radack @JesselynRadack. Haven't included Art Superheroes' tweets in today's court report - they're all about Bill Keller of the New York Times [not] attending the hearing and they're here. Thanks as always for the great courtroom illustrations (and captions!)

6 Dec: YouTube link to interview with Alexa on RT News

Back in the press line at Fort Meade, MD.

KG: At Ft. Meade. Should be day of critical testimony. CWO4 James Averhart will be testifying.

We are saving a seat in the front row of the press pool for the New York Times.

We are about to go into the morning session of United States v. Pfc. Bradley Manning. No tweeting/filing allowed while Court in session.

CW4 James Averhart testified been Marine for 25 yrs, 22 in corrections. He worked at Quantico for 10 months.

CWO4 Averhart first learned PFC Manning was being moved to Brig 1 or 2 wks b/f got there via email from MSG Papakie.

CW4 Averhart testified that he only received email traffic re . No documents re Manning until escorts who transfered Manning.

CW4 Averhart testified to his knowledge things that had taken place in Kuwait re Manning 'suicidal gestures...noose'

CW4 Averhart testified Manning was in process as any other normal prisoner.

Averhart: I reviewed that paperwork the next day after briefing.

CW4 Averhart testified that a point scale is used to determine of initial confinement. (FYI this was overrode by DBS)

CW4 Averhart testified that once in processing been determine. Prisoner is taken to taken to birthing (cont)

CW4 Averhart testifies the difference b/w 'aye aye' and 'yes and no' instruction at indoctrination.

CW4 Averhart testifies about the DD 5-10 form for detainees to communicate with Brig.

Averhart testified items of concern were 'anxiety, depression, and upbringing'

Govt: With regards to status or confinement? Averhart: Sorry...POI [Prevention of Injury]

Averhart: ... basically his backgroud history and actions in Kuwait [were factors for] Suicide Risk.

Averhart then testifies why he waited after receiving forst recommend from forensic psych Hocter to downgrade, to do so

Averhart then testifies giving a legal interpretation of SEC NAV and the word 'shall'.

KG: Averhart testifies "shall" in "shall be done" in instructions doesn't mean take off suicide risk now. Manning could be off when he said so

KG: When person in position of power debates definition of word, should become immediately clear they're covering up something

JR: Averhart had a very Clintonesque definition of the word "SHALL." It means whenever HE felt like it.

Averhart goes thru series of Govt ?'s re 'privledges' of Manning in Brig no different than other detainees at that status/class

Re library cart (Manning couldnt go to lib since MAX) Averhart: He didn't want a Bible, so I gave him any book he would like.."

KG: CWO4 Averhart: Bradley Manning "did not want a Bible" so he "gave him book of choice"—opportunity to get book he wanted

Averhart testified that Manning could talk to other detainees, low conversational tone.

Averhart testfies that in his experience in Marine Corp MAX gets 20 minutes sunshine.

Averhart: 'Restraints are for control, again MAX he is potentially violent and dangerous'

We are about to go back in. There is more. Present time we are at the first part of defense cross.

KG: Quantico Brig OIC said prisoners in Brig were "very patriotic. They knew why Pfc. Manning was there." So he was concerned.

JR: On 4 occasions, Averhart (Quantico's Commanding Officer) noted that the *other* prisoners were "patriotic."

KG: CWO4 James Averhart said when Bradley Manning was being transported outside Quantico armed Marines would track/protect him

CPT John Haberland frm 'legal expert' for MDW was on prosec team, & accord to testimony today cc'd in cited some Quantico emails.

KG: Coombs is about take on Averhart.

KG: CWO4 Averhart said he'd be surprised if guards preventing Manning from speaking to detainees because of nat'l security reasons

At Mar 15 2012 Art 39(a) Coombs said re missing video of Averhart with Manning 'We can provide evidence your Honor. More details.

Averhart testified that 'detainee Manning' had one of the longest durations of POI status of any detainee he knew of in his 22 years.

Averhart testified he never knew Manning would be at Quantico for length pre trial confinement.
(BUT)
Maj. Gen. Terry Wolff, the general court-martial convening authority and the former commanding general of the 1st Armored Division/U.S. Division, Center in Iraq, transfered Manning to Quantico, he said, "due to a potentially lengthy pre-trial confinement because of the complexity of charges and an ongoing investigation."
More details here.

But "pre-trial prisoners are not incarcerated at a level one facility for typically more than a couple months," said U.S. Army's Commander of the Joint Regional Correctional Factiliy at Fort Leavenworth, where Manning was transferred after eight months of punitive pretrial confinement, which U.N. special rapporteur on torture, Juan Ernesto Mendez considered "cruel, inhuman, and degrading treatment."
More details here.

Averhart admitted to *some* responsibility in the poor relations and communication b/w himself and CPT Hocter the forensic psych.

H/w, Averhart framed the poor state of his relationship w/ Hocter in terms of an O-3 versus CWO4 and Brig Commander versus 'doctor'

1.) On stand Averhart seemed incapable of responding to what Manning was communicating or asking prior to 18 Jan incident effectively.

Averhart did not seem to understand defense questions, and reverted mostly to talking points. He seemed defensive with the defense

But, Averhart seemed to feel most comfortable answering the Judge's questions even when he did not know answers.

2.) Averhart's was protective of himself and his ppl and placed blame on forensic psych and Manning

Averhart was following the SECNAC which Judge said was itself unclear, 'not a lawyer' those ?'s he said were for his leadership.

Averhart, also explained away the unprofessional comments by Blenis about being a 'dick' saying he corrected Blenis...

Averhart's answered filled with at once seeming obscurification, then another detail perhaps credible.

JR: Averhart acknowledges that people ABOVE 3-star General Flynn were watching what was going on w/ Manning's treatment.

JR: Averhart said repeatedly that Manning had "low tolerance 2 frustration"--tho he was consistently described as polite/compliant

JR: Papalie & Averhart have testilied abt #Manning punching himself N head-- tho we know f/ Papa's own rpt M. just covered his ears w/ his hands

JR: Galaviz investigated Quantico's (mis)treatment of Manning, even tho he & brig leader Averhart friends since 2004.

JR: Averhart: "Naive 2 say ppl above [3-star General] Flynn were not paying stern 2 what was going on w/ Manning"

JR: Averhart abt Manning: "It's a prison, not daycare." Glad to know they're not putting kids in solitary at Busy Bee Camp.

JR: On the whole toilet paper risk, how was Manning going 2 commit suicide w/ it while under constant surveillance?

NF: Averhart is the latest of several Quantico officials to say they didn't 'trust' the psychiatrist who kept advising they take Manning off POI

NF: Recess: Quantico commander Averhart testifies that there was *never* anyone in the cells directly next to Bradley Manning's.

KG: As observer of proceedings, looked like CWO4 Averhart was making up meeting he had w/ MSGT. Blenis over unprofessional email