Our Square Isn't It?

" I went to the Playhouse Theatre, where the Lantern Parade was due to assemble from Wellington Circus. This was a really colourful event with thousands taking part. Giant puppets, youth arts, drummers, samba band and a fire show. Folks paraded from there, down Maid Marian Way, and into the square. The usual suspects there included the Sheriff of Nottingham, Lord Mayor, assorted troups of King John's Army, oh, and Robin Hood, & Maid Marian on a wire, bobbing about above the crowds. Fireworks from the roof of the council House, with guys on rotating wheels. A windmill decked with fireworks, and the crowd ohh'd and ahhh'd as yet another lot of fireworks, went off, from the Castle. Event finished at about 9pm. Now, I ask you. What other country in the world, puts on a main event of celebration in its public space, and closes down in the early evening? "

" It's lovely to have the Market Square finally finished, isn't it? Now we can start to use it again; as a great hang out, somewhere to sit around with our friends in the sun, but the question is ... Is it really our Square, or not? The council has its own agenda for the Square. It wants it kept clear of pretty much everyone except shoppers and commercial outfits. It tells us it’s employing Community Protection Officers for our safety, but all they seem to do is kick people off the steps when we try to meet by the Lions. Just try gathering there in any numbers at the moment. The point seems to be to keep away young people and anyone whose face doesn’t fit. " 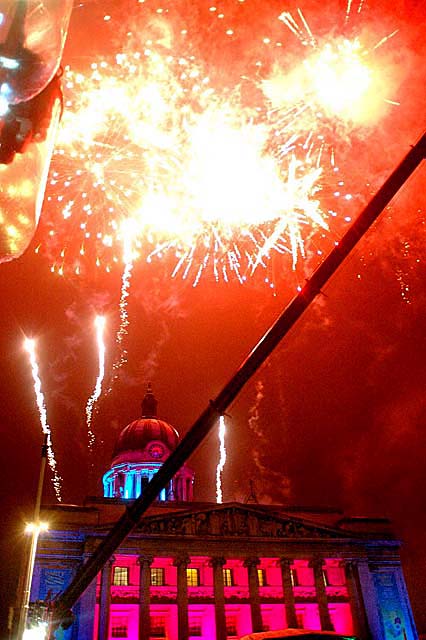 The Square has been a place for people to express themselves for centuries. We paid through the nose for its revamp. People like us should decide how it is used. The council’s theme for the opening ceremony is Nottingham’s PAST as an industrial centre, PRESENT as a ‘Green’ and ‘Sustainable’ city, and FUTURE as a city of ‘Science’. But some important aspects of their story seem to be missing ...

The Market Square has and always will be the city's no 1 public space. There to be used and enjoyed by the people in whatever way it might suit them. I remember reading in the local press about how the city council hopes to make back some of the money they spend on the square's revamp. The idea is to 'hire out' the square. Now, I might be wrong, but it might mean that only those with corporate resources are able to pay for the use of the square. Where does the council draw the line? And who decides who can use the square and who can't? And who is entitled to make that decision?