On Wednesday March 28th, people gathered on the Market Square to protest continued deportations to the Democratic Republic of Congo. After a while the protesters walked across town to Bridewell Police Station (next to the Magistrates Court) and made their feeling know about government policies. The Home Office plans to deport more Congolese people from the UK in spite of evidence that it is not only still unsafe for them to return but that the situation is worsening. In Leicester over 60 turned out in a demonstration. Other cities where protests happened simultaneously were London, Glasgow, Newcastle and Manchester.

In March a United Nations report described the situation there as ‘deteriorating’. The Bishop of Winchester objected recently in the Lords to government claims that the country was now safe, noting that every independent organisation with first-hand experience finds ministerial assurances of safety “simply incredible”. He said that the Country Guidance Case on March 28th, at which the situation could be re-evaluated by the government, “will hear fresh evidence of ill-treatment, torture and rape of returned refugees, both at the airport and at associated holding centres”. Asylum seekers in Nottingham need your help in putting pressure on the government to admit that its deportation policy is wrong. 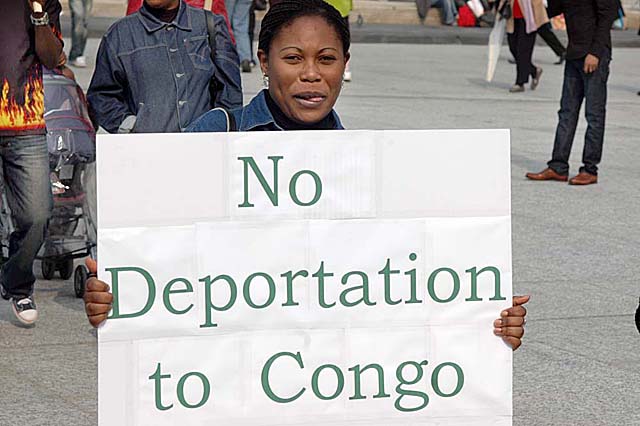 On April 12th The Government will hold a ‘Country Guidance Tribunal’ to decide whether it is safe to send people who have fled to Britian in fear of their lives back to the Democratic Republic of Congo.

But the Congo is far from safe. The situation is actually worsening. In March a United Nations report described the situation there as ‘deteriorating’. Extrajudicial killings, disappearances, torture, rape, arbitrary arrest & detention by security forces and rebel groups are all increasing. Life-threatening conditions in detention facilities prevail. Security forces continue to recruit child soldiers, and compel adults and children into forced labour. Ethnic hatred is a serious problem. Journalists and human rights advocates continue to be arrested & ill-treated, while political opposition members suffer persecution and detention.

In spite of having evidence of all this, the government are indicating that they consider the situation safe and want to return people.

Asylum seekers in Nottingham need your help in putting pressure on the government to admit that its deportation policy is wrong. The Congolese community, Nottingham Refugee Network & No Borders Nottingham ask you to attend a rally to show on April 12th. Please come and show solidarity.

This is the link to an article on UK Indymedia where you can download a short (3m18s) interview with Innocent Empi who is the Manchester Representative of the Congo Support Project.