On March 29 Zimbabwe went to the polls. The election was widely criticised with accusations of vote rigging, state orchestrated media bias and violent intimidation of opposition activists. The outcome was generally considered a foregone conclusion, which would have little to do with the opinions of most Zimbabweans and early indications are that these concerns were well placed, although events now seem to have taken a more complicated turn.

In Nottingham the Zimbabwean community used the election to draw attention to the situation in their country and camapaign against the threat of deportation which many Zimbabwean asylum seekers face. They organised a meeting at the Sumac Centre on March 28 and held at protest at Nottingham's new speakers corner on March 28.

Previous Features: Refugees In Need Of Community Protection? | Situation in the Congo is worsening as deportations continue | Nottingham Protest against Deportations to Northern Iraq (Kurdistan) :: Pictures 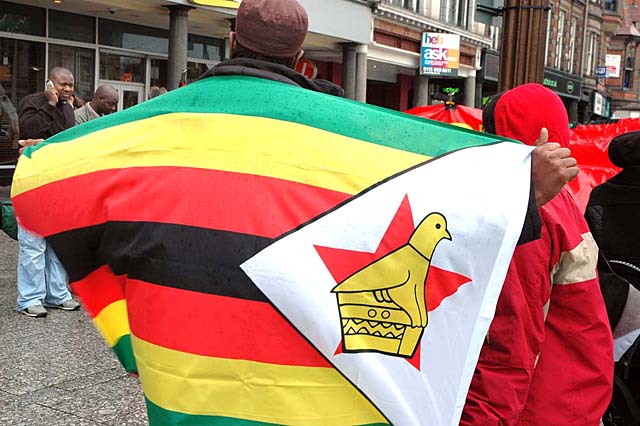 At the Sumac meeting, speakers from Zimbabwe described the situation in their country and recounted their experiences of coming to the UK. Zimbabwean food was served by Small World Kitchen and a local band made up of Zimbabweans, Ngoma, played. The Zimbabweans were clear in their opposition to dictator Robert Mugabe's regime and described the threats of torture, rape and disappearance that such opposition entailed. Whilst they were very pleased by the support shown by the large number of people attending the evening, they also described their dismay at the UK immigration and asylum system that had left most of them destitute. Having escaped poverty in Zimbabwe (where inflation currently stands at 100,000% and unemployment is believed to be in the order of 80%) they were not expecting to find themselves in a similar position in the UK. Many of the speakers stressed their positive attitudes and willingness to contribute to society, but were dismayed at finding themselves disallowed from working for a living.

On Saturday, Zimbabweans and their supporters gathered at the temporary speakers corner in Market Square to make their protest more public. It may well have been the first time the speakers corner (launched in February) was used. The inclement weather may have deterred some supporters, but a vocal group of Zimbabweans with a drum did their best to make up for that. Protestors carried anti-Mugabe placards and Zimbabwean flags and received a considerable amount of interest from the media. You can listen to interviews with some of the participants by following the link above.