Activists across Europe and beyond have dubbed April 11th and 12th as days of action for squats and autonomous spaces. This weekend, in Nottingham, a group of people have vowed to open up a new squatted space and put on various events. In an article published on Notts Indymedia they say: "By visibly taking a space in the city centre, we intend to raise awareness of squatting and so contribute to a future of squatting in Nottingham with more long-term squats elsewhere in the city."

One goal for the weekend of action is to "inspire and empower people" who have previously been unfamiliar with squatting. Discussing campaigns and sharing knowledge and skills we can support one another and be empowered ourselves, as well as drawing in new people by creating a vibrant and exciting place to be.

Get involved! The location of the venue has been announced and a full program of events has already been confirmed. See program here.

Links: Days of Action for Squats and Autonomous Spaces 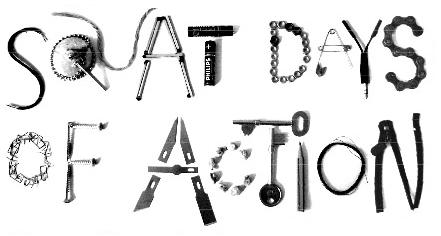 The days of action grew out of a meeting held late last year in autonomous space Les Tanneries in Dijon, France. This issued an international call "for two days of demonstration, direct action, public information, street-party, squatting… in defence of free spaces and for an anti-capitalist popular culture." Groups across Europe and beyond have responded enthusiastically. In the UK, actions are planned in Manchester, London, Reading, Birmingham and Leeds as well as Nottingham.

This isn't just about taking a space for a few days. By providing materials and information, workshops, squatters' handbooks and by relaying our people's own experiences, the hope is that people can be empowered to house themselves.

The squatters hope to put on as many events as possible in this newly liberated space. The squat will be open to the public from 6pm Friday. You're invited to turn up then if you want a nice vegan meal. Anybody interested in making use of the space should email squatnottingham@hotmail.com or phone 07534496679. Organising an event isn't a requirement, however, and if all you want to do is go along and hang around with some nice people then those involved would be more than happy to see you.