Between the 15th and 17th August, the BNP held their annual Red, White and Blue (RWB) "festival" in Denby, Derbyshire. This is the second year that the event has been held in this location. Last year there was little organised resistance, with only a single protester in attendance. This year saw more significant and diverse mobilisations against the event.

A rally was held in Codnor, by Nottinghamshire Stop the BNP and Unite Against Fascism (UAF). Despite people attending from as far afield as Brighton and Lancaster, this demonstration was relatively small and never came close to the 700 people limit imposed by Derbyshire Police. Elsewhere, activists associated with Antifa made their way cross country and attempted to barricade the road in order to prevent access to the site, resulting in clashes with police.

Local feeling against the RWB has been strong and many residents of Codnor, Denby and Amber Valley attended the demonstrations against it (some of them members of the recently formed Amber Valley Stop the BNP group). 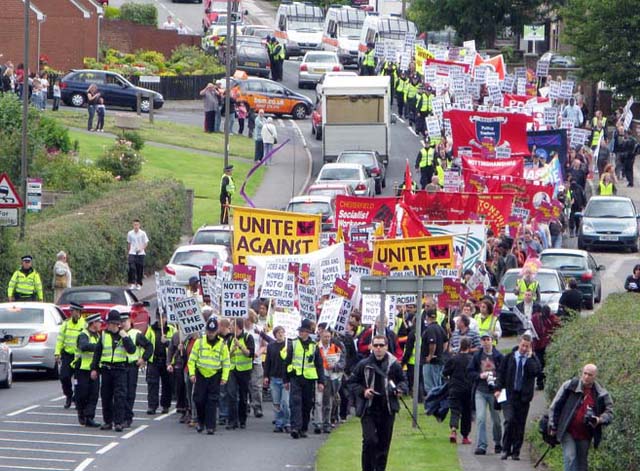 Derbyshire Police used the Public Order Act 1986 to impose a five mile zone in which protest was restricted. The "official" rally with police permission took place in the centre of Codnor, with a number of speakers including Bob Crow, General Secretary of the RMT. At around 12 noon, demonstrators marched from there to the end of the lane where the festival was being held. At this point there was some pushing and shoving, although no arrests were made. Eventually, a delegation of 30 people was allowed to walk down the lane to protest immediately outside the site.

Unfortunately, competition between Notts Stop the BNP and UAF seems to have detracted from the day's stated intention of challenging the BNP. The animosity between the two groups is not new, having already been fought out on the Indymedia UK newswire. Local activists are angry, not unreasonably that after many months of organisation and planning, UAF stepped in late in the day and attempted to hijack the event. Without consulting the local campaign, they called a demo two hours after the time announced by Notts Stop the BNP. The squabbling was so serious that at one point it actually held up the start of the march as the rival factions vied to be at the front.

While all this was going on, masked-up anti-fascists made their way to the lane by going cross-country and attempted to barricade the other end of the lane. Riot police were soon in attendance and, according to locals, it was they who initiated a violent clash. It appears that six people were arrested at this point, with a further 27 arrests being made as demonstrators dispersed through fields, pursued by the police helicopter.

There was also supposed to have been a concert in Derby that evening, organised by local supporters of Love Music Hate Racism, but the venue decided to cancel the event after being contacted by police. This contrasts sharply with the BNP's event which went ahead in the face of police objections and two failed attempts to obtain permission to sell alcohol.

The BNP hardly did much to improve their image out of the event, most ridiculously, claiming "UAF wimps threw a 'bomb' at the main gates leading to the RWB," a lie quickly retracted. On Sunday, the "festival" hosted an Extraordinary General Meeting which endorsed a number of changes to the party's constitution making it more difficult to launch a leadership challenge and entitling Griffin to an impressive "severance package" in the event that he is removed as party leader.