Protesters from Earth First! have invaded the Derbyshire site of the open cast mine twice in the last fortnight. On Monday a number of people climbed onto diggers and machinery, stopping work for over two hours. This was preceded by a highly policed picnic that took place on the site last weekend. On Saturday, local environmental group Erewash and Amber Valley Environment Network (EAVON) held a demonstration of 40 people at the site entrance.

These protests are the latest in a campaign that saw Shipley Lodge, a house on the site, squatted during the summer. The squatters used tunnels and tree houses and it took bailiffs and police an entire week to evict them, at the cost of £58,000 to Derbyshire police. The first court case arising from the eviction collapsed last Monday due to lack of evidence. 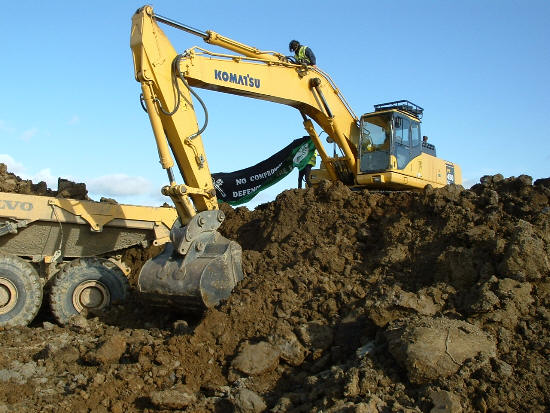 Picnic in the Park

This was billed as a follow up to the mass trespass carried out by 70 people on the site in May.

tog writes: The whole area is now ready for open cast working and coal extraction is likely to begin shortly by UK Coal.

Protesters were told that the area is still under a court order and that entering the site is arrestable (no longer civil trespass) but this didn't stop the protesters who went on anyway to have their picnic.

This was rudely interrupted as a person from the high court tried to get them to move, and seized the Veggies catering trolley and escorted some protesters off.

After they went up to the entrance of what used to be Prospect farm aka Bodge House, now demolished.

The coal extraction is about to start according to locals.

Earth First! writes: On Monday protesters from Earth First! stopped work at an open-cast coal site for over two hours – they ran onto the site and clambered on diggers & dumpers and held out banners stopping the work safely. Some of the digger drivers were very friendly and were glad to have a break as they work very long shifts, from 7am-6:30 with only lunch & half hour breaks at 10 & 3. Today work had not been able to start till 10 as nature was fighting it's own corner, with rain drowning the site, and it was stopped again at 1 for 3 hours due to the protest.

After about an hour, a few police turned up though they didn't have the vehicles to get over the mud to the protestors! After hitching a lift from UK Coal workers across the mud, they tried various ruses to get the EF!ers' names (PACE s.25 even though they hadn't yet figured out what substantive offence had been committed), and back-up arriving, the police were set to start arrests for aggravated trespass.

Eventually, people decided to leave, though they were forced to give their details and photos for later cross-referencing. The cops quoted section 68 of the Criminal Justice and Public Order Act meaning that if those same protestors return within 3 months they risk arrest.

A dead easy fun day out, just armed with a press release, banners and a desire to see a just sustainable world in the future.

UK Coal, which owns the site, plans to extract one million tonnes of coal from the 300 acre site over the next four years.

From the outset, UK Coal’s plans were opposed by local residents, several MPs and Amber Valley district council, and Derbyshire County Council refused planning permission for the open cast site. However UK Coal appealed the decision and following an appeal hearing, communities secretary Ruth Kelly overrode ordinary people’s concerns in favour of UK Coal’s interests and agreed that the scheme could go ahead.

Saturday’s protest was organised by Erewash and Amber Valley Environment Network, EAVON, and was just the latest in a long series of protests and direct actions by people concerned at the local and global effects of coal.

Speaking to the Ilkeston Advertiser, prior to the protest, Neil Padget, from The Smalley Action Group, said: "Opencast mining at Lodge House is bad enough, and the national precedent that has been set by the government, in allowing this, is appalling.

Many locals also fear, and with good reason, that UK Coal will be given permission to extend the site, and that mining in the local area may go on for decades."

While there are justifiable fears for the impact on the local community, many of Saturday’s placards demonstrated that protesters were equally concerned with the wider effects on climate chaos of coal burning.