Update: 03/08/2008 - Although the court has ordered an eviction of the squat, it is still there! Come and support! Read this feature article for more info: Derbyshire Opencast Mine Squatters: Eviction Imminent

On 18th June, climate campaigners from ‘Leave it in the Ground’ occupied the UK Coal’s Lodge House site in Derbyshire by barricading themselves in a disused farm building and taken to the trees on the site of the open cast mine.

Under the cover of darkness activists secured themselves in the Prospect Farm building, on the site which is about to be devastated by huge machines. Food and supplies have been taken in for a long term occupation and barricades’ have been set up preventing police form bringing in specialist equipment down Bell Lane, Smalley Derbyshire into the heart of the site. Similarly, people are locked on by their necks behind the doors preventing force being used to gain entry. The protesters have claimed squatter’s rights. 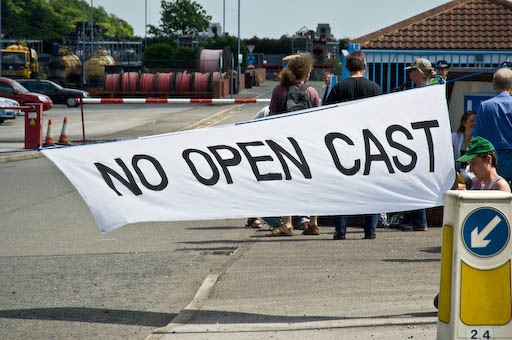 At Lodge House today, Andy Green said “We are here because the single greatest threat to the climate comes from burning coal. Coal fired generation is historically responsible for most of the CO2 in the air today – about half of all carbon dioxide emissions globally. Coal form open cast mines is dirtier than that from deep mines, so it is even worse!"

Lodge house is owned by UK Coal, Britain’s largest coal company who plan to extract one million tonnes of coal from the 122 hector site. Protestors claim this will devastate the area. Local councils, residents and local environmental groups have all objected to the plans, however, the Environment Secretary Hilary Benn granted planning permission in 2007 and work is set to commence imminently.

New open cast mines are being actively supported by the government and the number of opencast mines going into the planning process and being approved is on the increase.

The Leave it in the Ground, is part of the Network for Climate Action (2) and its allies, has seen over a dozen actions take place around the UK including the occupation of a coal train heading for Drax power station. Protests have focused on the companies responsible for runaway carbon dioxide emissions, as well as those promoting false solutions to climate change.

“We are taking action to prevent the coal industry bent on economic growth from destroying our future,” said Julie Lee from Leave it in the Ground. “If Gordon Brown gives the go ahead to a new generation of coal fired power stations beginning with Kingsnorth in Kent, it will undermine – perhaps fatally - Britain’s chances of meeting its climate change targets. If Britain is to cut its emissions by 80% by 2050, the eight planned new coal power-fired plants alone will wipe out half of our carbon budget.”

A further demonstration is planned for 14th July at UK Coal’s Head quarters in Doncaster.

2. To combat open-cast mining, a new action group "Leave it in the Ground" has formed, supported by Earth First! As well as other environmental groups.

It is proposed that the 122 hectare site will produce one million tonnes of coal over five years, after which the land will be 'returned back to its natural state'. However, UK Coal will not be able to replace ancient edges and mature trees, and their licence enables the company to expand beyond the 122 hectares without needing further permission.

Coal is the dirtiest form of power generation known to man. Top NASA scientist James Hansen recently remarked: “The only practical way to prevent CO2 levels from going far into the dangerous range, with disastrous effects for humanity and other inhabitants of the planet, is to phase out use of coal except at power plants where the CO2 is captured and sequestered.”

Some more images of the occupied house 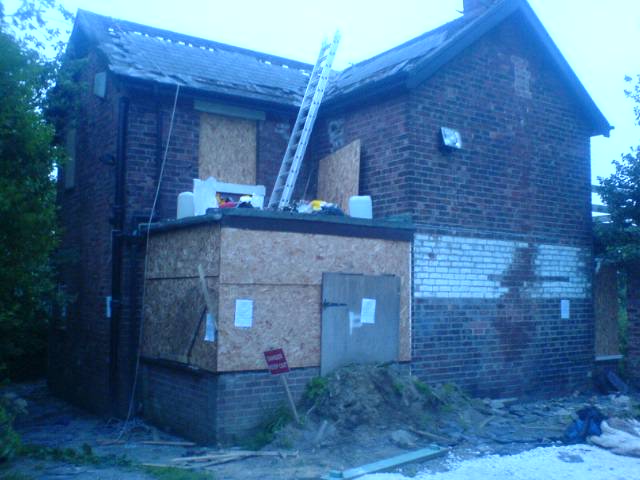 The occupied house - entry only via the roof 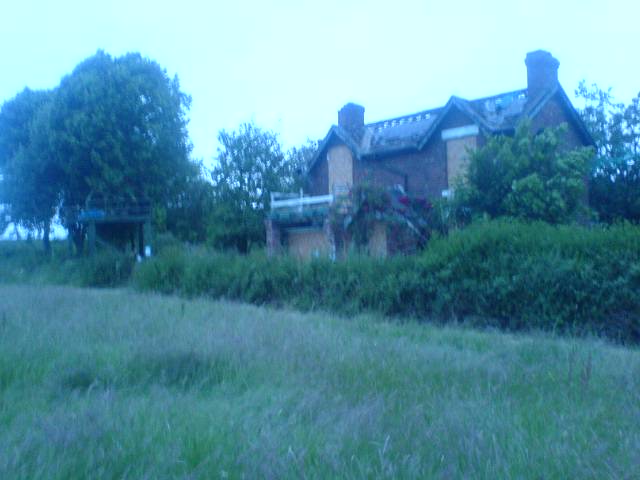 The lovely setting around the occupied Lodge House

Everyone welcome to come down and see the beautiful surroundings which UK Coal want to rip out of the ground.

Leave It In The Ground

The chap at the Lodge on Bell Lane is not letting people past and claiming he owns the road (he is an angry farmer with dog).

Alternative access is from shipley - when coming from heanor, turn right off A6007 (Ilkeston rd) as you leave shipley (into 'the field'), turn right onto tarmac road after the steiner school (one left) and go up this road. Bear left past bridge and lake on right and turn right through gate just before big house. You are now on Bell lane and site is the house next to road works after bridge.

if you go take lots of water

Directions to the site:

For more photos from the site see:

First attempt to evict the occupiers of Bodge House on 30th June was a spectacular flop. The registered owner of the site is Harworth Mining International Limited. The outfit applying for a possession order are Harworth Estates (Agricultural Land -Trashing Of) Limited. OK, we added the "Trashing Of" bit to that otherwise bucolic title, but otherwise report what is alleged to be just a change of name yer honour. Their problem was they hadn't bothered to give the court any actual proof of this supposed change of name.

"Ah yes, yer honour, the registered owner of the house is actually Mr D. Beckham, but that's me, honest, I've just changed me name, see. So go on, give us a possession order. Err..no, I left the bit of paper at home, but you can trust a chap like me, can't you?" Even the most bigoted of judicial dimwits isn't going to fall for that one!

This, and other drongo defects in their papers got Harworth Whatever-They-Call-Themselves-This- Week into self-abasement rituals and scrabbling for an adjournment before a scathing judge. Ha!
They'll be allowed to have another go on 18th July, but meantime they have been set further homework with a deadline of 10th July. If that's only half as much crap as their first attempt this could run and run.

MEANTIME, GET DOWN THERE AND SUPPORT THE OCCUPATION IF YOU CAN