Last Thursday night, 23 October, local campaigners against fracking and other 'unconventional' (extreme) gas extraction methods held a public meeting in Borras, Wrexham not far from where Green Park Energy, bought out by Dart Energy, bought out by IGas, have just been given permission to undertake exploratory drilling ostensibly for coal bed methane. The local pub was packed out with standing room only and not much of that as the local community turned out in force to find out more, many angry that the unelected and unaccountable Planning Inspectorate had overturned the decision of Wrexham council's Planning Committee whose members had voted (17 to 2) to reject the planning application back in March. 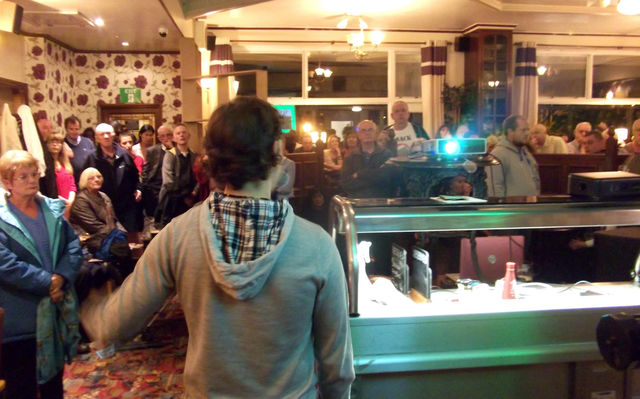 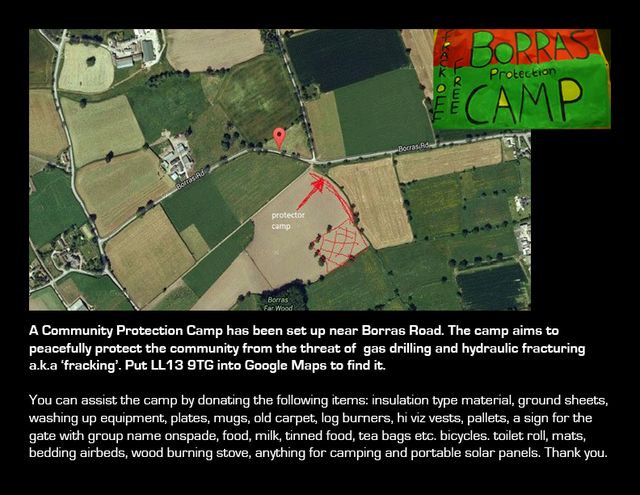 REPORT OF THE MEETING

With ten minutes still to go before the start of the meeting, every seat was filled in the conservatory of the Cunliffe Arms, people were standing at the back and a queue of people was forming outside the door unable to get in. Faced with the alternative of turning people away, we took up the manager's offer to use the main bar area instead, apologised profusely to those who'd already made themselves comfortable, set about moving ourselves and all the audio-visual equipment into the next room (which wasn't nearly as simple as it sounds) and improvised as best we could with the screen up on a table behind the food counter and the mic alongside after it became apparent that the pub PA system wasn't working. The bar continued to fill up and was packed by the time we finally got started, with the audience showing admirable patience in the meantime.

Films from Australia and America

The meeting began with two short films: first, some inspiring Australian footage [YouTube Link] from the Northern Rivers area of New South Wales where, having decided that they couldn't rely on the government to protect them, local people have come together in large numbers to 'Lock the Gate' on the drilling companies in defence of their land, air and water. Resistance from all sections of the community in 2014 resulted in licences for coal seam gas (known here as coal bed methane or CBM) being withdrawn and Metagasco's share price dropping to an all time low. Moving on to the US in the second film clip [YouTube Link], Pennsylvanian Farmer Terry Greenwood spoke about how his animals became sick and died through drinking water poisoned as a result of fracking. Terry said ominously that the pollution caused by fracking would soon be killing humans too; this year, Terry himself died of brain cancer.

These clips were followed, now we'd managed to rig up a working microphone, with a number of presentations from local people who, learning of plans to drill in Wrexham and concerned about the damning evidence against unconventional gas extraction coming from countries that have had it long enough to know the truth, have educated themselves about the issues and taken action.

Shay Brightman spoke first about how his concern for the environment and fear for his young son's future were behind his decision to join with others to occupy and set up camp on the Borras test drill site last week following the overturning of the democratic decision of WCBC Planning Committee by the Planning Inspectorate and granting of the exploratory licence to test drill for coal bed methane there. Shay said he had been overwhelmed by the support the camp had received in the six days since it was established, with numerous people visiting every day and keeping the camp supplied with essentials such as water, food and wood. The plan is to stay for "as long as it takes" to get the message across that IGas isn't welcome here.

Strength and solidarity in numbers

After Shay's address, Dianne Parrish gave the main presentation of the evening. Confronted with the sight of a drilling rig across the fields at nearby Farndon when closing her bedroom curtains one evening, Dianne recounted how she had at first felt vulnerable and powerless as one individual against a huge corporation, but this changed when she joined with others through the Frack Free Dee Coalition which has grown rapidly to include many groups in the Dee Valley area of the Welsh-English borderlands, working together and sharing skills and resources. Dianne showed a series of slides to demonstrate how the country has been 'carved up' into licence areas, all of which are now under threat, and a short film that showed what the landscape might look like with hundreds of wells in the vicinity if the government and drilling companies get their way. She explained the various unconventional gas extraction technologies and their respective dangers, and how we might start to get organised here in Wrexham to confront this threat. In particular, Dianne noted how we were being given the impression that this is one 'harmless' test drill when even the Planning Inspector has acknowledged that nearby properties will be adversely affected, when it is a precursor to the large scale industrialisation of the countryside and when test drilling itself has inherent dangers with particular concerns locally in relation to the geology of the area and water sources.

'An X over my house'

Paul Beer lives close to the Upton-by-Chester proposed drilling site on an organic dairy farm, which has already been occupied for six months to protect the land from another Dart Energy/IGas drilling plan that he first found out about when he saw a map of planned drill sites with an X over his house. Paul added to Dianne's presentation with some more information about unconventional gas technologies including underground coal gasification; conservation areas on the Dee Estuary and at Hilbre Island on the Wirral are currently under threat.

Genny Bove gave a short overview of the situation in Wrexham, the history of the licensing of the Borras site as part of a licensing area covering the whole of Wrexham, the planning application and the various incarnations of the company that was Green Park Energy, bought out by Dart Energy (fresh from being driven out of Australia by the tightening of legislation there) and in turn bought out by the much larger IGas. IGas' share value has halved so far this year, information that was met with a rousing cheer from those assembled. Between the planning application going in and the final vote by the Planning Committee at the end of March, the drill rig and then a protection camp had been set up in Farndon helping us to realise that this is for real [ 1 | 2 | 3 ]. Following the council's decision to refuse permission, more meetings were held in anticipation of the appeal [appeal documentation here]. Work continued through the summer [e.g. Day of Action] to raise local awareness and encourage people to register their objections. Genny set this in the wider context of a new round of licensing that has extended the local drilling area to around 60% of the country and the government pushing through the Infrastructure Bill that will allow drilling involving "any substances" under people's land without permission in spite of a consultation exercise that had 99% of respondents opposing the measures. We have repeatedly been told by the company that this is "not fracking" as if coal bed methane extraction is better and safer, which it is not and which in any case often ends up with hydraulic fracturing. At Barton Moss near Manchester, IGas repeated the lie about "not fracking" until a week after the test drilling had finished when it announced it had found shale gas (that can only be extracted by fracking). We need to learn from the experiences of other groups here, in the US, Australia and everywhere, and be ready to challenge the corporate lies we're being fed.

A moratorium on fracking?

Wrexham councillor Arfon Jones then spoke about how he would be calling on other councillors to make the symbolic gesture of calling for a moratorium on fracking and coal bed methane in Wrexham as part of moves to declare the whole of Wales 'Frack Free'. He encouraged local people to write to their elected representatives, including the Minister for Natural Resources, Carl Sergeant in the Welsh Assembly and local Assembly Member Lesley Griffiths.

In answer to a question from the floor about whether substances in the water pumped in and out of wells were toxic, Luke Ashley spoke from his experience as a conventional oil drill worker in the North Sea and his subsequent extensive research into unconventional gas extraction, explaining that there are dangers both from toxic substances pumped into wells, many of which are known carcinogens, as well as those already in the ground and released by the drilling, which include radioactive materials. Luke explained that there are structural problems with the integrity of drill casings, all of which will leak over time. In terms of recent evidence of leaks, there is, for example, a huge methane cloud currently sitting over a CBM drilling area in America and we know that in many areas people are unable to drink from their local water supplies due to contamination. Luke has set up and runs the North East Wales Anti-Fracking Action Network [facebook page].

Michelle spoke briefly about her research into the geology of this region, the fractured nature of the rocks under the Borras site, the instability of the coal mines and the presence of particular geological features. Taken as a whole, these make subsidence, migration of gases and pollution of the land and water virtually inevitable consequences of drilling activity. 'Technical information and research' is one of the working groups that is being set up in response to the threat of drilling in Borras and Michelle invited everyone to sign up to groups where they could make a contribution. Other groups currently being established are: Media & Public Relations; Lobbying & Letter-Writing; Planning Matters; Legal Issues; Leaflets & Graphic Design; Facilitating Meetings; Camp Presence & Support for Camp; Presentations & Public Speaking; Public Engagement & Outreach; Website & Internal Communications.

By the end of the evening, we had a box full of completed forms and multiple offers of help to add to our existing efforts and turn this into a campaign to be reckoned with. This technology has the potential to kill the rich and their children as well as us and ours and for that reason the campaign against extreme energy extraction is likely to resonate with a wise cross-section of the population. Even people who don't get or believe the technical, geological and health-related arguments are likely to sit up and take notice at the prospect of their value of their properties plummeting or when they can't insure their homes against fracking risks.

How we're going to win this

We know that the value of IGas' shares has dived during the course of this year and we know that there is in any case little profit in this industry unless and until it gets itself established. Every planning application that's refused and has to go to appeal, every site that is occupied, every legal challenge that is brought, every planning condition that we can ensure is enforced to the letter, every truck that is held up, every gate that is locked or blocked by local people refusing to have their democratic rights trampled on... all of these cost the frackers time and money and discourage the investment on which the industry relies. If they think we're going to take this lying down, they might be right, but it'll be their trucks we're lying in front of!

Everyone's invited to show up next week, same time (7pm), same place (Cunliffe Arms, Jeffreys Rd, Borras) when we will start organising in smaller groups to share the workload and make a bigger impact.

See also: Frack-Off and Extreme Energy in the Marches