The UK antimilitarist movement is building fresh coalitions against new developments in state militarism. In March activists converged in Bristol to confront an unmanned drones conference and a ‘Disarm the National Gallery’ campaign was launched in London to end arms trade sponsorship of the gallery. This week delegates visiting the annual Counter-Terror conference were met by a counter-protest and Vince Cable's speech at the UKTI conference was disrupted.

Smash EDO, who have campaigned to shut EDO MBM down for eight years are launching three months of action, from May 1st to August 1st, next week with a mayday noise demonstration, a bad music demonstration and a phone and twitter blockade to name just a few of the planned events.

And in Scotland, Faslane peace camp are calling for 30 days of action against Faslane nuclear base. 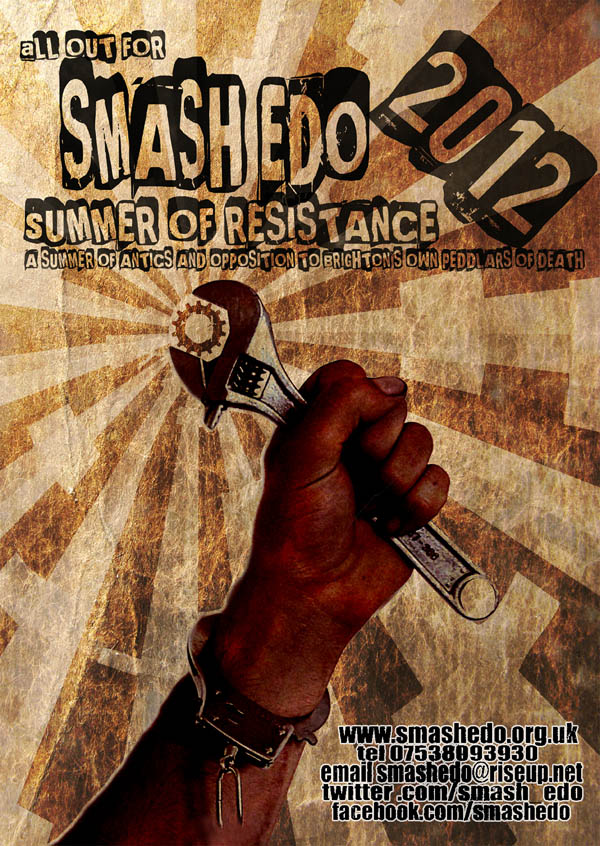 The UK antimilitarist movement reached its height in terms of boots on the streets in 2003 with the outpouring of public rage against the Iraq war. However, that resistance proved ineffectual due to the focus on A-B marches. Since then, groups have come together to forge a more militant movement with direct action at its core. This movement focused on targeting those who made profit out of war.

That movement reached a high in 2008 and 2009 with successful mobilisations against EDO MBM in Brighton(1, 2, 3) the DSEi arms fair in docklands and against those profiting from Israel's attacks on Gaza.

The all-out attack by the Coalition on ordinary people's livelihoods has meant that many turned their attention away from anti-militarist campaigns to focus on opposing the state's austerity measures. However, overseas repression has continued apace, with UK troops and aerial bombardment in Afghanistan continuing. Drone technology has changed the face of warfare and allowed attacks to be carried out without the need for troops on the ground or for the declaration of a state of war. The CIA has recently launched drone attacks in Pakistan, Yemen and Somalia. Meanwhile, in the UK, civil society becomes increasingly securitised as military technology, tested in the battlegrounds of the War on Terror, is used to control borders and police demonstrations. The threat of war with Iran is ever present and our resistance needs to become a tangible threat to state militarism.