A resurgence in activism over Afghanistan?

As the Taliban prepares to open a political office in Qatar, the US stalls on releasing Taliban prisoners and a leaked US military report alleges that "the Taliban's strength and morale are largely intact despite the Nato military surge, and that significant numbers of Afghan government soldiers are defecting to them", the UK is witnessing a small upswing in anti-war activism over the raging conflict.

Last month peace activist Maya Evans returned from a month-long delegation to the country with US activists from Voices for Creative Nonviolence, and she is now embarking on a speaking tour around the UK. Whilst in Afghanistan she helped deliver over £2,000 worth of aid, raised by NUJ members at the Financial Times and the readers of Peace News, to internally displaced Afghans in the capital. She is believed to be the first British peace activist to visit the country since 2001.

Meanwhile, photojournalist Guy Smallman - himself recently returned from a trip to Afghanistan - will be speaking alongside ex-soldier Ben Griffin at an event in London on 9 February, and activists are preparing to re-establish a peace camp outside RAF Waddington in Lincolnshire in anticipation of the UK starting to use the base to pilot its Reaper drones in Afghanistan later this year. In September last year, the RAF announced its 200th drone strike in Afghanistan. British drones are currently piloted by RAF pilots based in the US. In December, Catholic Workers occupied the entrance to Northwood Military HQ in protest at the ongoing occupation of Afghanistan.

Thoughtful observers have long pondered the question why, given the undoubted horrors of the war in Afghanistan as well as its deep unpopularity with the general public, there continues to be so little UK activism focused on the war. Indeed, for many years the only UK-based protests marking the anniversary of the 2001 invasion involved a tiny handful of people [ 1 | 2 | 3 ]. Similar actions took place on the tenth anniversary last October [ 1 | 2 | 3 | 4 ], as well as a Stop the War rally but even the latter was a relatively small affair compared to earlier 'national' Stop the War demos.

Whether recent events herald a change on this front remains to be seen. 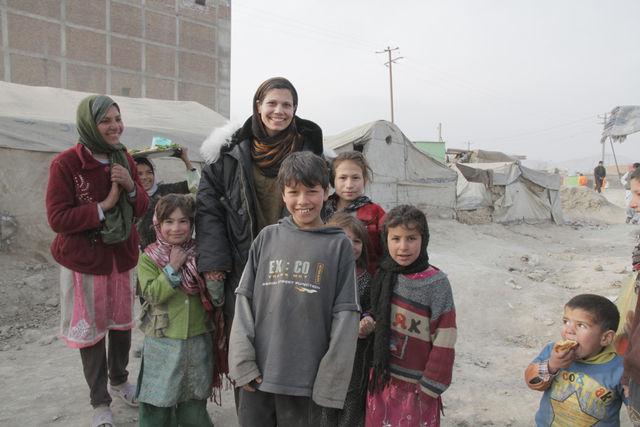 Maya Evans with children in a refugee camp