MayDay 04: Against Borders and Precariousness!

Mayday 2004: A weekend of protests around the world. In Europe the focal points of protest and mobilisation have been three main cities of three different countries. Here in the UK there were innovative protests in many cities on Saturday 1st.

Update Wed 12 May - Read an Evaluation of IMC Facilities in Dublin (EU Mayday Mobilisation) by some IMC-UK volunteers.

Update Wed 5 May - Twelve people have been remanded in custody for another week in Dublin on public order charges following Saturday evening's MayDay protests.
Read a text by participants of the 'Anarchist Confrontational Bloc' in the demonstration to Farmleigh: "Why we pushed through police lines". [pics].

Update Mon 3 May - The weekend of protests against the EU Summit in Dublin continued with prisoner solidarity demonstrations outside the prisons and with a Reclaim the Streets party. Timeline of events, [pics]

In Dublin as the EU 'enlargement' summit got underway a weekend of protests started with the largest Critical Mass the city had ever seen. There were solidarity protests outside the prison where uk nationals are being held.

On Saturday there was a 'No Borders Protests' against fortress europe, a march for Another Europe [Photos|Video]. A private park was opened to the public [1]. The day finished with Bring the Noise demonstration towards the EU summit where police attacked the marchers with water cannon and battons. IMC-IE Timeline and Reports | IMC-IE Feature.

Barcelona and Milano were the focus points for this year's Euromayday against 'precariousness and social exclusion.' Berlin saw clashes between left and neo-nazis, and with the police protecting them.

Actions seen in cities around the country.

London hosted the most successful Critical Mass, as a 10th anniversary ride. There were protests, actions and demonstrations including the TUC traditional demonstration, a Disarm DSEI Mayday Action, an Anarchist Mayday Cricket and a Mayday Picnic in Hyde Park.

Security guards in Cambridge shopping centre over reacted to a mayday picnic. This excellent video shows it all.

In Glasgow, a Mayday Carnival [1 | 2 | 3 ] has been called, as well as a march and rally in Edinburgh, whilst in Bradford there are plans for "Mayday Mayhem." In Lancaster, Preston and Burnley, the ‘Mayday Mayhem Roadshow’ reclaimed the weekend with gigs and info displays, a rally and a picnic [pix 1/2].

Friday April 30 - This year's Mayday celebrations started with Critical Mass cycle rides in Dublin and London. Dublin saw the biggest ever Critical Mass in the city when over 500 people defied over two months of media hysteria and took to the streets in a festive atmosphere [Report | Photos: 1 | 2 | 3 | Videos: 1, 2 and 3]. In London up to 1,500 people participated in the 10th Anniversary of London's Critical Mass. [Reports and Photos 1 | 2 | 3 | 4 | 5 | Pic Gallery ] Also, the offices of Spearhead Exhibitions, organisers of DSEi, Europe's largest arms fair, and Reed Exhibitons, their parent company were visited by protestors.

Saturday May 1 - actions and celebrations in the UK started early in the morning. In Oxford crowds gathered to see the Mayday dawn for a Wake Up! Wake Up! It's Yer Samba breakfast!!. Later in the morning a demonstration took place in Nottingham. In London the annual TUC Mayday march ended in Trafalgar Sq [Photos: 1 | 2 | 3 | 4 | 5], Also, London Animal Action supporters demonstrated in the Soho area [Photos: 1 | 2] In Cambridge activists set up a non-commercial space within a shopping centre and were dragged out by security guards [Action's leaflet][report][video]. In Sheffield the Social Forum organised a protest against debt and poverty [photos] In Manchester there was a mad picnic and a critical mass. In Nottingham there was a march from Robin Hood Statue to Market Square. In Lancaster, Preston and Burnley Mayday Mayhem was celebrated with several events, including a picnic (pix1/2, gigs, rallies and film showings.

In Dublin, a private park in the centre of the city was opened and occupied; around 100 people participated in a No Borders demonstration [reports 1|2]. Video footage of the march in Dublin, called by mainstream left wing groups.

At 6pm a crowd of about 3000 people gathered for the Bring The Noise March to the EU Summit. At around 8.30pm tension increased when riot police brought in water cannons trying to disperse the crowd. Clashes between demonstrators and riot police occurred, with the result of 25 people arrested and several injured [Statement: "Why we pushed through police lines",First hand account]. At around 11.30pm the crowd finally dispersed. Photos: 1 | 2 | 3 | 4 | 5 | 6 | 7 | 8 | 9. Videos: 1 | 2. Reports: 1 | 2. Irish tabloid coverage 1| 2.

In Barcelona, the Euromayday Parade started at 6.00 in the afternoon with a 10 to 15,000 strong crowd marching towards the city centre Photos: 1 | 2 | 3 | 4 | 5 | 6 | 7 | 8 and Video.
At the end of the demo and around 11pm, the old police station of Via Layetana was temporarily occupied by a large crowd [Video]. Riot police eventually moved in and charged those around the area whilst evicting the squatted building. People did then reagroup in Portal del Angel where heavy police charges also took place, with the result of several people being injured and taken to hospital. At around midnight, the organisers of the Parade decided to call off the mobilisations for the day. Read a report and first hand account of the day.
In Milano, the Parade was joined by between 80 and 100,000 people marching through the city centre, dancing to the sounds of several sound-systems, and doing some actions along the way. Photos: 1 | 2 | 3 | 4 | 5 | 6 | 7 | 8 | 9 | 10 | 11 | 12 | 13 | 14 | 15. Photo Galleries: 1 | 2

Monday May 3 - The Mayday weekend of actions against the EU 'enlargement' Summit continued in Dublin. A Reclaim the Streets was joined by around 600 people in the city centre. The party started at 3 pm and went on untill well into the evening. As the street party was winding down at around 9.30pm, reports came in of police activity in the surrounding area.
Timeline of Events | First hand report | Photos | Video.

And last but not least Mayday 2004 marks the 4th anniversary of Indymedia UK. Happy birthday IMC-UK! 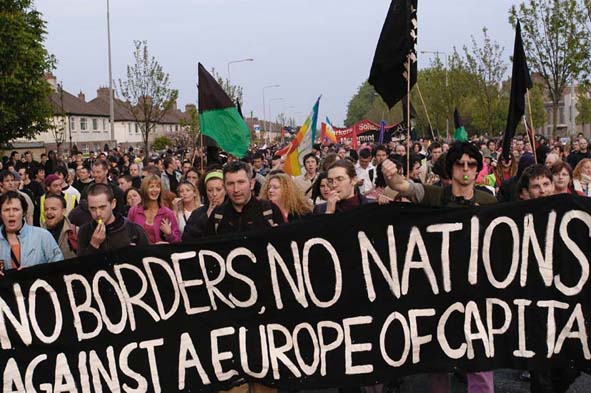