This years Mayday Events saw Euromayday protests and actions happening in 20 cities around Europe, all based around the theme of 'precarity'[Photos] The Euromayday events have been happening over the last years in Europe, and getting bigger every year, with parades of causalised workers, temps, part-timers, immigrants and unemployed marching through Europe's capitals to demand new social rights for the most marginalised [see audio background interviews 1, 2 from globalproject.info]

Precarity Action The location of the euroMAYDAY/Flexmob action were texted to people's mobile phones at the last minute. Several hundred turned up at the Hackney Tesco, including Sambistas and a banner "All we have to loose is our chainstores". They stayed for some time before a huge police presence moved them out. Reports of several violent arrests [Arrest appeal]. The day finished with everyone continuing on to London Fields
[ Timeline | IMC London Feature | Precarity Assembly Report | Personal Account ] [ Reports and Pictures: 1 | 2 | 3 | 4 | 5 | 6 | 7 | 8 ] [Videos 1 | 2 | 3 | 4]

At the same time, the TUC Trade Union March formed at 12pm [More] At 2pm, the Spacehijackers cricket match was played in Parliament Square [report]

London Critical Mass celebrated their 11th year of monthly bike rides with a huge event on Friday 29th April [Pics 1 | 2 | 3 | 4 | 5 | 6], as well as a G8 bike ride benefit in the evening of May 1st. Other Critical Mass rides took place around the country for Mayday weekend.

A Reclaim The Streets Party started off at 1pm [Timeline and Reports], the Camcorder Guerillas screened their new G8 film "Why Close the G8" at 4pm, while the usual STUC Mayday Rally takes place at George Square at 11am. On Friday there was also a Critical Mass bike ride.

See Indymedia Scotland for further round-up of the days events.

In Birmingham there was a march through The Bullring™ in support of workers' rights in response to the asset stripping and demise of Rover which clashed with a pro-capitalist bloc extolling the virtues of unfettered capitalism, ending with a picnic in Pigeon park by the cathedral [Report].

In Bradford the first Critical Mass Critial Mass for some time went ahead successfully this Mayday. [Report].

In Lancaster Mayday Picnic on the Priory field at 1pm, as part of the reclaiming International Workers' Day festival.

In Sedgefield (Blair's constituancy) there's a pre-election Mayday WMD Festival running May 1st-2nd with music, comedy and a peace camp set up.

Liverpool saw a critical mass on the Friday followed by a Trade Union march and then gig on the first. [Announcement]

Manchester held a party on Plattlands Park with a critical mass leading off to it. [Announcement] [Audio report]. There was also a Trade Union march, and before the Radical Bookfair.

In Ireland, the scene of last years major Against Fortress Europe Mayday demonstrations, Dublin will have an Anti-G8 Reclaim The Streets Party on Monday 2nd, as well as a Euromayday Precarity Block on the usual Trade Unions march on Saturday 30th April. 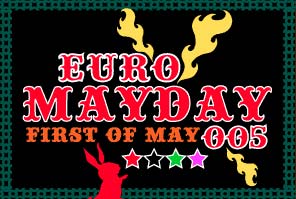 [12.00] Led by text messages, people gather at two north london tube stations for the euroMAYDAY/Flexmob action.
[14.00] Around 250 people are around the Tesco Megastore near Hackney Town Hall. A Samba band played inside Tesco, and has now moved on, strongly encouraged by about 150 metropolitan police. [Photos 1 | 2 | 3 ]
[14.30] The crowd has been surrounded by the Police in what looks like a Section 60, and activists are being arrested one by one. A large banner read "All we have to lose is our chainstores". [Reports 1 | 2 ]
[14.45] 50 or 60 people are now surrounded by over 100 police who continue to arrest, stop and search individuals, and are reported to be acting very violently to the situation. The rest of the crowd is being split up and harassed. [ Photos 1 ]
[15.30] The crowd is marched down Mare Street, surrounded by met police. The Samba is playing and the banner unfurled again.
[15.50] The police have released the crowd into London Fields, leaving 150 people and the Samba to celebrate Mayday in peace.
[16.00] Arrests have started again with four or five more people being dragged away violently.
[17.00] With about 100 left in the park and the samba playing, everyone is enjoying MayDay.

[TUC Trade Union March] Thousands of people took to the streets for the annual Mayday march to Trafalgar Square. Visitors to the capital were given more than the usual sights to look at as the marchers passed by in a noisy and good-natured parade. Once in the Square marchers enjoyed music, poetry and dance, as well as putting up with the usual dull speeches from jump-on-the-bandwagon politicians. The size of the march confounded those who had predicted that this year's event would be a damp squib. [ Photos ]

[13.30] Reclaim the Streets: A few hundred people have met up in Buchanan Street, where a Sound System started up. A second Sound System arrived, full of clowns, with banners saying "Cre8 not G8", Make Poverty History" and DIY Party People". All are now moving off on a route around the city with a good atmosphere, and little police presence apart from 4/5 fit teams photgraphing everyone.
[14.45] The party protest has now moved to St. Vincent street, where there was an attempt to get a third sound system in, one van made it but not the rig. Still good natured and taking over the streets!
[15.45] After a few scuffles at the entrance to the park, where the crowd negociated the someones release, the 3 Sounds Systems are now playing and the party continues. Three arrests during the day [unconfirmed]
RTS Photos: "[1]"