This morning a banner was hung from a tall crane near Edinburgh central train station saying "No More Brown Wash" [full report]. The campaigning group WDM have been critical of both Make Poverty History and the Governments G8 spin [audio: mp3 from crane].

Later in the morning an Anti-Shell demonstration took place outside the Irish Consulate, with people protesting against Shell's plans to turn an area of outstanding natural beauty into an onshore oil refinery. The protest them moved by the streets with yet another over the top police escort [see report | pics]

Meanwhile a small prisonners solidarity demonstration took place outside the Court. On the other hand, police FIT teams have been active in central Edinburgh all day stopping and searching people at random.

Update 20:00: The Legal Support team informs that the Section 60 has now been imposed at the Hori-Zone rural ecovillage. Reports of police helicopters activity in the camp. On a more positive note, an IMC access point is now opperating inside the camp. Also the new Trespass Law has been brought into a effect around Gleneagles suspending open access in the area around the hotel.

Dungavel Protests
Around 1000 people are demonstrating at a rally at Dungavel Detention Centre. Earlier some of the coaches were searched by police who took people's names and addresses - some demonstrators were also temporarily surrounded by police. All is calm, but marches are not allowed around the detention centre and there are thousands of police there. Instead the protestors are listening to some moving and powerful speeches from ex-detainees from the centre. The detainees however have been moved out of Dungavel for the period of the G8. [Photos 1 | 2 | 3]
[see Dungavel Detainee Interview (audio mp3) | Borders at the G8 Feature | IMC Migration Section Amnesty Report on Detention Centres (june)]

Unconfirmed reports have also come in of people arriving back in London being questioned under anti-terrorism legislation and filmed. 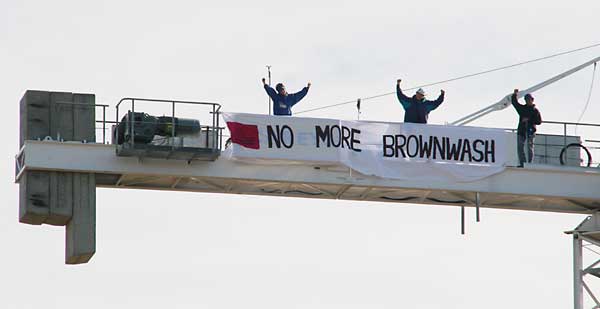