Since thursday (21/7), authorities have been scouring London in the hunt for at least four people involved in an attempted copycat attack just one fortnight after the multiple bombing on the capital's transport system which left at least 56 people dead. All four 'devices' in the latest incident failed to explode and there were no injuries.

A statement posted on an Islamic website in the name of, Abu Hafs al Masri Brigade, an al-Qaida-linked group claimed responsibility for both sets of London attacks. The group has threatened "a bloody war" on the capitals of European countries that do not remove their troops from Iraq within a month.

The following day was extremely tense with many people expecting a follow up attack because the bombers had left too much evidence behind for them to believe they would not soon be captured. Security around the capital was increased with so-called 'random' stop and searches introduced on London Transport but many people stayed away from the city.

At around 10am (Friday 22/7), police shot dead an unarmed man on a train in south London. They had trailed him from a block of flats which they had under surveillance, allowing him to board a bus and then enter Stockwell Station, despite apparently believing that he was a sucide bomber. [first reports | more on shooting | train driver threatend ]

Transport remained in chaos all Friday and into the weekend with many security alerts, one of which involved armed police at the East London Mosque. Police has since raided several addresses and made at least three arrests. The dragnet extended to Birmingham where one man was arrested under terror laws but later released uncharged.

News of the 'shoot to kill' policy raised urgent concerned from Muslims and non-Muslims alike, especially since the man (now named as Jean Charles de Menezes) turned out to be completely unconnected with the bombers. After police admitted the man was innocent on Saturday a hastely organised vigil was held at Stockwell Station on Sunday 24 morning. [reports and photos - 1 | 2 | 3 | 4 | audio | video ] A second much larger vigil took place on Monday 25 evening. [Pics and report | Impromptu march | Photos vigil and demo] On the following Wednesday 27 another protest took place outside the Metropolitan police headquarters at Scotland Yard. [Photos and Reports 1 | 2] [Audio interviews] 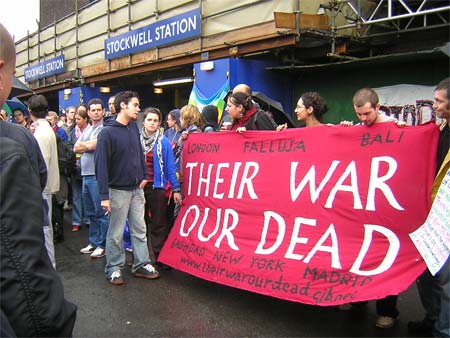 View of the vigil and protest