The world's largest Arms Fair [official website] opened its doors for business at the Excel Centre in London's Docklands. Protets took place throughout the day which included a march, a Diaper Bloc and affinity group actions.

Around 400 people marched from East Ham central park towards the Excel exhibition centre. When the demonstration reached near Prince Regent DLR station, police blocked the road to prevent the march from going further. Several speeches were made by local groups, and eventually the crowd dispersed.

Nearby, a Diaper Bloc action took place outside Custom House station, where kids donned police helmets and riot shields whilst imposing a S60 on adults inside the designated protest zone. Meanwhile a batallion of the Clandestine Insurgent Clown Army toured central London visiting companies involved in arms trade and DSEi. At least 1 arrest was reported during the day's protests and, as it is becoming common place in London, police forces continued with their tactics of surveillance and harassment. 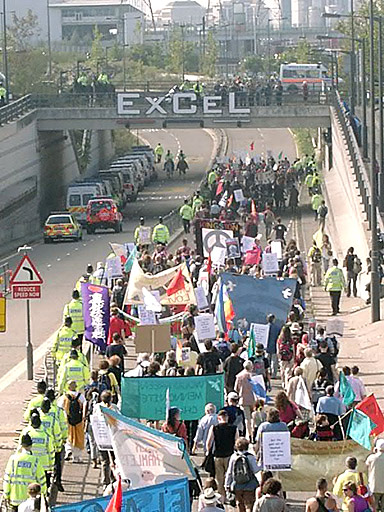