No Deportations to Iraq

32 Iraqi asylum seekers, who had been incarcerated in different detention centres, were deported to Arbil, northern Iraq, on 5 September, 2006, on a specially chartered flight from the RAF Brize Norton military base in Oxfordshire. There was a demonstration at the Home Office in London, called by the Coalition to Stop Deportations to Iraq and the International Federation of Iraqi Refugees, but that did not apparently stop the process, and neither did the warnings from international organisations [1 | 2 | 3] or the legal challenges.

The first forced deportation of Iraqi Kurds from the UK took place on 19 November, 2005. 15 men were taken to an airport at night, handcuffed, beaten and forced onto a military plane headed for Arbil through Cyprus. The move then sparked a lot of anger and protest [1 | 2 | 3 | 4 | 5], and the deportation of Iraqis was halted for a while until resumed this month. Tens of Iraqi Kurds are believed to be interned in UK detention centres, while thousands more have been served notice that they will be 'removed' from the country [latest report]. 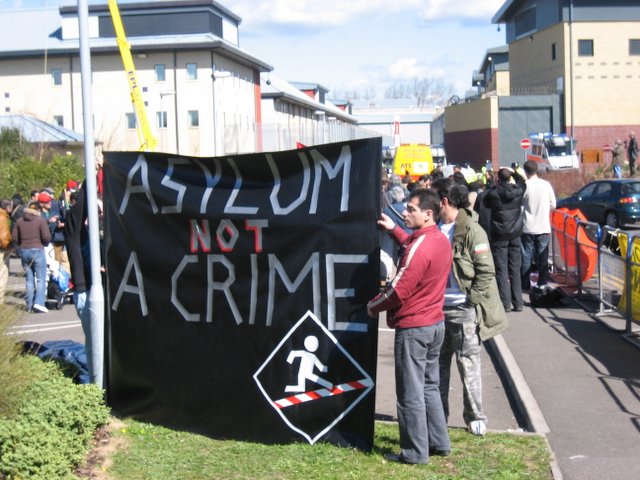 No Borders demo at Harmondsworth and Colnbrook detention centres, 8 April 2006

Further hassle for refugees - moving of signing out of town

As well as these hideous deportations from detention centres,
asylum seekers in towns are getting hassle through changes to signing.
In East Midlands, signing has been moved from police stations in the bigger towns to a special facility in Loughborough, costing much time, money and worry.

There will be a protest about this in Nottingham on Saturday. For details, see,

http://www.indymedia.org.uk/en/regions/nottinghamshire/2006/09/349873.html
Supporters from outside Nottingham will be more than welcome.

The two asylum seekers told IFIR they were very angry tired and
stressed since their experience. They reported that they had been
asked to sign voluntary return letters two days before they were
deported but had refused because they believed their lives would be
in danger in Iraqi Kurdistan.

On the morning of 5 September they were woken by nine Home Office
security guards entering their sleeping quarters. The security
guards were accompanied by a doctor who gave them a medical check.
The security guards told them to remove their slippers. They were
pushed barefoot out of the detention centre along with approximately
thirty other Kurdish asylum seekers. The guards were swearing at
them.

The KDP questioned them and released them several hours later. IFIR
asked them if they knew what happened to the other asylum seekers but
they said they didn't know.

COALITION TO STOP DEPORTATIONS TO IRAQ

Unconfirmed reports of another charter flight to Irbil have been flying around. It is supposed to be sometime next week.

There are only 10 Kurds left in Colnbrook now and, apparently, this is not enough for a 'charter flight', unless they 'use' some Kurds from other dtention centres.

These letters from a number of Iraqi-Kurdish asylum seeker who were forcibly deported on 5 September, 2006 (see

http://www.indymedia.org.uk/en/2006/09/350214.html) were received by Dashty Jamal from the International Federation of Iraqi Refugees (

http://www.federasion.org). These letters were passed to the European Council Presidency on 11.10.2006 in European Parliament.

An open letter to the Home office of the UK government.

My name is Burhan Namiq, I was born on 06/03/1980 and am from Kadamfary in Sulaimanyha City, Kurdistan Iraq. And was deported from the UK in September 2006.

Since returning to Kurdistan I have had a heart attack and it’s from my bed in a Kurdish hospital that I write this letter to you.

I sought asylum in the United Kingdom; stayed and lived there without committing any crime for two years, but you did not accept my claim for asylum and determined that I had no right to stay and was therefore subject to being deported.

That decisions made me depressed, isolated and forced me to consider suicide. I have tried many different ways at different times to end my life; by trying to kill myself using razor, by eating one box of tissues. These attempts did not work and you kept me in the detention centre until myself and others were deported to Kurdistan on the 5th September 2006. The treatment in detention and the deportation can only be described as inhuman and humiliating.

Only 2 days after my removal I was sent to hospital. I had suffered a Heart attack due to depression and the inhuman treatment I received whilst in you ‘care’.

I have asked the International Federation of Iraqi Refugees to act as my representative and have asked them to investigate my case.

To The International Federation of Iraqi Refugees,

We are a group of former UK asylum seekers. We were recently forcibly deported back to Kurdistan. We were forced to leave Kurdistan between 1-8 years ago because of the political economic and social situation in Iraqi Kurdistan.

We Emigrated to the UK looking for a better life free from political persecution. The British Government has justified our forcible deportation by claiming that Iraqi Kurdistan is safe but this is not true. In the last month the Kurdish Authorities have shot at demonstrations against lack of electricity, water supply and fuel and
arrested the organisers of these demonstrations.

We were imprisoned for several months prior to our deportation in detention centers in single cells without access to newspapers and magazines leaving us feeling cut off and isolated. On the day of our deportation we were woken up by several security guards coming into our cells. They forced us out of our rooms we were no given time
to change or put shoes on. We were treated like criminals. We were escorted out of the detention centre handcuffed and forced onto a coach. Once on the plane we were given flak jackets and caps to wear. There were two security guards per asylum seeker. We were taken straight to Erbil airport where we were forced onto the tarmac. The plane flew off leaving the Kurdish authorities to pick us up.

We are writing you this letter in the hope that you can prevent others being treated in the way we were treated. We believe the Home Office broke the Geneva Convention and the European Human Rights Convention by forcibly deporting us. We are relying on you to publicize our stories and to take our complaints forward with the Home Office
to ensure the abuse we suffered is investigated. We wish you success in your campaign to stop other Kurdish asylum seekers still in detention from being forcibly deported.