Is Britain ready to defend its NHS?

The National Health Service is in a huge crisis. Crisis can be an over-used word, but in the case of the NHS it’s difficult to get across the scale of the problem without using it. Three quarters of the NHS trusts in the UK are reporting that financial deficits are forcing them to make cutbacks. Massive cutbacks that is. Wards are closed down, hospitals shut and jobs cut around the country. Billions are going to restructure the NHS along market lines, with millions going on management consultants and financial advisors, and millions more in massive PFI payments to shareholders and bankers. In one example venture capitalists have pocketed an extra £81m million in profits from the £220 million PFI scheme to build the Norfolk and Norwich hospital. Billions more are being diverted into a new, expanding private network of profit-seeking 'Treatment Centres', which are paid at enhanced rates, and select out the profitable treatments and patients, leaving the unprofitable behind in the NHS.

Over the last few months unions, patients, activists and campaigners have hit back in a wave of protest to halt the NHS reforms around the country. Thousands of people took part in public meetings around the country: [1] [2] [3] [4]. Protestors took to the streets in Birmingham, Cambridge [1] [2], Huddersfield, Liverpool, Manchester [1] [2], Oxford, Sheffield, Shropshire and Stamford. Other protests have happened in Morecambe Bay, Bristol, the Costwolds and Wolverhampton. The largest demonstration took place in Nottingham and was joined by over 3,000 people. After the announcement that the government has awarded a £1.5 billion NHS contract to Germany-based courier DHL, NHS Logistics staff walked out at their depots.

Other media: Bad Medicine | NHS To Be Reformed By Using A Hybrid Approach | Unison wins over Labour on NHS reform 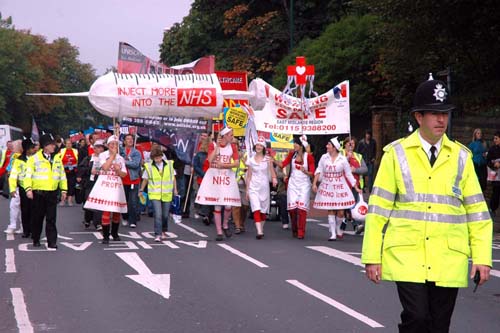 Locking up, closing down...

The 'Keep Our NHS Public' campaign has reported on a huge number of cuts, bedclosures, redundancies, facility-merges and jobcuts:

Across the country, cutbacks are contributing to an acute shortage of intensive care beds for children; a shortage of specialist nurses and winter increases in respiratory infections have been compounded by the common policy of cash-strapped trusts to ban the use of agency nurses. Over a nine -month period, Birmingham Children's Hospital alone turned away 159 referrals as a result of such problems.

Across the country, the Mental Health Act Commission, the inspection and advisory body for mental health law, says mental health is being squeezed by the financial management crisis in the NHS. It reports that "risky" patients are being sent home, that NHS psychiatry is in a state of "permanent crisis management" and that three quarters of wards breach occupancy safety margins and more than half are overflowing. Rethink, the mental health charity, has announced that mental health services are facing a funding crisis, revealing "worrying cuts" in mental health budgets.

Across the country, the National Childbirth Trust says at least 10 birth centres are now considering closing, or are definitely set to do so due to lack of funds.

Across the country, the reorganisation of PCTs and SHAs, designed to save £250m, will result in the loss of many frontline public health staff. Furthermore, a report compiled by Sir Nigel Crisp and Patricia Hewitt for the National Leadership Network, shown to the Financial Times, has indicated plans to essentially bring to an end the idea of the district general hospital. Professor Chris Ham, who left the Department of Health last June and was one of the principal architects of NHS reform, has admitted that health policy has veered into "incoherence" and reforms are dangerously "out of sync" between provision and commissioning. He said it was not clear whether the government was "willing to live with the consequences of the creative destruction" it has unleashed on the NHS. A Health Service Journal survey of 117 chief executives of NHS trusts revealed the depth of concern about the destabilising impact of government reforms. 75% of chief executives said that the current financial squeeze will adversely affect patient treatment. Two thirds of hospitals had closed wards for financial reasons. 58% of mental health trust chief executives have had to close wards, and nearly 80% said they had implemented recruitment freezes or made redundancies.

But pressure is building up...

Demonstrations were held in Cambridge, where NHS services are suffering some of the worst cuts ever seen. These include: savage reductions in mental health services, with wholesale closures of wards and centres, cuts and closures at community hospitals in Newmarket, Sudbury and other towns, ward closures in major hospitals including Addenbrooke's, West Suffolk and Peterborough, where 200 jobs are under threat, severe reductions in services at Ipswich, including banning 'obese' patients from certain operations on cost grounds and the possibility of some NHS organisations not being able to pay staff next year. See photos: [1] [2]

Manchester saw health workers and NHS users in a street protest regarding the Pennine Acute Trust crisis that threatens more than 1,200 NHS jobs in the region. The protest, led by the samba band Rhythms of Resistance Manchester, started at Victoria station and ended at Castlefield arena with a rally. The job cuts threat is due to the current NHS debt, which is less than 1 percent of its total budget. If jobs are cut, patient care will suffer. Protestors demanded that the government gives the money as it could easily afford it, rather than cut jobs which will have an impact on health services. Service users raised concerns regarding recent privatisation policies concerning the NHS and demanded that the NHS remains public. Service users and health workers stated that the NHS is not for sale. A protestor said “it is more than disappointing to see the government keen to spend money on war and killing people but not willing to give money to maintain NHS services. It is scary to realise how ‘human and life unfriendly’ this government is. We say ‘no to war; no to the privatization of the NHS, no to NHS job cuts!’ The government has messed up enough times - do not let it mess things up this time too!”. See photos: [1] [2]

In Sheffield hundreds took to the streets to oppose the closure of a ward at the Childrens Hospital and against NHS cuts and privatisation in general. Previously people picketed outside Sheffield Town Hall on the 58th anniversary of the founding of the NHS to protest against its privatisation. Read feature article.

In Nottingham over 3,000 people took part in a demonstration that stopped the city in its tracks as it passed through the city centre. A packed Albert Hall was the site of a rally after the march. Creative activist collective The Mischief Makers build a giant syringe which lead the march. The syringe read 'Inject more into the NHS' and was made in an effort to show solidarity to NHS workers as well as acknowledging that the ongoing cuts in and privatisation of the National Health Service is something that should concern everyone. The Mischief Makers also hoped to add a more creative element to march and rally, organised by UNISON. One patient from Queens Medical Hospital left her bed to join the protest. The East Midlands is an the area badly affected by the proposed cuts. This year the East Midlands faces 5,000 job losses (with 1,200 to go in Nottingham), £200 million worth of cuts, the sale of NHS Logistics, hospital ward closures, a review of NHS Direct and Patient Transport Services, and operations undertaken by private health firms run solely for the profit of shareholders. See photos: [1] [2] | full set

In and around Liverpool various announcements of cut backs were met by anger and frustation. Some 200 local people packed the public meeting in Lydiate, near Maghull in response to the threatened privatisation of GP services in Sefton East Parishes. The proposed £50 million of cuts to Liverpool's Alder Hey Children's Hospital mean that plans to rebuild the hospital in Springfield Park are in chaos, amid cuts to budgets forced by the Private Finance Initiative (PFI) scheme. The original scheme was set to cost an estimated £350m - but has now been scaled back to just under £300m. The planned new hospital has had to shrink by almost a fifth in size, as health chiefs try to save money. Wirral Hospital Trust has announced it will slash its budget by £21.5 million. It was also announced that a FTSE 100 company was to 'help' run another Liverpool hospital under controversial plans and ambulance staff on Merseyside took strike action after their employers - the Merseyside Regional Ambulance Service Trust - double-crossed them over a new pay deal. Following hard on the heels of the Liverpool Women's and the Countess of Chester hospitals, two more local hospital trusts were awarded 'foundation' status, thus opening healthcare up for private profit.

Welcome to the Birmingham area with North Stafordshire University Hospital set to lose 600 beds and 1200 NHS jobs, Sandwell and West Birmingham NHS trust facing 820 cuts; thousands more jobs are to go in areas such as local blood services. Workers, nurses and patients demonstrated against cutbacks and privatisation in the West Midlands NHS services. The demo was coordinated by North Staffs NHS SOS campaign and brought together a number of different campaigns.

Huddersfield defends the NHS. Proposals in Huddersfield to close a Hospital and several wards at another were condemed by protestors. A demonstration opposed the closures, and the wider privitisation of health care in the country. The number of protestors who turned up outside the Royal Infirmary was larger than organisers had hoped, drawing in support from passers-by. The protest is continuing to build a petition to make the council have a referendum on the issue. See photos and report.

In Oxford protests started to happen early August. Another demonstration is planned for the 14th October 'The situation is really desperately serious. The new healthcare market is corroding the NHS fast. Unless we act swiftly the Health Service will be destroyed and a costly private system will be introduced. It will be too expensive to fund from the public purse. Perhaps top-up fees will be introduced for those wanting decent healthcare and then perhaps healthcare will be like any other commodity – we will just get what we can pay for – except of course it isn’t – often it’s a matter of life and death.'

270 UNISON members employed by Initial Rentokil at Whipps Cross Hospital in London held a three day strike as part of a continuing campaign for justice and the implementation of an agreement to harmonise the pay of privatised workers with NHS colleagues.

Cambridge: Some More Photos From The Cambridge Demo Against NHS Cuts | Bury St Edmunds strikers in frontline battle against Privatisation of NHS | NHS Data Base | Riot Bunny Subverts some Minors

Assemble outside st lukes hospital, blackmoorfoot road, 11am for a feeder march to st. georges square at 12:30p.m. around huddersfield.