A Palestinian flag fluttered over the Agrexco Carmel depot in Hayes, Middlesex, for a few hours on the afternoon of Sunday 15th July. Activists entered the Israeli, 50% state-owned fresh produce importer's premises shortly after 1pm. The action formed part of an ongoing campaign against the company which is the major distributor for settlement produce. After replacing the Israeli and British flags, the activists entered the warehouse and conducted a brief inspection before some of the group D-locked themselves to a storage trailer.After disrupting business for about 3.5 hours, the group left voluntarily without any arrests. 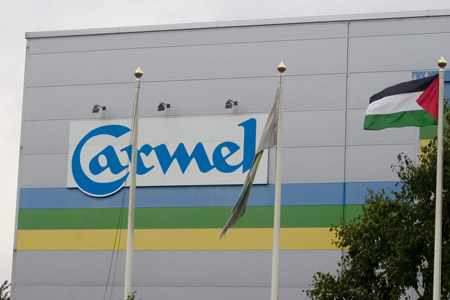 The initial reaction of the depot staff was hostile, and activists were assaulted and threatened. Leaflets explaining the action were distrubuted to staff, and others were inserted into fruit boxes waiting to be loaded for orders. Tesco was noted to be amongst the supermarkets for whom orders had already been prepared. Police arrived at the depot about twenty minutes after the action began, and staff appeared to calm down after this.

The General Manager, Amos Orr was called out, and on his arrival he seemed most upset to see his staff group standing under the Palestinian and Anarcho-syndicalist flags. Staff had seemed unconcerned about the new flags prior to this, and one staff member is quoted as saying "I don't give a damn about this war crimes and anti-semitism nonsense!" By now staff should be fully aware that the actions are against the company's involvement in marketing settlement goods, and should realise that aggression is uneccesary and pointless.

Whilst it became obvious from a fairly early point that the company would once again decline to prosecute for aggravated tresspass, police seemed happy to expend resourcesbyto standing in as company security guards. Once demonstrators were told that they could stay as long as they liked, it was clear that there wasn't even civil trespass taking place. The police and Amos Orr then conspired to place protestors at risk by threatening to move the trailer to which they were D-locked. The cops who had been monitoring the trailer decided it was time to take a stroll, as a driver, and later Amos Orr, backed up the trailer ending up inches from one of those locked on. Others reminded the cops of their 'Duty of Care' and the officers returned to end the obvious breach of Health and Safety.

The reluctance of the company to involve itself with any charges of aggravated trespass follows on from the acquittal of activists on that charge following an action in November 2004, when the company was blockaded for over eight hours. The trial ended before the defence had an opportunity to present their case that dealing in settlement goods is not lawful business. Prior to that the company had been made to disclose information about the settlements with whom it trades. Police also discovered that the company did not hold licenses for all the produce in the warehouse on that day.

Since the camapign against Agrexco started, activists have fostered relationships with Palestinians in the Jordan Valley, which is a major centre of operation for Agrexco Carmel. In audio from the action, one protestor describes how he met 12 year old children who were working for a Carmel Agrexco producer for 30 shekels a day. There is little alternative employment available, but a number of the Palestinians he met stressed the importance of taking action against companies such as Carmel Agrexco. The group is determined to keep the company under pressure.