Confrontation with authorities in Parliament Square

On 8th October, the day that the British Parliament resumed after its Summer recess, a thousands of anti-war protesters marched into Parliament Square. They were joined by people who demanded the basic freedom to be able to protest peacefully without prior police permission or conditions.

In the past demonstrators in London have been arrested, charged and fined or imprisoned simply for reading out a list of names or for carrying an innocuous banner, under the draconian SOCPA legislation brought in by Prime Minister Blair's government and carried on by his successor Brown. Since a raid on protesters' legitimate encampment in the Square by Mayor Livingstone's Greater London Authority (GLA) team on 17th August, a surrounding metal barrier has been erected which severely inhibits the ability to demonstrate there. 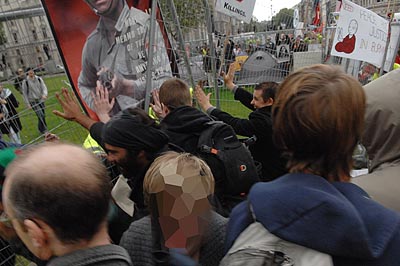